‘Think global, act local.’ This could be the motto of the group of South African people who created in 2003 a different way of trading between each other, without using any physical currency. They realized an online software to count how much every member receives and gives back to the community, according to their own talents. The Community Exchange System (CES) counts today more than 50 000 members in 750 local groups scattered all over the world. Tim Jenkin, one of the founders, explains us the concept of this innovative system.

‘Think global, act local.’ This could be the motto of the group of South African people who created in 2003 a different way of trading between each other, without using any physical currency. They realized an online software to count how much every member receives and gives back to the community, according to their own talents. The Community Exchange System (CES) counts today more than 50 000 members in 750 local groups scattered all over the world. Tim Jenkin, one of the founders, explains us the concept of this innovative system. 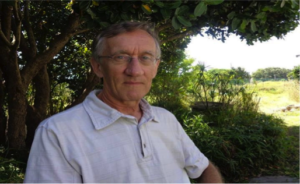 Interview conducted in February 2014 with Tim Jenkin, founder of CES.
What are the main problems of regular money today?

“It is more than just regular money. It is a lot of converging crises happening in the same time: collapsing economies, pollution, unemployment, inequalities, loss of biological diversity, resources depletion… Everything is running out, as the motive of our capitalist economy is driven by profit.

It is the money system that really drives the incessant growth of the capitalist economy. Everyone is aware of the problems of climate change, but we cannot do anything because the economic system is driven by making money. The economy does not really aim at better life for anybody. It is just robs the people, creating big companies, corporations and financial institutions. They are all just trying to make money! (laugh)

When was the Community Exchange System (CES) created, and why?

“As a result of studying these problems around the world, we realized that the only real way to overcome these problems is to introduce a different kind of logic. For example, who are running our economies? Economies should be providing our means of life, not just our means of making money. Our understanding is that you will never really change the kind of capitalist mentality as long as the economy is driven by the logic of money. The economy will always have to grow, and we come up against the limits everywhere: they have extracted almost all the resources on the face of the earth, and the big corporations are now in a difficult situation. The CES was created to try to introduce a different way of running a different kind of economy.
When was exactly the beginning?

“We started the CES in Cape Town in 2003, and a couple years before we were experimenting.

“Mostly on the internet. Each group is independent of all other groups, it is community based. When we started we called it ‘Cape Town Talent Exchange’, and then we created a number of other groups in the country, in Johannesburg, Port Elizabeth, Durban… In the first year we had 8 or 10 groups. After that, people began to hear about it around the world, particularly in New Zealand where it is very popular. In NZ there are 20 groups doing the CES, and that gave us a big boost, because it became an international system. Right since the beginning, it was possible to trade from one group to another…

… thanks to the online software you created?

“Yes. Thanks to the internet and the online software. Each group is a complete accounting entity in itself. Cape Town manages its own account and his completely separate from Johannesburg. We have our own rules, but the only thing that is common is the software. So at the second level you have groups trading with each other instead of within the groups you have individuals trading with each other.

Could you give three words to describe the spirit of the CES?

“Cooperation, concern for each other, building community. All the opposite of the conventional money economy which makes enemies and makes the pursuit of individual good more important than working together, creating cooperative economy, building things together, understanding each other, and getting to know our neighbours!

In the money system you don’t need neighbours.

In the CES you get to know your community, and if someone is not a good trader, it will soon get known in the community that you do not trade with that person who takes more and does not give back. The system tends to keep balance between giving and receiving. It is a completely open system: everybody can see the trading position of everybody else. You can’t see what I am buying, it does not record that I have bought juice today, but you can see how much I receive from the system and how much I have given back.

What was the biggest difficulty since the creation?

“We have had many problems. One of them is people joining the system, taking a lot out of it, and then just disappearing! That happens in the other direction as well: a lot of people join the system, give a lot and then leave as well. There is nothing we can do to prevent that, because we are operating alongside of the conventional system. In a sense we don’t really need this! For a lot of people, it is just a fun thing to do. They do not really understand the bigger picture or the political implications. They just think it is fun to come to a market and chat with people, and get food essentially for nothing, and then they would give something back. Maybe they repair cars, fix computers, do computer training, do massage or whatever!

If you look at the conventional money system people are also cheating and doing all kinds of bad things. It is difficult to find anyone who is doing anything honestly. So long as there are these two systems, this will continue. But if the money system collapses, then everybody will use something like the CES. I do not say this is the system, but something like this.

How do you see you organization in 10 years?

“We hope it will be a lot bigger in a context where we feel like the global economy itself is teetering on a brink of collapse. In all over the world the major economies are in a very bad shape. There is not really much scope for them to improve, because we are running out of resources, we are a brink of peak oil as we they are not finding really much new oil. As you know our economy is totally based on oil: food, transportation, fertilizers, pesticides, shops… How can this economy continue? We need something like the CES that is not driven by money, but by people’s energy! We are essentially coming back to hundreds of years in the past, when people just did things for each other in communities, and money was not really an important aspect. It is quite a modern invention.