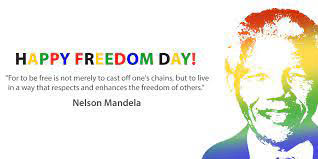 It’s Freedom Day in SA 27th April. Many of us will remember standing in multi-racial, highly diverse queues for the first time as we defied, with a peaceful vote, world predictions of a looming civil war. We talked of our ‘political miracle’, we spoke of the possibility of an ‘economic miracle’ to follow, which hasn’t really happened. We even spoke of s ‘social miracle’ with the prospects of moving towards a truly non-racial society, that hasn’t really happened either. So what is there to celebrate? Are we still and nation of Insiders vs Outsiders as Steven Friedman points out?

Christi van der Westhuizen sets out some views, and in particular the writings of Ugandan-born Mahmood Mamdani. https://theconversation.com/south-africas-1994-miracle-whats-left-

In the 1990s, a commonly held view was that South Africa had achieved a “miracle” because of its relatively peaceful political transition from apartheid to inclusive democracy in 1994.

The “miracle” consisted of South Africans talking their way out of decades of increasingly brutal apartheid rule. They struck a deal whereby the white minority relinquished power to a racially inclusive government in a constitutional democracy.

As psychology professor Pumla Gobodo-Madikizela put it, in acceding to democracy, South Africans forged a vocabulary of compromise and tolerance {to settle} differences through the politics of contestation and compromise among equals.

South Africans negotiated a democracy that replaced the parliamentary supremacy of the apartheid era with constitutional supremacy. The new constitution contains a bill of rights with the unusual inclusion of socio-economic rights alongside liberal rights. This foregrounded human dignity relative to freedom and equality, and non-racialism as a principle.

But the global reverence for South Africa as a country that could generate “an alternative meaning of what our world might be” has dissipated.

Anti-constitution pessimism and opportunism has been on the rise. A lack of meaningful redistribution of wealth has provided an opportunity for politicians to proclaim that constitutional democracy has failed. This is true for people inside as well as outside the ruling African National Congress (ANC).

Scholars influenced by decolonial theories have criticised the constitutional order as a form of “neo-apartheid” that merely perpetuates white privilege. Non-racialism has been dismissed as “colour-blindness” that hinders the correction of race-based inequalities.

But is the pessimistic view accurate?

One of Africa’s leading scholars, Ugandan-born Mahmood Mamdani, believes not.

In his latest book, Neither Settler Nor Native, Mamdani argues that South Africa has succeeded most in breaking out of colonial divisions and forging a new political community out of five countries he studied.

Looking at South Africa, the US, Germany, Sudan and Israel, he finds South Africa’s solution to otherwise persistent colonial divisions to still be the most promising, if unfinished, project.

Mamdani especially lauds the project of non-racialism. He argues that this charted a new path not set by the racial terms of apartheid, but by an alternative vision that bridges differences towards a united future.

He argues that anti-apartheid activism constructed this vision that broke with apartheid. The possibility for a new, politically forged community beyond the “settler/native” division was created through a “triple shift”.

The first shift was from seeking the end of apartheid to offering an alternative to apartheid. The second was to replace anti-apartheid majoritarianism with non-racial democracy representing all South Africans. The third was to redefine the terms for governing South Africa to terms that denied apartheid’s logic.

Mamdani contends that this triple shift created the basis for a decolonised political identity. This manifested in different ways. As examples, Steve Biko’s Black Consciousness Movement united the oppressed across apartheid’s racial lines. White activists started working with black trade unions. And the interracial United Democratic Front – an internally based mass movement – was formed in the 1980s.

This movement did not simply make political arguments about the wrongness of South African apartheid, as earlier activists did. It demonstrated what the alternative to that political wrong looked like: diverse people working towards a united political future.

Instead of pursuing punitive justice, Mamdani points out, “South Africans sat around the conference table”. He concedes that the South African national project is an “incomplete success”. Nevertheless, he argues, its citizens used engagement to open the door to becoming adversaries rather than enemies.

Mamdani points out that current naysaying of the political achievement of the 1990s loses sight of it being an essential step towards social justice.

Few anti-constitution pessimists engage with what the breakthrough from apartheid to democracy enabled politically. These critics are rightly outraged by the socio-economic ravages that most black South Africans continue to suffer. But they largely refrain from questioning the governing ANC’s failure to use its political dominance to shift state levers towards ending inequality.

Instead, the party has pursued a predominantly neoliberal policy. This has kept the country’s race-based wealth gap intact, except for the upper echelons of society.

This lack of interrogation of ANC policies feeds into the agenda of opportunists wanting to undermine the law to escape accountability for corruption. Former president Jacob Zuma is one of them.

He most recently called the democratic constitutional order a “judicial dictatorship”. The attack came as part of his efforts to justify his refusal to answer to a commission of inquiry into corruption.

Recent developments, however, show that many South Africans remain unconvinced by opponents of the constitution. Instead, efforts are underway to rekindle its vision, suggesting that the new political community that Mamdani identified is stirring again.

President Cyril Ramaphosa, the ANC’s chief negotiator during the transition, has sought to reactivate the South African imagination of the 1990s. In his inaugural address in 2019, he quoted a popular song by the South African musician Hugh Masekela called Thuma Mina (“Send me”). His aim was to urge South Africans to come to one another’s aid.

Ramaphosa has also sought to bridge the vast social chasms. This has included securing funds for a “Solidarity Fund” to channel resources from the wealthy to the poor during the COVID-19 pandemic.

Other recent events suggest that more South Africans may be returning to talking to one another. Earlier this year, the Thabo Mbeki Foundation, which has the second democratic-era president as its name patron, met a large group of conservative Afrikaner organisations. The two sides had not met since 2016.

The meeting suggested a renewed willingness among conservative Afrikaners to involve themselves in positive change. Indeed, they made commitments to contribute more actively towards solving South Africa’s myriad problems.

And in March, prominent South Africans from diverse political backgrounds came together to form the Defend Our Democracy movement. This interracial civil society grouping has the express purpose of defending the constitution against growing attacks.

The transition to constitutional democracy was not a miracle. As Mamdani argues, it was an act of political imagination which invoked a future society that refused apartheid’s divisions.

Now South Africans have to actualise that future.