Global Competitiveness is an important issue – it is a measure of how the World Economic Forum positions a country in terms of its ‘competitiveness’ as a global investment destination.

This year, and every year, the World Economic Forum (WEF) measures 138 countries on 12 ‘pillars’ of competitiveness (see diagram 2 below). There are 235 countries in the world, only 80 have a population of more than 10 million. There is insufficient data on the remaining 97 countries for them to form part of the WEF’s competitiveness exercise.

The top 60 countries in the WEF Global Competitiveness report are considered to be part of the ‘Premier League’ of nations.

“South Africa slightly improves both its score and ranking (47th, up two). It has been relatively less affected by commodity price falls than other economies in the region, and has registered marginal improvements in almost all aspects of competitiveness. Most significant areas of progress include enhanced competition, both locally (up 13 places) and internationally (up 16 places); better use of talent in terms of how pay reflects productivity (98th, up 29 places); and a small but important upgrade in the quality of education (up five places), with primary school enrolment also now passing 97 percent. However, a number of shortcomings may limit South African competitiveness going forward. Infrastructure development has stalled, both in transport and electricity, with power shortages experienced this year.

Institutional quality has diminished, with increased political uncertainty, less transparency, some security concerns, and business leaders having less trust in politicians (down 11 places since last year). The slowdown of the Chinese economy and exchange rate volatility may dampen growth, now forecast at 0.1 percent for 2016. This makes it unlikely that the high unemployment rate will diminish soon, hampering the ability to leverage Africa’s demographic dividend.”

Rankings that may interest:

We need to consider ‘competitive rankings’ in all three.

BUT, is that all that’s happening in SA? 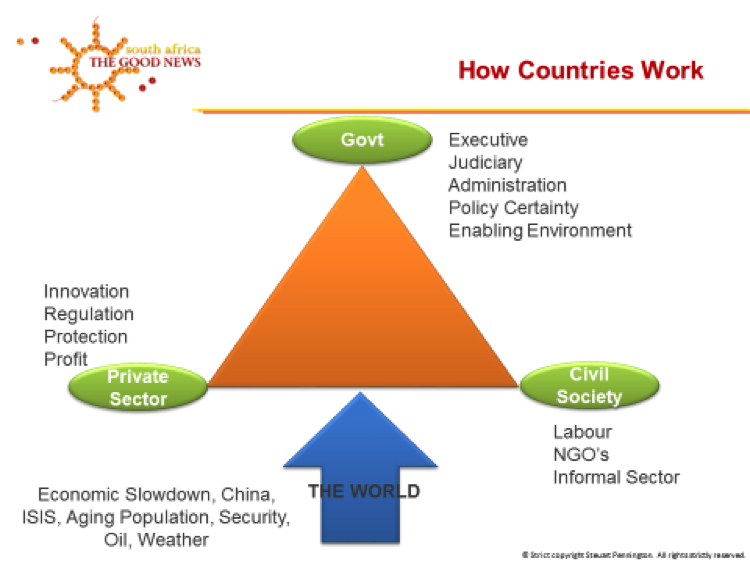 But the World Economic Forum is interested, and goes to considerable trouble to measure developments in all three sectors, across 12 pillars, using +/- 150 measures (see Diagram 2 below). 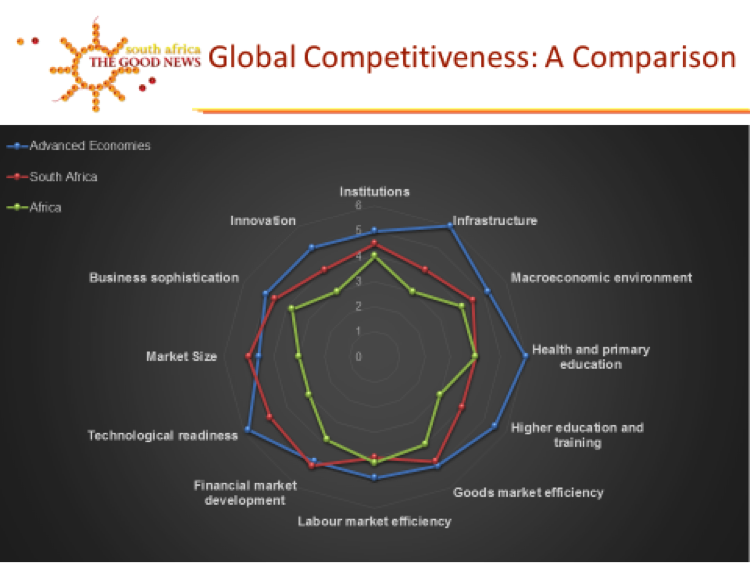 When compared with many of the world’s top 60 developed countries we do well except in the areas of health, education and infrastructure. BUT, when compared to the world’s developing countries (of which we are one) we do VERY well – especially in the context of Africa.

BUT, the devil is in the detail

In Diagram 3 below I have compared where we do BEST and WORST in the WEF Report I have shown how we were ranked in 2009 and how we have improved/slipped from 2015 to 2016, in that order. 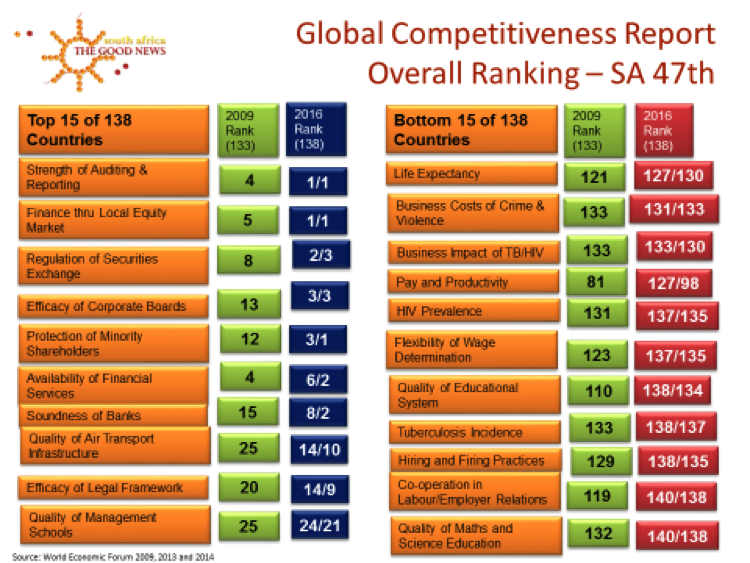 This is a good story, our competitiveness as a country has improved 9 positions over the past two years (no other country can claim the same).

Our campuses, our parliament, our president, our corruption, our rugby, our drought, our economy, our politics gives us too much to obsess with and grumble about.