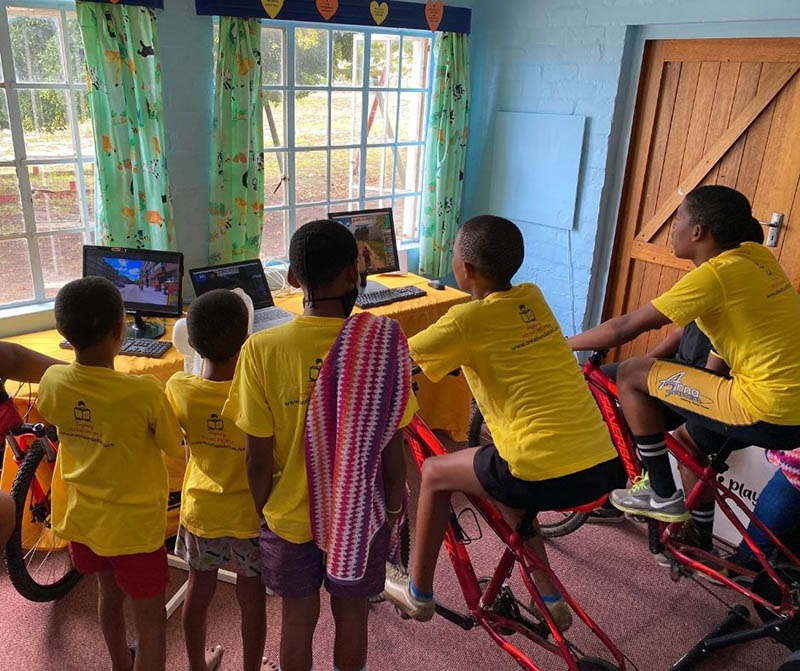 Stellenbosch, 17 March 2021: Fans of the Absa Cape Epic may be familiar with the sea of bright yellow t-shirts belonging to learners of the Anna Foundation, one of the event’s official charities. Year after year, the non-profit organisation which has 16 after school centres serving over 700 school-going children in rural and farm areas, brings small groups of school-goers to the race villages to support their charity team riders and help raise awareness and funds for rural and farm education.

This year, in the face of a delayed Absa Cape Epic 2021 (postponed to October 2021) and following a cancelled event in 2020, the Anna Foundation has been proud to show its support and solidarity in a new way; by participating in the Virtual Cape Epic 2021 which took place in March on the online cycle training and racing platform Zwift.

This has been a year of many firsts. Not only was this virtual event the first mountain bike stage race to be hosted on Zwift. It was also the first chance for Anna Foundation learners to ride on a smart trainer (a tool used to mount a bicycle that offers resistance, but also has an added benefit of allowing cycling apps like Zwift to control the resistance). It additionally gave learners their first opportunity to take part in an international timed cycling event and ride alongside cyclists from all over the world.

“To say that our budding cyclists were excited about participating in this prestigious cycling event is an understatement,” says Founder and Director Anna Brom. “Overall, the event was a huge success that drew a lot of attention and support from both staff and students alike.”

Cyclists were selected from two Anna Foundation after school projects at Kanonkop and Neethlingshof Wine Estates, chosen according to their age, skill and fitness levels. Brom herself also took part in the event, completing all four stages and covering 73.4km and 788m of climbing. This was no mean feat as she is traditionally a trail runner and relatively new to cycling.

Since becoming a partner of the Absa Cape Epic in 2015, cycling has become an important part of Anna Foundation’s weekly sports programme, with learners receiving regular bike skills training at various public community pump tracks in the greater Stellenbosch area.

“It was wonderful to see our students using their acquired cycling skills in a new, competitive environment, says Brom. “Exposure to events such as these are invaluable in motivating and inspiring our learners to keep their dreams big and continue working hard towards a better future that is full of possibility.”

The Absa Cape Epic plays a significant role in raising funds to cover the Foundation’s annual operations budget. This budget is used to pay facilitator salaries (there are over 50 of them), and scholarship students’ school fees, as well as for the purchase and maintenance of educational and sporting resources, such as stationery, computers and bicycles.  Changes to the way that events are being run as a result of COVID-19 are likely to have a future impact on the organisation’s ability to raise much-needed income. This is due to a variety of factors that are unlikely to change in the short to medium term, such as number restrictions on spectators and participants at events, which reduces brand exposure and footfall.

To counter this, the Anna Foundation has created a GivenGain fundraising platform, where interested individuals or companies can show their support by making an online donation. To make it sweeter, farm partners Kanonkop and Neethlingshof have donated a mixed case of Kanonkop wines and three magnums of Neethlingshof Cabernet Sauvignon 2014 which will be given away to four random donors. To enter the raffle and donate towards rural and farm education in the Western Cape, click here.