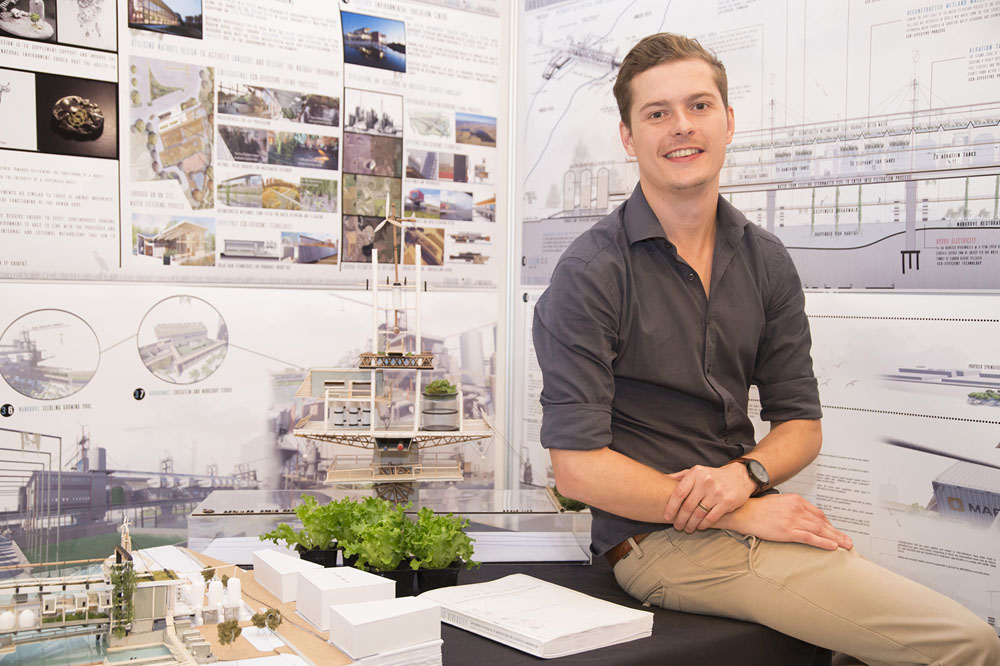 New and distinctive ideas, a high standard of technical skill, creative flair, a good grasp of sustainability issues and a clear understanding of the complex role of built structures within an evolving urban environment were just some of the reasons why Jean-Pierre Desvaux De Marigny from the University of KwaZulu-Natal won first prize at the Corobrik Architectural Awards in Johannesburg this evening.

The competition, which has spanned three decades, has seen considerable changes in how young professionals in the architectural professional approach the built environment. Today, technological advances and sustainability imperatives are driving creativity.

Innovation with a view to lightening the built environment’s environmental footprint together with an innate understanding of social and cultural imperatives within South Africa are just some of the reasons that this year’s judges singled out De Marigny’s dissertation.

De Marigny was one of eight regional winners from the country’s major universities who were chosen during 2016. Each winner became a finalist who competed for the national title.

His thesis, entitled ‘Design for [bio] diversity’, explored the potential of architecture for ecological conservation, proposing an environmental awareness and water research facility in the context of Springfield industrial park/ uMgeni River catchment area in Durban.

De Marigny’s proposed architectural solution aimed to draw an analogy between the machine-dominated environment of the Springfield industrial park and the natural ecosystems found within the uMgeni river. This was achieved through the concept of viewing architecture as similar to that of a mechanical prosthetic device, so that the architecture (industrial machine) could begin to act as rather a natural life support system in the context in which it exists (ecology).

Attaching to an existing 440m long pedestrian walkway bridge spanning the width of the river the facility hosts minimal ecological footprint, in addition to providing direct access to the water body to ecologically filter both surface (plastics, rubbers, geo-polymers) and subsurface (human, industrial, agricultural) water pollutants that are accumulated as the watercourse passes through habited areas before reaching Durban’s coastline.

As a result, both the technological and ecological solutions used allowed the architecture to act as a positive hybrid energy contributor, provide space for rehabilitation processes and is able to consistently produce and provide the public, tourists and researchers with fresh fish, vegetables, plants, seeds, flowers, biogas, fertilisers and clean water, who then have the option to relax and enjoy an organic meal, while overlooking the river, or take part in the various educational, ecotourism and research programs facilitated on site.

Supervisor and lecturer, Bridget Horner, said that the highlight of the winning thesis was the location of the site and its potential vista toward to sea and into Durban.

“The project impressively straddles one of Durban’s most beautiful rivers, the uMgeni River, as well as the existing pedestrian bridge.  The architecture is a machine that filters dirt from the river and draws water up into its water purification plant – filtering water so that, in the process of moving over the infrastructure, the purification of water as a process is visible to the pedestrian,” she explained.

She noted that the project drew its architectural language from the cranes and containers that occupied the Durban harbour. This was in keeping with the architecture’s role as a mechanised prosthetic device supporting the river in flushing out its impurities before they meet the sea.

Meyer said that Corobrik’s range of high quality brick and building products together with its own technological advances were what helped bring design ideas from young professionals to life.

Technological advances had driven down the embodied energy of clay brick. New extrusion technology had reduced fuel use by up to 20 percent while the use of natural gas for the firing of products had nearly halved the carbon footprint of clay brick manufacture, he said.

“The two factors matters driving change in our factories have been a need to achieve incremental reductions in energy consumption and hence lower greenhouse gas emissions and a desire to innovate in order to provide our customers with even better products with concomitant productivity improvements,” he noted.

The new 10 core holed brick that resulted from the introduction of Corobrik’s extrusion technology achieves the latter.

Meyer said that a lighter mass brick improved productivity. The National Productivity Institute had established that a bricklayer doing straight brickwork using bricks with an individual mass of 2.9kg would lay approximately 690 bricks in a day. A new 10 core process reduced brick mass to 300g, increasing productivity to 769 bricks per day.

The lighter mass of the bricks also allows more bricks to be loaded onto vehicles for transport, lowering greenhouse gas emissions per 1,000 bricks delivered.

Meyer added that Corobrik had also introduced unique robotics’ technology at its Rietvlei and Lawley factories. Once again, this would reduce energy consumption and reduce greenhouse gases whilst also giving our customers even better products.

“The consistent gaps in the setting pattern achieved by the robotics allow for easy access of heat during the drying and firing processes which optimises the amount of energy required for brick production. Product quality is significantly improved owing to the precision handling of ‘green’ products by the robots which eliminates handling damage resulting from manual setting. This minimises defects which means fewer rejects and a better quality, uniform, end product for our customers,” he concluded.

Jean-Pierre Desvaux De Marigny is the winner of the 30th Corobrik Architectural Student of the Year Awards. His entry, entitled ‘Design for [bio] diversity’, explored the potential of architecture for ecological conservation, proposing an environmental awareness and water research facility in the context of Springfield industrial park/ uMgeni River catchment area in Durban.

A selection of photographs will be available within 48 hours. Illustrations of the thesis and a full synopsis are also available.    Please contact Shirley and let her know what you need.