The Promise of our Beloved Country – the very best of times and the very worst of times? 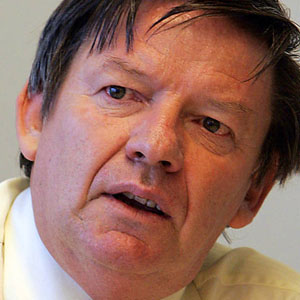 The worst of times

There are many ways in which the country in which we live in 2017 is experiencing some of its worst times.

We can start by reminding ourselves of the three major structural faults – the geological faults if you will – in our society, economy and policy. These are clearly identified in the country’s national Development Plan as unacceptably high levels of poverty, unemployment and inequality.

These worst of times are also captured in a series of events. Here is a list that I am sure is far from complete: Nkandla, Marikana, Esidimeni, the State of capture report from the Public Protector, the crisis surrounding the paying of social grants to 17 million South Africans, a Cabinet at war with itself, growing racism (white and black) increasingly evident in both our public discourse and also in our social media.

None of these events belongs in the South Africa millions of citizens voted for in 1994. None should have happened, none should ever happen again. 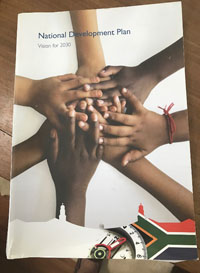 Let me start with the National Development Plan, and the National Planning Commission which produced it. This planning commission was appointed in 2009. Under the leadership of former Finance Minister Trevor Manuel it comprised 25 other commissioners, each of them appointed in their personal capacity. I first I think for post-Apartheid South Africa. It was tasked to produce a long term plan for our country, again a first in our post-Apartheid history.

As already noted the National Development Plan identifies three structural challenges to realising the promise of our country: poverty, unemployment and inequality. The Plan also suggests some anchor values which should guide our country’s effort to address these problems. The first of these is that the effort needed is not an effort of government alone. The plan produced is a plan for South African society – not just government. Perhaps the single most important new emphasis in this plan is the role of citizens in implementing the plan. Citizens have not only rights but also responsibilities. Citizens also have power. In particular they have both the responsibility and the capacity to “sweep their own backyards”.

Of course a plan is only as good as it implementation. The implementation of this plan has been slow, sporadic, and often contradicted by actions of precisely the opposite character. However at least we have a twenty year plan. And when the plan was presented to Parliament in 2012 all 11 parties represented in that parliament supported it. The plan offers a basis for cross party co-operation.

If the first green shoots of the ‘best of our times’ is evident in the values of the National Development plan a second green shoot is to be found in the new voices in our public discourse.

Nowhere is there a more dramatic example of these new voices that in the drama that has been unfolding in our universities -particularly since 2015. These voices have been angry, confused and confusing. Across our 26 universities they have been marked by relatively isolated instances of burning and violence. At the heart of this youth rebellion is a call for university education that is affordable and also relevant to economic, social and political realities of our times. 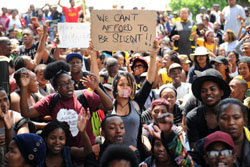 These voices raise troubling issues which defy easy answer. Of course nothing in life can ever truly be free. The challenge is simply who pays. If the true cost of educating a university student is R150,000 a year then the bill for the 1 million currently enrolled students (*622 000 at 25 Universities with 400 000 enrolled at UNISA) would be R1,5 trillion, which is equal to this year’s national expenditure budget. It is equally true that our universities are being asked to accommodate more and more poorly prepared and poorly resourced students with less and less resource to do so. This is captured by the simple statistic that since 1994 enrolled university students have increased threefold but teaching staff have only doubled.

Why the do I see these angry, confused voices as a hopeful green shoot? These voices are a sign of hundreds of thousands of young people assuming the mantle of citizenship. Demanding of their leaders more and better. Determined to move from the spectator benches onto the field of play. A number of commentators have compared the #FeesmustFall protests to the high school protests of 1976. In both cases this outburst of anger and protest took the ruling elite by surprise. In both cases this elite had no compelling response.

The strongest green shoot I see in my country in 2017 is however the behaviour of many critical institutions in our society.

Let me take what is perhaps the most recent and dramatic example.

When has the South African Parliament in its long life since 1910 ever conducted an enquiry into a failing state institution as effectively as the recent enquiry into the SABC. Here were parliamentarians doing their job across the lines of both colour and party affiliation. On national television. Hopeful this is the first of many parliamentary enquiries to come. 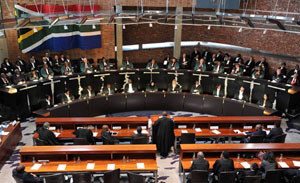 Another critical institution showing signs of astonishing vitality and integrity is our judicial system. Our courts from the highest court in the land, the Constitution Court right down to decisions of our magistrate’s courts, judges are doing their job.

And many of the crucial judgements, for example on the Nkandla and State capture reports of the Public Protector, were broadcast live on national television. This means that our citizenry has had a superb class in the meaning of a constitutional democracy.

In another of our critical institutions: the media; green shoots abound. Like everything else this side of heaven the media is far from perfect. However it is at least as diverse, courageous, and persistent as it ever has been in our country’s long history. If not more so. And increasingly this courage and the capacity to speak truth to power crosses the old lines of division between race, party and even ideology.

There is a final institution showing clear sings of green shoots. And that is in our politics. If we look only at the newspaper headlines about factions and succession in the ruling party we will miss these green shoots. Political commentators have long argued that a country cannot claim the status of a democracy until power has been transferred (at least once) between competing political parties. Just a few years ago South Africa seemed very far away from that. Yet in last year’s municipal elections the ANC lost power in three major metros: Pretoria, PE and Johannesburg. Opposition coalitions govern these cities. 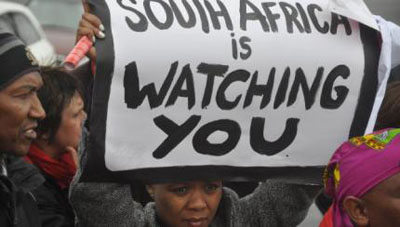 And the change is our politics is evident in more than electoral outcomes. Increasingly issues unite the politicians we elect to govern us across party and ideological lines. So two opposition parties (the EFF and COPE) refuse to acknowledge President Zuma’s legitimacy. But the representatives of these parties give members of the judiciary standing ovations at the SONA debate, and recently gave a similar standing ovation to our Finance Minister. SASSA, the SABC and the nuclear deal are producing coalitions across party lines that carry the promise of a meaningful debate about not only who governs, but how we are governed.

There is one final area of green shoots, of hope, of optimism, I want to suggest. Like any green shoot it is not always recognized.   It is this. Increasingly our citizens in securing their own best interests are expecting less of their government and more of themselves.

Let me illustrate this not obvious point through two racial lenses. Under the “whites first, everyone else second” Apartheid order of things all whites benefited from the colour of their skin. High quality education, healthcare and policing for example (where the best was always reserved for whites) benefited all white people. Many white business people benefited from the selective support of the state. [Some in this audience may be old enough to remember the times when the only bank to be found in an airport or major railway station was Volkskas.] State employment, state procurement, and indeed state patronage in the broader sense of the word, favoured whites. All of this ended in 1994. Yet the economic well- being of white South Africa (or at any rate the vast majority) has gone up on the last 23 years. Whites increasingly are relying on their own individual skills, efforts, energies, networks to use what they have to get what they want. And it is working for them.

Exactly the same pattern is beginning to emerge amongst black South Africans. A breed to truly individual black entrepreneurs is increasingly evident. These entrepreneurs use what they have to get what they want. Increasingly they do not want to work for government, whose payments are irregular and patronage depends on factions.

These black and white entrepreneurs now constitute the most innovative and dynamic sector of our economy. And we must celebrate them.

What then does 2017 promise for our beloved country?

I have tried to outline some sort of balance sheet for South Africa. The liabilities of these worst of times. The assets of our green shoots and the best of times.

South Africans seem to have a love affair with Armageddon. We lurch to the precipice, gaze over, and have thus far decided “not today”.

I am hopeful we will navigate the rapids of 2017. We are in much better shape to do this than in previous times. We have independent courts, competitive politics, a robust media, and increasingly active civil society. And an enforceable constitution.

For some years our country has been caught between two compelling but incomplete narratives. The ANC tells us “we have good story to tell”. Its opponents speak as if the country was already failed state, and becoming Zimbabwe.

The truth is that South Africa in 2017 is a much, much better place than it was under Apartheid. If you need reminding of this check out a recent publication from that good Liberal institution the Institute of race Relations. This body released a report called Silver lining just before the most recent state of the nation report.

The truth is also that we are not nearly the country we want to and can become.

Few of us in this room can decide what will happen to President Zuma, and who will succeed in the ANC’s elective conference. We probably cannot shape what the ratings agencies will do about the two trillion Rand of national debt. We can however shape the way we, and our fellow citizens create and use wealth. We can also build a non-racial society starting with our families, extending to our communities and work places.

There is a famous Afrikaans saying which sadly has been shortened in memory.”Alles sal regkom” said the remarkable mid Nineteenth century President of the Orange Free State Republic Jan Brand. But the quote continues “as elkeen sy plig doen.” If it was true then how much more is it true now?