Bill and Melinda Gates 2020: “Progress is happening across the globe, but more work remains to be done to reach the SDG targets” 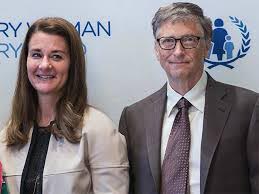 Johannesburg – February 10, 2020 – Today, Bill and Melinda Gates share their 2020 Annual Letter. It celebrates the significant progress made to alleviate poverty and tackle health issues across the globe.

The letter, titled “Why We Swing for the Fences: Reflecting on the First Two Decades of Our Foundation” reflects on some of the risks they’ve taken in health and education.

“At the core of our foundation’s work is the idea that every person deserves the chance to live a healthy and productive life,” write Bill and Melinda Gates. “Twenty years later, despite how much things have changed, that is still our most important driving principle.”

South Africa is a great example of the progress outlined in the letter. Since 2010, the number of AIDS-related deaths have decreased by 50%, from 140,000 to 71,000, which has contributed to increased life expectancy at birth in the general population. In 2018, 90% of people living with HIV knew their status, 62% were on treatment, and 54% of people with HIV are virally suppressed.

While the number of South Africans who know their HIV status meets the global target, the number receiving treatment and viral suppression falls short. The Annual Letter highlights the health inequalities facing young women and girls in Eastern and Southern Africa. Notably, girls and young women aged 15 to 25 in Eastern and Southern Africa account for more than two thirds of new HIV infections.

The foundation will continue to support innovation and work with partners to overcome challenges in HIV prevention and treatment. This year’s Annual Letter highlights that in 2018, nearly 19 million people received lifesaving HIV treatment in countries where the foundation focuses investments, and the organization is looking into new treatments to prevent HIV transmission.

“There is no question that this new decade is beginning at a time of tremendous unrest and uncertainty around the world,” write Bill and Melinda Gates. “But even in a moment as challenging as this one – in fact, especially in a moment like this one – we remain committed to supporting advocates, researchers, government officials, and frontline workers who are making a healthy and productive life possible for more people in more places.”

To read the letter in its entirety, visit www.gatesletter.com