One of the world’s most innovative live music experiences – the Red Bull Culture Clash – will storm its way onto the Orlando Stadium stage on 23 September 2017.

A sound system battle of epic proportions will unfold as four crews, each fronted by headline artists including AKA, DJ Tira, Patoranking and Admiral and Jahseed, will represent four of South Africa’s biggest sounds – hip hop, house, afro-beats and reggae. The four competing sound systems will compete back-to-back over a series of rounds – all in a bid to get the biggest reaction from the crowd and be crowned as the 2017 Red Bull Culture Clash winners. 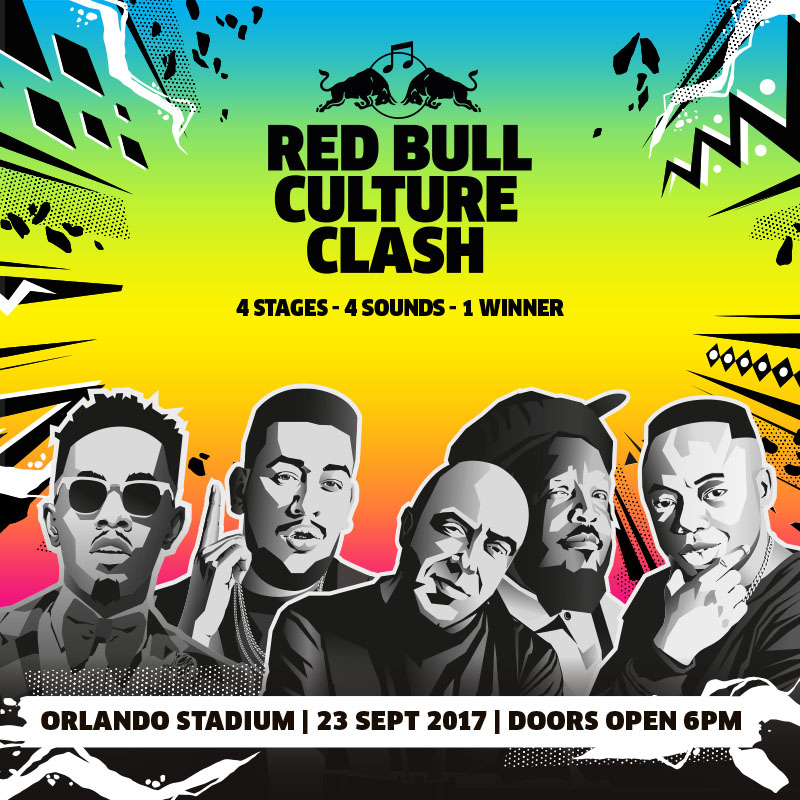 AKA, hip hop crew leader has promised fans a killer performance, vowing he is coming for everything: “I’ve put together a team of some of the best musical minds South Africa has to offer. You ask me what my objective or plan is for Culture Clash? It’s simple enough: I’m here to win. Nothing else!”

Holding no punches, Admiral and Jahseed are both getting ready for retaliation on behalf of dancehall and reggae supporters: “We’re preparing for war right now: arming ourselves and looking forward to the battle!”

The Red Bull Music Academy, Red Bull’s longest-standing music programme, now in its 19th year, introduced the Culture Clash concept in the UK in 2010, and it has since made its way around the world, including events in New York, Lisbon and Paris. Red Bull Culture Clash itself is based on the classic Jamaican sound system culture, but with a twist. It’s defined by the use of cutting-edge lyrics, fierce competition and ridiculously loud sound systems.

An essential feature of every clash is the ‘surprise factor’ and South African fans can expect some epic surprises on the night. These include exclusive and custom dubplate specials made up of unique songs recorded by a crew that only they can play. Crews are encouraged to introduce special guests, including a host of artists, on the night as part of their arsenal of musical weaponry they bring to the battle.

Be part of the action by getting your tickets for the Red Bull Culture Clash 2017 event from Computicket.

NOTES TO THE EDITOR:

Red Bull Music Academy is a world-travelling series of music workshops and festivals. Two groups of 30 selected participants—producers, vocalists, DJs, and instrumentalists from around the world—come together in a new city each year for two weeks of collaborations, lectures, and performances. The Academy began in 1998, and has been traversing the globe since. In 2010 it took place in London, when the first Culture Clash was hosted as part of a five week-long city festival. See www.redbullmusicacademy.com  for more details.

About the track used in the trailer

The official Red Bull Culture Clash trailer includes the recently released track Dlala by Cape Town based music duo Stiff Pap. Made up of rapper AyemaProbllem and Afro future electronica producer Jakinda, Stiff Pap recently launched onto the local music scene with an eclectic sound that combines a mix of kwaito, house, hip hop and gqom. Listen out for their unique sound throughout the Red Bull Culture Clash campaign https://soundcloud.com/red-bull-studio-ct/stiff-pap-dlala.

Distributed on behalf of Red Bull South Africa by: