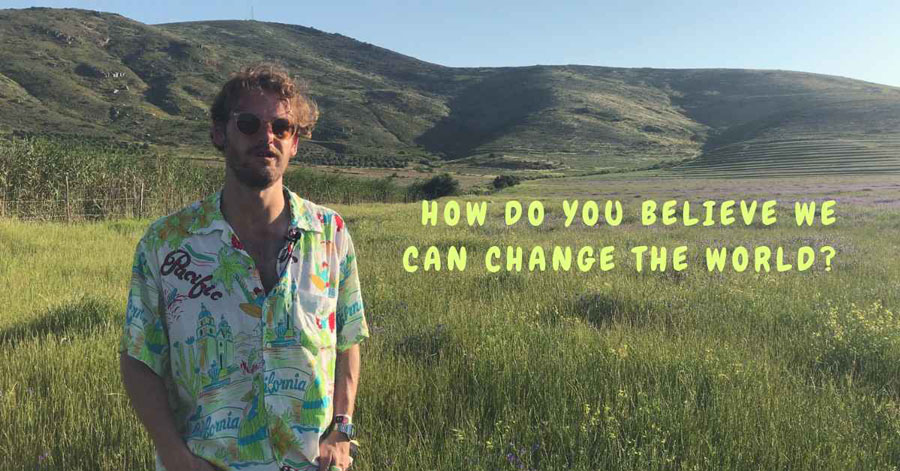 Rocking the Daisies is a festival just outside Cape Town where musicians blare out beats and let out lyrics to get the crowd moving and on their feet. Music is one of the most powerful ways to connect with a human’s soul and because of that, it has the ability change the world. In that vein, we wanted to find out what got some of the artists’ blood pumping and asked them: “How do you believe we can change the world?”

While hustling my way back stage, I bumped into Nick Hamman, MC for Rocking the Daisies and a 5FM DJ. He jumped at the opportunity to share his view on changing the world saying: “Great minds can come from anywhere. You have to give every person you meet the time of day because they might just be somebody who can change the world.”

One of the bands that stood out from the crowd was Femi Koya, an Afro-Jazz band with members from all over Africa. They Rocked the Daisies in African robes and inspired all who watched with a message of integration. Femi Koya, a man so down to earth he makes gravity seem unstable answered the question saying: “The only way to change the world is to let LOVE lead. Treat everyone equal and fair [and] the world will be a better place.”

Music is about expressing yourself and having fun. Ben Dey and the Concrete Lions certainly did that with the whole crowd throwing their arms and legs around like spaghetti in a colander. Alex Birns, artist and drummer in the Concrete Lions, expressed himself saying: “I think we can change the world if we learn to respect each other more… and use our privilege to help those not so fortunate.” The band’s bass guitarist, Dillon Birns felt similarly saying: “I think that believing in yourself and knowing that what you’re doing is good can make the world a better place.”

For all you rock n rollers out there, fear not, punk rock does still live on in South Africa. Andre Vlok, the bass guitarist for Retro Dizzy said that drinking as much beer as you can in the morning and in the evening is the best way to save the world and while I don’t agree with him, it’s lekker to see punk rock living on in South Africa.

Rocking the Daisies might have made a couple controversial choices this year by not allowing people to bring their own booze and making people pay extra for camping, but I must say the integration rocked more than anything. The fact that there was such a diverse and incredible crowd where everybody felt included and had a space to belong made me truly honoured to be a South African. It made me feel like we’re heading on track towards integrating our country and that we just need to encourage everyone to play their part.

“A million steps start with only one step. If you start on your own, we can change the world. Let’s not wait for one another, let’s start by ourselves and see the change [in the world] from there on”. This is how Gali Ngoveni, the bass guitarist in Femi Koya, expressed his thoughts on how he believes we can change the world.. Let’s focus on the big things but start with the small things because it’s the small things that will lead to exponential change in the world.