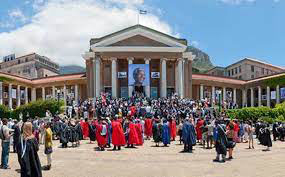 It is estimated that there are 20,000 universities globally, South Africa has 26.

There are a number of agencies which rank universities; The QS Survey, The Times Higher Education Survey and the Centre for World University Rankings (CWUR) to name a few.

The CWUR grades universities on four factors without relying on surveys and university data submissions: quality of education (25%), alumni employment (25%), quality of faculty (10%), and research performance (40%).

This year, 19,788 institutions were ranked, and those that placed at the top made the global 2,000 list.

By the way, none of our universities are in the bottom 10 000

But is this cause for celebration?

South Africa’s universities continue to decline in the rankings, with all but three local institutes dropping down the list. This follows the trend seen in 2020, where only two universities managed to climb the rankings.

The concern is that South Africa is struggling to compete against rivals worldwide mainly because of lack of funding particularly for research performance (40%), we continue to hold our own on the other three measures : quality of education (25%), alumni employment (25%), quality of faculty (10%).

Regionally, South African universities occupy the top four positions on the continent, ahead of Cairo University. Among Africa’s top 10 institutions, seven are from South Africa, two from Egypt, and one from Uganda.

Commenting on the national picture, Dr Nadim Mahassen, the president of the Center for World University Rankings, said: “It is encouraging to see 13 institutions from South Africa among the world’s best.  “However, the broader story for the country is more concerning, with three-quarters of its universities falling down the standings due to declining research performance and intensified global competition from well-funded institutions.

Dr. Nadim Mahassen concludes “To compete globally, the government needs to invest more in public universities. This will enable them to improve both research productivity and research quality by producing more research articles in high-quality journals, which will naturally lead to more citations within the academic community. High-quality research is crucial not only to university rankings, but also to the advancement of South African society.”

This is a typical “good news/bad news” story, and let me just add that university rankings are very controversial, particularly amongst University staff who argue that they are superficial in that they don’t take account of the challenges facing the developing world in respect of university education. South Africa is a case in point, the diversity/inclusivity/fee paying challenges we have are as significant as they are different from those in the developed world!

Source: Center for World University Rankings (CWUR) a link to the full results at https://cwur.org/2021-22.php