A Film by Joe Pistcatella, the Mason Brothers and Chris Bertish 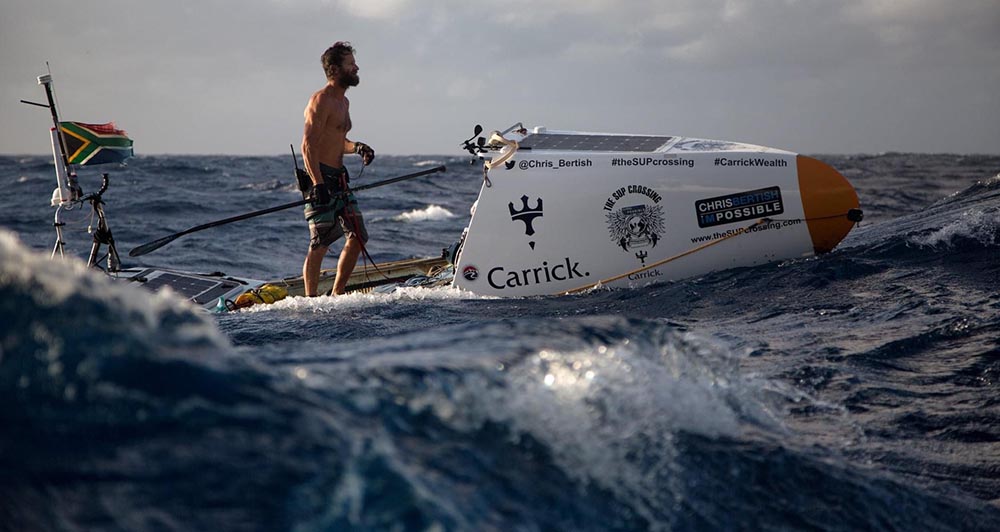 “It’s like attempting to climb to the top of Everest without ever having somebody reach base camp.”

Available Worldwide on Apple iTunes and Vimeo On Demand

When big wave surfer, speaker and ocean pioneer, Chris Bertish decided he would stand up paddle across the Atlantic Ocean, completely alone and unsupported, his friends, family and everyone thought he may have gone crazy, while his fans openly suggested he’d die trying. But Bertish was a man sustained by some deep well of motivation. He had already proved himself as an elite extreme athlete by winning the Mavericks Big Wave competition, arguably the biggest accolade in the dangerous sport and held multiple Stand up[ paddle records. But his next endeavour had never even been attempted. It would take him putting everything on the line just to get to the start line and from there, he would face a new reality; the constant struggle of trying to stay alive on a tiny craft, in the middle of a massive ocean with only a paddle and himself to rely on…

The much anticipated documentary film on Chris Bertish’s ground-breaking journey is set to launch globally on the 17th August on TVOD platforms like Apple iTunes and Vimeo on Demand. Visit www.lastknowncoordinates.com for details.

The film shows remarkable first person footage that Bertish shot himself on the crossing, where he faced raging storms, numerous failing navigational systems, water shortages, injury, while dodging super tankers and close encounters with sharks. Not to mention the incredible strain of complete isolation for more than three months in the equivalent of a floating sofa.

It’s a film that redefines the limits of human endurance and which will shock and inspire, showing what it takes to pursue a dream that others have feared to have and the courage, passion and resilience to follow it through.

Written by: Joe Piscatella and the Mason Bros.

When Chris Bertish first started talking about wanting to cross the Atlantic Ocean on a SUP craft, alone and with only his small paddle to power him, most people, ourselves included, thought it was crazy. In the lead-up to his launch, there was a palpable feeling that things could end badly. But Chris Bertish had an unwavering belief in himself and his purpose and could not be deterred. Yet, it was not the questions of ‘if’ or ‘how’ Bertish would cross the Atlantic Ocean that initially drew directors Chris Mason and Luke Mason to the idea of helping Chris make the film about his journey. For the Mason Brothers, a deeper question burnt; why? What drives a person to stand up paddle solo from Africa to North America? When exec producer Bruce Macdonald got involved and approached Joe Piscatella to be a part of the filmmaking team, he felt as overwhelmed as Chris Bertish did when he first paddled away from the African shoreline. How do we tell this story? That was Joe’s first question. There was no shortage of on screen adventure with the constant terror of leaks, storms and sharks. But as the directors got to know Chris Bertish, they came to understand that this was not just a story about one man’s epic quest to set a world record; this was a story about a man who believed he could change the world and was willing to put everything on the line, in his attempt to do so, and that was a story worth telling.

–Joe Piscatella and the Mason Bros.

A Film by Joe Pistcatella, the Mason Brothers and Chris Bertish

For more information on Chris Bertish follow along on these channels: