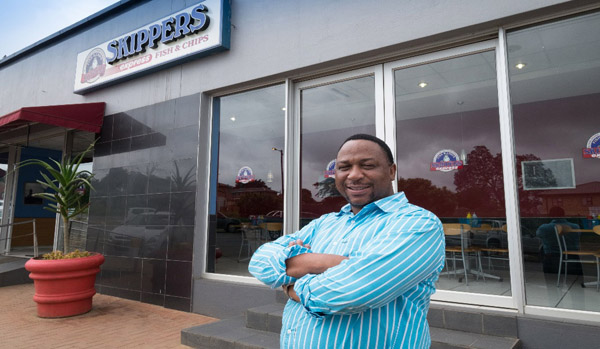 Even dreaming about becoming an entrepreneur was too much of a luxury for Christian Shabalala as he grew up in the grinding poverty of the rural outskirts of Ladysmith. Every day as he walked the many dusty kilometres back home from the farm school, gathering the family’s few cows along the way, his most audacious dream was of having a job as an agricultural adviser one day. Dreaming of actually having a farm was just too far out of reach.

Today, he has a farm, a small holding, a trucking business, a verge-maintenance company and four fast-food franchise outlets. It has been an epic, improbable journey for Christian (40) who had no foresight of an entrepreneurial future growing up, only an ever-present hunger for success.

He attributes this to his mother, who raised her six children as a widow. She only had Standard 1, but could read the Zulu bible, “and she was very ambitious for her children,” says Christian.

After matric, he went to study horticulture but as the second youngest sibling there was not enough money to continue and after a year he found a job as a technical assistant at the Agricultural Research Council and studied part-time.

For his extended family and circle of friends, Christian’s full-time, skilled job meant that he had already made it out of poverty, and was doing exponentially better than his father, who never went to school and worked as a manual labourer all his life. As a result, when Christian opted to resign from his job after just three years in favour of a year-long area-manager contract with the Department of Water Affairs and Forestry, his family was shocked.

The criticism, which came from everyone he knew except his mother who supported his decision, became a further motivator for Christian. It crystallized his desire for success and although he had no set path, he decided then that his financial security was never going to be tied to a mere job, but that he was going to achieve it through hard work and exploiting every opportunity that crossed his path.

Even before his contract with the department ran out, he won a grass-cutting contract for Umgeni Water and another for the fuel-pipeline parastatal Petronet.

Christian found that he had chanced upon a golden opportunity. Grass cutting and verge maintenance was relatively easy to get into and to achieve good results, but in order to win these contracts, you needed a pest-control license because of the herbicides involved. A difficult qualification to obtain, Christian was one of only five license holders in the Midlands, and the only black license holder. Today, the grass-cutting and verge maintenance industry is completely flooded with contractors, but in the early 2000s it was full of “low hanging fruit,” he says.

Christian demanded a high quality of work from his teams, no matter how small the job, and soon the number and size of his contracts increased. The break-through was Transnet, for which he did railway, siding and station clearing throughout South Africa.

True to his vow to exploit every opportunity he could find, he saved and invested every rand from his maintenance contracts, at first in property and in vehicles for a nascent transport business. Christian describes his tireless efforts to gain new business and explore opportunities from knocking on doors, leaving business cards everywhere and even, once a year for about three years, an extended business trip countrywide to all his acquaintances to actively look for investment opportunities.

Increasingly, he also grew interested in franchising and at first set his mind on opening a KFC in one of the few towns in Kwazulu-Natal that did not yet have an outlet. But four years of preparation came to nothing when the company instead offered the site to an existing franchisee.

Undeterred, Christian continued exploring, and set his sights on opening up a Skippers fish-and-chips franchise in Estcourt. He was able to buy it cash, and from the opening day in 2011, the outlet was profitable beyond expectation.

His next move was to replicate this franchise success with two further outlets, one in his hometown of Ladysmith. Having identified prime sites for his new outlets, Christian had to move quickly to secure the leases and the franchises. The banks, however, were not going to be quick enough to put up the R1 million finance that he needed, and so he approached Business Partners Limited (BUSINESS/PARTNERS).

“They were very quick,” he says of BUSINESS/PARTNERS, who gave him a five-year loan via the Business Partners Franchise Fund – which provides finance to entrepreneurs for purchasing their own franchises – to set up the two franchise outlets. Most recently, Christian has set up a King Pie franchise outlet in Durban without any outside funding, and as always, he is looking for new opportunities.

In his typical open-ended style, he cannot say exactly in which direction his business will grow, but what he does know is that he hasn’t achieved his goals for profitability nor job creation yet. He has a clear figure in his mind, and he is determined to achieve it.