Brave Matthew confronts armed home invaders to save his dad 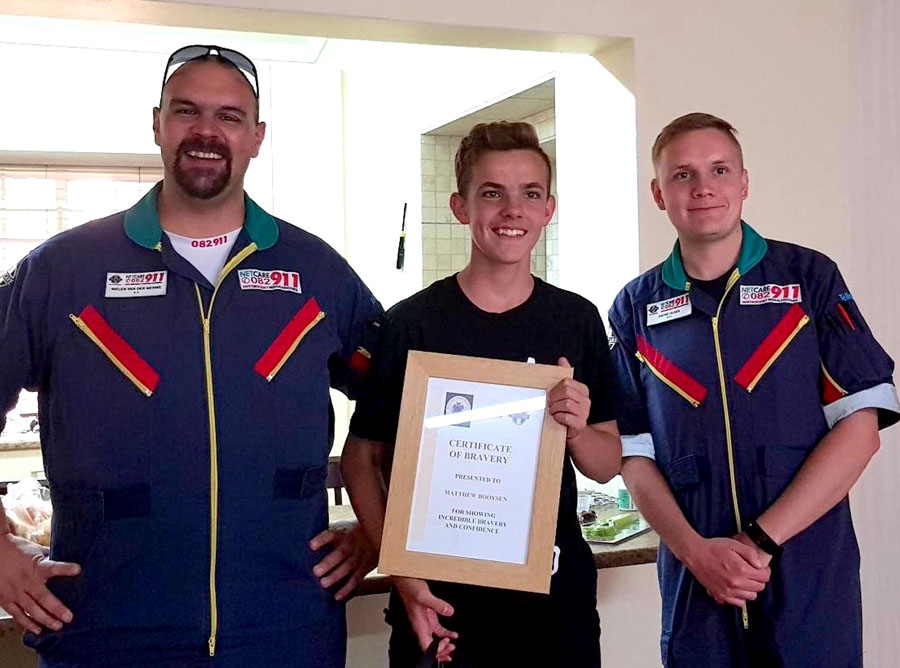 Monday, 3 December 2018, Brave 14-year-old Matthew Booysen — who rushed to the aid of his wounded father despite being threatened by armed home invaders — was recently honoured with a Netcare 911 Certificate of Bravery for his selfless and courageous actions on that traumatic day.

Netcare 911 paramedics, Nielen van der Merwe and Dayne Olsen, recently presented Matthew with the award at his home in Mulbarton, near Johannesburg. According to the two paramedics, “Netcare 911 wanted to honour a young man who showed incredible courage and presence of mind during an exceptionally traumatic ordeal for him and his family.”

Matthew’s proud mother, Samantha Booysen, said that she is most grateful that her son was acknowledged with the award, which she feels is well deserved. According to Mrs Booysen, despite witnessing his father getting shot several times and himself dodging a bullet, Matthew faced down the armed attackers, and went to the assistance of his father, Benny Booysen, who is now recovering well at home.

“Matthew’s bravery and calmness at the time were incredible and my husband and I are immensely proud of him. He had no idea he was going to receive the Netcare bravery certificate, and was so excited about it that he took it to school the next day to show his headmaster!”

Van der Merwe and Olsen — who had crewed the Netcare 911 intensive care ambulance that transferred Mr Booysen from the emergency department at Netcare Mulbarton Hospital, where he was stabilised, to Netcare Union Hospital in Alberton for further treatment — felt strongly that Matthew’s heroic actions should be acknowledged.

After hearing the story from Mrs Booysen en route during the ambulance transfer of her husband, the two paramedics decided to put forward Matthew for the Netcare 911 Certificate of Bravery. In addition, they wanted to present Matthew, who is a keen boy scout, with a first aid kit so that the teenager can assist people in future should he ever be required to do so.

On 3 October 2018, Matthew’s father Benny had tried to shut a sliding door to prevent armed intruders from gaining entry into their home. However, they responded by shooting him, first in the left shoulder and then the right shoulder. Matthew, meanwhile, ran for cover and — as is clear from a bullet hole that can still be seen in the wall of the Booysen’s home — the intruders shot at him as well but missed.

“Realising that his dad had been shot, Matthew returned to confront the men, pleading with them to stop shooting, and insisting upon helping his father. The men demanded to know where the valuables were, and proceeded to ransack the house. Matthew commenced treating his father, using towels to try to staunch the flow of blood from his wounds,” relates Van der Merwe.

The young hero thereafter assisted his dad to get to the family car to drive him to hospital but, not familiar with driving, he stalled the vehicle and crashed it into the garage. Matthew then helped his father to get to the complex’s main gate some 100m away, where he started shouting for help.

Security personnel came to their aid and rushed Mr Booysen to Netcare Mulbarton Hospital’s emergency department where he was stabilised. The Netcare 911 ICU ambulance team then safely transferred him to the trauma centre at Netcare Union Hospital for further treatment of the gunshot wounds.

“We were struck by the remarkable courage Matthew showed throughout this unfortunate ordeal, particularly if you consider his young age. I suspect that his scout training may have assisted him to stay calm,” reflects Van der Merwe.

“Matthew’s father was treated at Netcare Union Hospital’s emergency department — which is one of only two facilities in the country to be accredited by the South African Trauma Society of South Africa as a level 1 trauma centre — by surgeon, Dr Samuel Asi Gyebi and his team, who were standing by to treat Mr Booysen as soon as he arrived.

Dr Gyebi says that Mr Booysen was admitted in a critical condition having suffered four gunshot wounds to the chest and shoulders, a punctured lung and a shattered shoulder bone or scapula. These injuries were quickly assessed by means of scans, and Mr Booysen underwent emergency surgery.

“We had to undertake three separate procedures in order to remove the two bullets that were still lodged in Mr Booysen’s chest, treat his lung and damaged scapular, and debride his wounds. Thereafter the patient had to be operated on by one of the vascular surgeons at the hospital to repair a damaged artery.

“While Mr Booysen is not yet able to use his hands due to nerve damage caused by one of the bullets, which will require plastic and reconstructive surgery to repair, we are delighted that the team was able to successfully treat his injuries, particularly given his critical condition when he arrived at the hospital. Mr Booysen responded well to the treatment and was discharged home on 14 October,” observes Dr Gyebi.

Samantha Booysen says that the Netcare 911 paramedics and Netcare doctors and staff were highly professional and supportive throughout the family’s ordeal.

“Nielen van der Merwe stayed in regular touch to check how my husband was doing, and even visited him while he was at Netcare Union Hospital. He did not need to do that and we are grateful to him for having gone above and beyond the call of duty to assist and support us.

“We were delighted when Nielen told us that they wanted to present Matthew with the Netcare 911 Certificate of Bravery, which he is exceptionally proud of and has served to raise his spirits.

“We are immensely thankful not only to the Netcare 911 team, but also to Netcare Mulbarton Hospital’s emergency department, whose personnel showed such compassion when Benny was taken there, as well as for the first class treatment he received at Netcare Union Hospital. Our family is also indebted to a wonderful Netcare trauma counsellor, Thandiwe Khanyile, who provided us with considerable support over this trying time,” concludes Mrs Booysen.