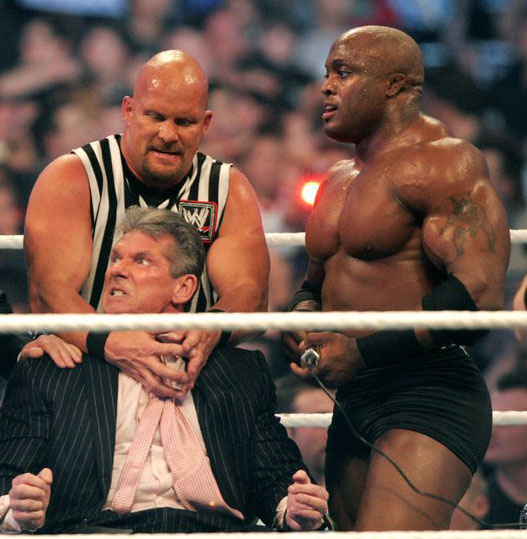 As is typical of Kayfabe Wrestling it may all be a façade. So while the ring has the heavy weights slugging it out with a few contenders trying to enter, some neutral referees, like the Mail and Guardian are keeping score (below).

But the man in charge of SA Kayfabe Wrestling Inc may have other plans.

Of the 1 138 ANC branches (out of a total of about 3 800 branches in good standing) that had held their branch general meetings (BGMs) by Thursday, 768 nominated Cyril Ramaphosa as ANC president Jacob Zuma’s successor and 360 nominated Nkosazana Dlamini-Zuma.

These numbers are almost certain to change in the next few weeks as the remainder of the BGMs are held.

KwaZulu-Natal is the ANC’s biggest province and will be sending 870 delegates out of the total of 4 723 to the conference, with most members there backing Dlamini-Zuma. Of the 324 of the province’s branches that sat for their BGMs, 247 nominated Dlamini-Zuma and 79 nominated Ramaphosa.

Mpumalanga is the ANC’s second-biggest province and will be represented by 736 delegates at the December conference. Twenty branches in two regions will be holding their BGMs this weekend and, according Ramaphosa’s backers, Dlamini-Zuma’s supporters are intent on collapsing the meetings, fearing the ANC deputy will make inroads in the province.

“A total of 32 branches have held their BGMs in the Ekangala region, with 30 nominating Ramaphosa and two backing Dlamini-Zuma.

The Eastern Cape has 299 branches cleared to attend the conference, and 195 have held their BGMs. Ramaphosa received a total of 182 nominations, Dlamini-Zuma 11 and Mkhize two.

The Western Cape will send 190 delegates to the December conference. A total of 88 branches have already met, with Ramaphosa receiving 78 nominations. Sisulu was nominated twice and Phosa also received two nominations, with six going to Dlamini-Zuma.

In Gauteng, 198 of the province’s 470 qualifying branches successfully held their BGMs, with 176 nominating Ramaphosa and 22 Dlamini-Zuma.

A total of 205 branches in Limpopo convened BGMs, of which 177 nominated Ramaphosa and 28 Dlamini-Zuma.

In the North West, of the 347 eligible branches in the province, fewer than 25% of the branches have held their BGMs. So far, 23 branches across the province have nominated Ramaphosa and 14 have backed Dlamini-Zuma.

The Free State has been plagued by outbreaks of violence at its branch meetings. Insiders claim that 165 BGMs had been held in the province; but, the exact figures on how regions were nominating were still unclear at the time of going to print. The province will send 409 candidates to the national conference.

In professional wrestling, kayfabe /ˈkeɪfeɪb/ is the portrayal of staged events within the industry as “real” or “true”, specifically the portrayal of competition, rivalries, and relationships between participants as being genuine and not of a staged or predetermined nature of any kind.