How Does One Explain South Africa?

Next week I have been asked to address 350 ‘senior’ women.

“We hope you have some good news!” is their mandate.

“Mmmm, not much really” is my first thought.

Trying to explain SA in a global context is tricky, so much of what is going down in SA is not good, and the world is not a very happy place either.

Alec Hogg reports from Davos “Topping everyone’s list right now is how the Fourth Industrial Revolution is skewing financial rewards. The super-rich have become even more so, an Oxfam report showing that the 62 wealthiest people (2010: 388) together own as much as the bottom 3.5bn of the world’s population combined.

“An interesting spinoff, though, is how this has impacted public trust.

When Prof. Edelman took the wraps off its annual Trust Barometer, the 16th, compiled from interviews with 33 000 people worldwide. Key finding was how trust in Governments has fallen to its lowest ever, and in Developing countries to a level Richard Edelman described as “catastrophic.”

He highlighted Brazil and South Africa as the two countries doing worst. Among Brazilian citizens, who are in the process of impeaching their President, only 21% trust their Government. The comparative for South Africa is a heart-breaking 16%, lowest of all countries surveyed. Worse, the interviews were conducted in October and November. Before Nenegate.”

I thought I’d use the diagram below to start the conversation with my ‘oldies’.

“Let’s understand the relationship between the social partners in a market based economy. To do this we need to unpack the interests of Government, the Private Sector and Civil Society”, is the way I might start the conversation – depending on the looks I get.

Some discussion would follow on the role of the ‘social partners’ in promoting an environment in which all of South Africa’s people and institutions can prosper.

“TRUST” would quickly emerge as the key world.

What has happened to ‘trust’ in SA, why are we ranked last in this year’s Annual Trust Barometer.

Why do only 16% of South Africans trust their government?

In approx. 2005 trust between the social partners was much better than it is now. In the WEF’s Global Competitiveness Report SA ranked 23rd on the measure of “public trust of politicians”. In a relatively short period of time we have dropped to below 100 out of the 140 countries surveyed.

So what is trust?

“The conviction that the other party’s intent toward you (or your party) is sincere and benevolent”. 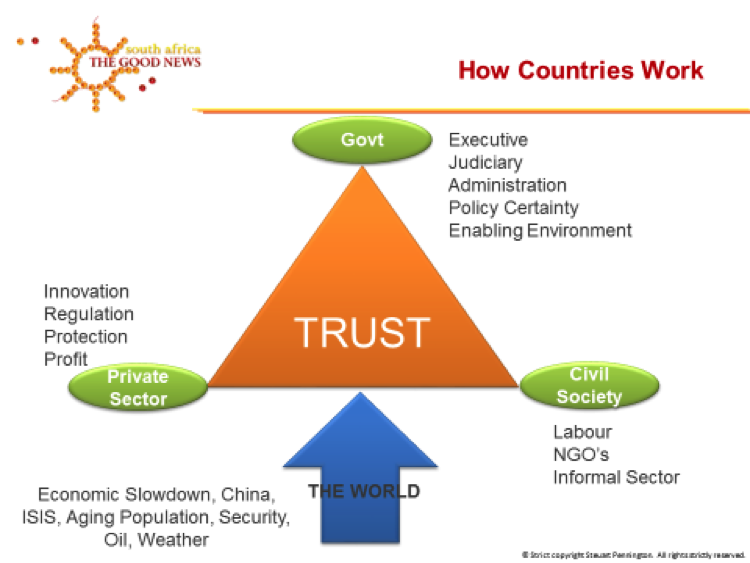 If we pause here to consider the role of the private sector and civil society in SA we have a very different story to tell.

In respect of Civil Society we have some 100,000 NGO’s that are doing magnificent work to help SA get back onto its feet. In terms of ‘giving’ research indicates that 93% of South Africans ‘give’.

And while our Informal Sector is difficult to understand, the UCT-Unilever Institute tells us that of the 8 million officially unemployed citizens 6.5 million are economically engaged in the informal sector which admittedly, is below the tax radar, but which is estimated at R500 billion per annum and growing at upwards of 3%.

Labour, in my view, is not on the same page. Our strike record last year was amongst the worst in many years. NEDLAC (National Economic Development and Labour Council – a body comprising representatives from the ‘social partners’) seems unable to forge a vision for a prosperous South Africa. Mistrust appears to be ubiquitous as the parties circle each other like perpetual foes.

And what of government? Is it good and efficient? Is it focussed on creating an enabling environment in which the private sector and civil society can flourish?

Only 16% of our citizens think so.

Of the 36 departments in government which are performing well and which poorly?

Why is mistrust of Government at an all-time low?

Why is Team South Africa, highly regarded by Davos delegates in the past, now a disappointment?

Why, 21 years into our democracy are our divisions still so deep, so bedevilling?

The strange thing is that we have the players. We have world-class corporates, a vibrant private sector, and a reputation that is up there with the best. We have a highly committed civil society that is doing quite unbelievable work to rectify the wrongs and injustices of the past. We have many government officials who are determined to deliver and genuinely believe in a ‘better life for all’.

But the lack of trust prevents us from going onto the field together, putting our arms round each other, huddling, high-fiving and FOCUSSING on what we need to do to becoming a winning nation.

When we insult each other we argue freedom of speech.

When we drop the ball we blame the past.

When we cheat we hide behind our Captain.

When we don’t pitch we don’t fear being dropped.

When we don’t educate and train our new team members we blame everyone but ourselves.

And finally, as we squabble amongst each other, not noticing the game our opposition is playing, we argue about what sport we are playing and why we are not winning?

We need to find a way of improving Institutional trust, trust between the social partners.

This can’t be a talk shop, we have to come away with a declaration of what our agreed roles are, how we will work together, how we will manage conflict, how we will partner on policy formulation, and how we will fight unemployment, inequality, poverty, corruption and service delivery incompetence.

We have to find a way of working to a single agenda, that of economic growth and prosperity for all in SA. Going back to the National Development Plan might be a good place to start.

Beefing up the stature of the representatives of the social partners who sit on NEDLAC might be a step in the right direction.

The simple truth is, at an institutional and individual level, you can’t build trust on the basis of mistrust.

My sense is that we are failing dramatically at enabling institutional trust.

Meanwhile, back on the ranch, we are getting much better at building individual trust.

If the Trust Barometer findings are accurate we trust each other more than we trust our government.

Surely we can fix that.