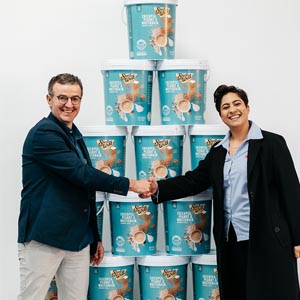 In honour of World Food Day on Saturday 16 October, Koogan Plastics in conjunction with partners, Freightplast and Safripol has donated over 10 000 buckets to Inani StartWell Foundation. Inani launched a not-for profit breakfast cereal processing plant that will serve 200,000 meals daily.

A The first of its kind cereal processing plant aims to contribute towards ending chronic malnutrition or silent hunger which causes child stunting. According to UNICEF more than 27% if South Africa’s children under 5-years old are considered stunted.

Stunting is the impaired physical growth and delayed cognitive development that occurs when children fail to reach their height-for-age growth, predominantly due to a poor nutritional diet during the first 2000 days of their life.

The buckets are a “game changer” to transporting and serving daily nutritious meals to kids at early childhood development centres in hard-to-reach areas, according to Org van der Wath, Executive Director of Inani StartWell Foundation.

The StartWellTM nutrient-dense cereal will deliver around 85% of a toddler’s daily protein needs. The meal also carries the precise vitamin and minerals required to support child growth.

Government and many private feeding schemes provide energy-rich but nutrient-poor food to about nine million children daily. These efforts are more focussed towards feed hungry children in poor communities. To address stunted growth, a country also need to ensure that the impoverished growing children are nourished.

Van de Wath concludes, “These partnerships are imperative because we face a social and humanitarian disaster if we don’t act now. A total of 34.4 % of the country’s work force is unemployed, food insecurity impacts 11.8 million South Africans daily and 300 000 more SA children become stunted every year.”