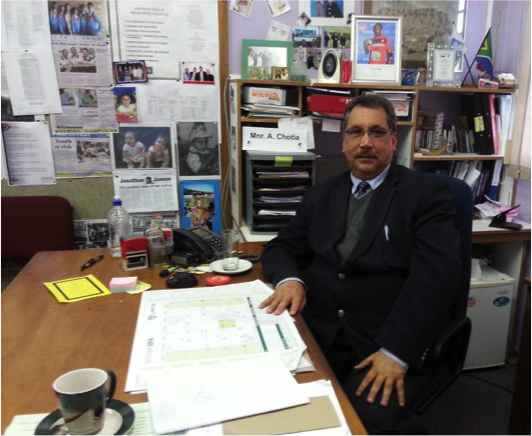 They are rewarding acts of service, not acts of crime. They are breeding a culture of pride, not violence. They are instilling a sense of dignity, not hopelessness. This is how the educators and learners of Glendale Secondary School are fighting back against the culture of gangsterism in their community of Rocklands, Mitchell’s Plain.

If you ask a learner at Glendale Secondary School where he lives, you probably won’t get the answer you expect. Instead of replying with the name of a suburb, you’re more likely to find out which gang rules his or her neighbourhood. When learners witness some wrongdoing, none of them will ever admit to having seen anything, for fear of being labelled a whistleblower and putting their lives in danger.

“This is how gangsterism has changed the complete atmosphere; the culture of a people. As a school, we needed to change that. Through the support of Columba, we were looking into developing the leadership, the mindset, and those learners who at first were so scared because the gangster culture had taken over,” says Glendale Principal Mr Achmat Chotia.

Gangsterism, crime, and unemployment are daily realities for these learners. Mr Chotia believes that there should be much more to education than simply teaching from a text book. Instilling values in the learners should be part of the school’s responsibility, particularly when learners have not had the privilege of an easy home life. “Academically our children have the same potential as all those top schools…but how do we reawaken that? How do we channel that through a value system, through encouraging them, through motivating them, through empowering them with the necessary skills and assertiveness, confidence? How do we do that?”

The answer, Mr Chotia discovered, was to activate youth potential and encourage learner-driven leadership by partnering with Columba Leadership. 24 learners and six educators at Glendale have benefited from Columba Academies so far.

The Groundbreakers decided to paint the toilets, which had become a particularly unsafe and unsanitary place at school. Glendale has security volunteers from the community to monitor the area but even they had become scared of the gangsters inside and outside the school. This risk has since decreased dramatically thanks to the powerful efforts of the prefects and RCLs (representative council of learners), many of whom are Columba graduates.

“Only afterwards, we realised the impact that the toilets have on our learners because it creates a sense of pride, and they claim ownership of the school and they go out and boast about it,” says Deputy Principal, Ms Kathy Davids.

Uniform rules at Glendale had previously been very lenient, however, a decision was made to introduce new uniform regulations whereby learners are no longer allowed to wear tracksuits. A red-and-white trimmed blazer is a new addition to the school uniform and is being phased in slowly as it comes with an additional cost. “But every learner I think now wants to wear a blazer. I think we’ve at least achieved that because putting on that blazer gives you a kind of confidence,” says Mr Chotia.

The school management team then took this notion of pride further, giving high-achieving learners something more to boast about. Every gang member has a ‘chappie’, a mark which shows their particular gang affiliation. To change this around, Mr Chotia and his team decided they would implement their own system of ‘chappies’ by awarding badges to learners based on academic results, sporting achievements, school involvement and acts of service.

The school assembly is also being used as a platform for youth engagement and learners are encouraged to address the issues that are affecting the school and community by offering their own innovative solutions.

Mr Chotia also notes that the drop-out rate decreased significantly since the Columba intervention, in 2011 more than 250 learners left the school this has reduced to below 60 last year.

“Columba brought unique opportunity to this school,” says Ms Davids. In fact, all the value champion educators at Glendale credit the Columba Academy for rekindling their passion for leading and making a difference inside and outside their classrooms. The number of learners benefiting from the school feeding scheme has quadrupled from 50 to 200 since Mr Selwyn Barnes and Mr Abie Delport, both value champion educators, got involved after the Academy.

The Columba graduates too have managed to infiltrate every leadership and service project in the school, oftentimes leading the initiatives. These include peer counselling, community service, debating, quiz teams and recycling campaigns. “We’ve been flourishing ever since the Academy,” comments Jayson George, 2014 Head Boy and Columba Graduate, who had been shy and reserved prior to the Academy. Jason matriculated with 8 distinctions and is now stuying law at UCT.

Overall, the Matric results have improved year-on-year since the first Columba Academy and 2013 saw Glendale achieve their best bachelor’s passes to date!

Mr Chotia is very proud of the achievements at Glendale in the last few years and feels inspired to do more in the years to come. The school has plans to build a running track, install a swimming pool and a

club house, giving the learners of Glendale even more to boast about (this in spite of the fact that only 12% of learners have been able to pay the R1 100 annual school fees this year).

Mr Chotia concludes: “Although we’re very proud of our toilets because that is something tangible you can see, I believe the change here was more the atmosphere, the mindset, the value system, the fact that we’ve empowered our learners, our children, now to take charge, almost as a counter to gangsterism. And to me that is education!”

Our mission is to activate youth potential through values-based leadership programs for the double benefit of maximising their prospects of academic and professional success and improving the schools they attend.

We transform disadvantaged youth from passive resignation to active agents of change and role models for personal progression.

Our ethos is simple, young people already have inner greatness; our task is to elicit this greatness and activate latent leadership potential.

The Columba programme is a three-stage intervention over 2 years with 5 broad objectives: