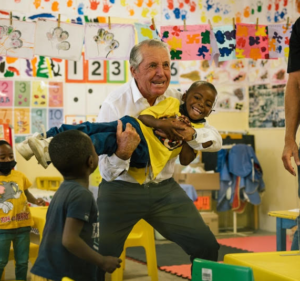 South African golf legend, Gary Player, spent the morning walking Jean de Villiers, Citadel’s Head of Philanthropy, around the grounds of the school he and his late wife, Vivienne Player, established over 30 years ago. Since 1990, the Blair Atholl Pre-Primary School has provided impoverished children in the community with a sound educational foundation phase.

Player, alongside singer Ronan Keating, recently helped raise R2-million rand at the 2022 Citadel charity auction. All of the proceeds will be managed and distributed by the Citadel Philanthropy Foundation to ensure both beneficiaries can maximise the impact of each rand received.

Learners and teachers were delighted to meet both Player and De Villiers, who spoke with Principal Belinda Warmback about the latest developments at the school and even helped to plant some trees.

The money assists 125 learners with the educational resources they require as well as two healthy meals per day. The classes are kept small at just 25 children per class.

Player (86) says we all have a debt to society and it’s important to continue the legacy he and his wife created. “I told myself one day when I’m successful – not if but when – I will contribute to society, and that is the great joy that I continue to have. What greater joy, than changing lives,” says Player.

Jean De Villiers, who has been Citadel’s Head of Philanthropy since 2016, says sustainable philanthropy that makes an impactful difference will change the future of South Africa. “I believe that if you call South Africa home – and when you are in a position to give – you have the responsibility to do so. Collectively, we can make South Africa a better place. It’s not just a job for government, it is a job for all citizens of South Africa,” says De Villiers.

The Citadel charity auction has raised a remarkable R5 -million since 2018.