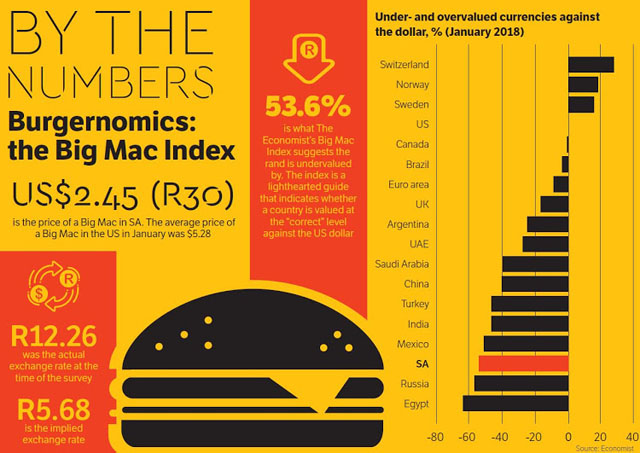 The Big Mac Index is published by The Economist as an informal way of measuring the purchasing power parity (PPP) between two currencies and provides a test of the extent to which market exchange rates result in goods costing the same in different countries.

The Big Mac Index compares the prices of hamburgers and what that says about the value of the local currency, and therefore what it’s implied value is for the SA Rand based on purchasing power parity (PPP). According to this well-known index the Rand is grossly undervalued and this has been the case for as long as data has been available for the Big Mac Index.

Therefore, based on purchasing power parity (PPP), the South African rand is undervalued by some 56%

If you are a South African travelling abroad you’ll eat your Big Mac slowly @ approximately R10 a bite.

If you are a US citizen visiting South Africa you might buy two just in case the first doesn’t suppress your appetite.

Much of the strength of the rand is based on political sentiment and both local and international investment confidence. It is a measure of how well the country is being led.

Mr.Ramaphosa we are watching this space.