Example: 78.5% of respondents say they “experienced no racism in their life” is just one of the stats reported (I’ll come back to the full report later).

Gareth van Onselen in Business Day (7th March) comments, “such surveys constitute hard evidence in a debate that operates, for the most part, without any…. and they force you to think about how and why people say what they do.”

Can the same be said for? 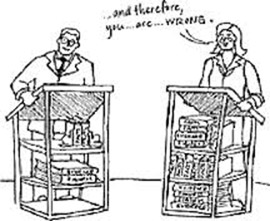 We often hear that 50% of South Africans live in “poverty” (SA amongst the worst in the world), yet we don’t take the time to define accurately what kind of poverty we are talking about – extreme poverty, moderate poverty, or relative poverty.

If extreme poverty is defined as ‘a short and wretched life where people have little or no access to shelter, education, clothing, fresh water, adequate nutrition for physical or mental health, and basic healthcare’ would a survey substantiate that 50% of South Africans live there?

Certainly not in a country where 88% of households own a colour TV and a cell phone, 11.5 million children receive social grants, education is free, 92% have access to fresh water, 85% have access to electricity an 86% live in a house.

Again we hear constantly that 8.5 million South Africans are without work and that this constitutes 25% of the economically active population (SA amongst the worst in the world). Not enough is said of the facts that this stat applies to the formal sector where employers submit a myriad of annual returns upon which this stat is determined.

What of the UCT Unilever research into the informal sector? Where the 8 million unemployed live, which tells that ‘1 in 10’ township houses is ‘home’ to entrepreneurial activity, that 6.2 million people are ‘informally’ economically engaged, and that the informal sector contributes approx. R500 billion to our GDP…and this all below the tax radar?

Will a survey, inclusive of this research, give us the real figure of those South Africans who ‘have no work’?

We hear constantly that our Gini co-efficient is ‘the worst in the world’, that South Africa is the world’s most unequal society. In the Gini calculation is the following factored in?

Will a survey, factoring in the above, tell us a different ‘inequality’ story?

Stats SA, (when I last looked) tell us that there are +/- 5500 road deaths per annum. The Road Traffic Management Corporation (RTMC) tells us 14 000. NIMSS (National Injury Mortality Surveillance Systems) tell us 20 000.

Over the period Dec 1 to Jan 11 this year 1700 people were killed, one of the worst numbers in our history. If this number is multiplied by 8 (a month and a half’s worth) the total is ‘projected’ at 13600 for 2016. But surely we are not killing people on our roads throughout the year at the same rate as we do over Xmas?

Will a proper survey tell us the truth?

Not only do we lack proper surveys, but it is my contention that the agenda of ‘some’ is to provide research which has the explicit aim of proving that SA is amongst ‘the worst in the world’ in many areas of endeavour, and that this is because the government is not doing its job, and this because the civil service is incompetent, and this is because everyone is corrupt – you get my drift?

Their agenda: Naming, blaming and shaming.

Then there are ‘others’ who use similar research, but with a completely different agenda and a much more subtle purpose. It suits these commentators to go along with these purported empirical findings, like:

Their agenda: Stay with the bad news, it sells. (I’m not denying our challenges).

In his book “The World until Yesterday” Jarred Diamond makes the point “Our perceptions of dangers, and our reactions to them, are systematically irrational in several ways. When we understand the facts, we may be prepared to modify our lifestyles”.

In SA, until yesterday, we thought ‘race’ was the number one ‘danger’ in the way of the development of our country.

Now we find out it is not.

Of the respondents, 78.3% are black, 9% coloured, 2.8% Indian and 9.9% white. Its findings cut a stark contrast to our more virtual reality. Only 4% of all those polled feel racism is a seriously unresolved issue. It comes in behind eight other, more pressing concerns. There are the usual suspects, but even the state of South African roads is deemed more important than racism.

A full 76.2% of respondents feel South African race relations have improved (54%) or stayed the same (22.2%). Significantly, 78.5% of respondents say they “experienced no racism in their life” when asked if they have noticed any on a day-to-day basis.

The breakdown by race shows that black respondents (79.4%) claim to notice or experience less racism than white counterparts (75.3%).

In turn, there are strong, non-racial preferences on other key issues, such as affirmative action — 87.1% of respondents agreed with the sentiment that “the best person should be given the job, regardless of race”.

Now, these questions and answers are not definitive.

Any improvement in race relations is a relative measure, and 78.5% of people not experiencing racism means 22.5% of South Africans experience some form of racial prejudice, which is telling. Nor do they delve into the issue in any depth.

They do not represent a non-racial utopia. But they do constitute hard evidence in a debate that operates, for the most part, without any. And together, they certainly suggest a different reality to what one might experience on Twitter.

It is an indictment that there are so few of these surveys. If this was the US there would be new polls daily interrogating the many and various issues to define South African society. But they are expensive, which is a big obstacle.

It is equally true that we remain enamoured with discourse in theory and identity politics. With these, subjective experience has become a substitute for other evidence — such as polls — that might offer a different picture.

There is a place for personal experience. It is, in and of itself, a perfectly legitimate contribution to public debate. But such experience has to be weighed against others’ experience before its significance with regard to grander trends, attitudes and behaviours can be fully gauged.

In this way, so much the “analysis” offered by those who slavishly promote identity politics is fraudulent. Not so much my experience of the world, as the world of my experience.

Racism and racial identity, whether in politics, government or the virtual universe, serve a great many interests that often run contrary to people’s real-world experience. It is politically and financially profitable for some to keep the idea of a racial crisis bubbling along.

Surveys such as the SAIRR’s are invaluable. One can always critique the methodology of the research, and opinions will differ over how to interpret the findings, but they force you to look at real responses on a macro scale and, in turn, to think about how and why people say what they do. They are an opportunity to explore and understand, and contrast the order of the day, which seems to be nothing more than predetermining that experience on behalf of everyone else.