Sappi helps to restore and rebuild with Mandela Month initiatives 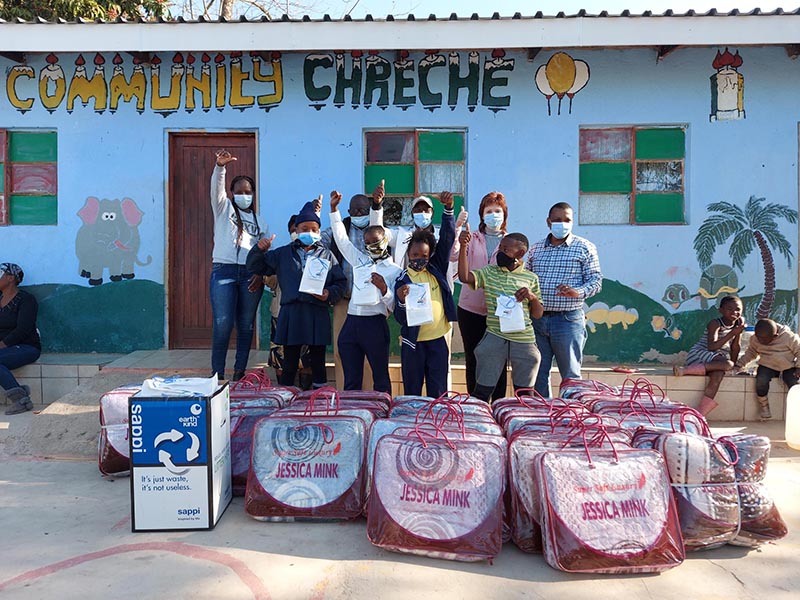 Where Sappi Southern Africa normally rallies to the call to #ServeLikeMadiba every year by encouraging our staff to give generously of their time in the week around former President Nelson Mandela’s birthday, a number of factors made it difficult to do so this year.  Combined with strict Lockdown Alert Level 4 regulations, the country also experienced extreme unrest, especially in KwaZulu-Natal (KZN) and Gauteng.

As a result, our initiatives were delayed, many of them only taking place in the first week of August. Undeterred though, our employees soldiered on collecting and donating generously in a spirit of giving, with the company matching these contributions.

Most fittingly, one of our biggest beneficiaries this year, was the Nelson Mandela Children’s Hospital (NMCH) –the first dedicated children’s hospital in Gauteng in operation since 2017 – who received a donation of branded blankets, Typek A4 paper, and hand sanitiser. They responded by saying: “Thank you Sappi for #servinglikemadiba by donating 2 years’ worth of paper! Together with sanitiser, blankets and water for the children at our Nelson Mandela Children’s Hospital”.

Staying in Gauteng, our head office staff partnered with the Helen Joseph Hospital –  a teaching hospital,  affiliated with the University of Witwatersrand’s Medical School established in 1967 – who received a much-needed specialised fridge for storing COVID-19 vaccines and other medication at the optimum temperature.  They commented: “the shortening of time saved in rushing to and from other areas to fetch medication will help all patients facing an emergency and will keep our medication requiring refrigeration safe and effective”.

In KwaZulu-Natal, our Sappi Forests personnel heeded the call of the very young, when they donated 90 packs of baby nappies to the Salvation Army’s Joseph Baynes Children’s Home in Pietermaritzburg. The staff who received these were delighted and commented: “Christmas came early for us this year! When you have 30 children aged under two you use a lot of nappies every day. Your generous donation was just so amazing and will go a long way to keep our little ones dry and comfortable. We thank you for blessing us with this kind donation. In the uncertain times we live, people like you make our jobs just so much easier.”

Elsewhere in KZN several of our neighbouring forestry communities in the KZN Midlands, were supplied essential nutritional porridge packs. Firstly, Sappi Forests joined forces with Savithi Trading Company, one of its contractor partners, and 1,500kg of porridge was distributed.  A further 3,000kg of the porridge has been procured by Sappi to be distributed by our teams of foresters and community relations personnel, who will work closely with the Department of Social Development to identify and  distribute the porridge to the child-headed households in our operational areas near KwaMbonambi, inland near Ixopo and Bulwer) and in the vicinity of Greytown and surrounds.

In the communities of Umkomaas, Mandeni and Stanger, surrounding our three mills in KZN, our employees contributed towards securing foodstuff to be distributed in food parcels via local NGOs to people who had been affected with food shortage, exacerbated by recent disruption of supply chains.

In Mandeni, House of Hope, Ikhwezi Welfare and Mandeni Welfare received food parcels to feed 60 families for a month.  In addition, the skilled handymen at our Tugela Mill will repair the roof of the House of Hope, later this month. In Umkomaas, the Place of Safety, Faith & Hope, Khanya Hospice, the South Coast Community Care Centre and Ukhamba Drop-off Centre will receive donations of at least a hundred food parcels, while seven ECD centres will receive sanitiser, masks and soap. Similarly, our Stanger team will work with the KwaDukuza Child Welfare, Inqolobane Children’s Home, Gledhow  Cultural and Heritage Association, Nkukhwini Feeding Scheme and Dolphin Coast Hospice in distributing much-needed food parcels

At our Mpumalanga operations, Sappi teamed up with members of the Ngodwana Integrated Community Forum and arranged an Early Childhood Development Outreach programme, donating blankets and goodie bags to the children of Empilweni Day Care and Woodhouse Day Care centres.  In Barberton, the children at the St John’s Care Centre each received a care parcel containing toiletries and a soft toy, whilst the Centre received Typek office paper, along with the nine Penreach Early Childhood Centres that Sappi supports in the Emjindini Township.

Commenting on the initiatives by employees, supported by the company, Sappi Southern Africa Communications General Manager Mpho Lethoko said: “We have long encouraged our employees to take action and serve their communities and to inspire change. We are always immensely proud of the way in which they stand together and embody the spirit of Madiba; and that they have done so again despite the challenges there were this year”.