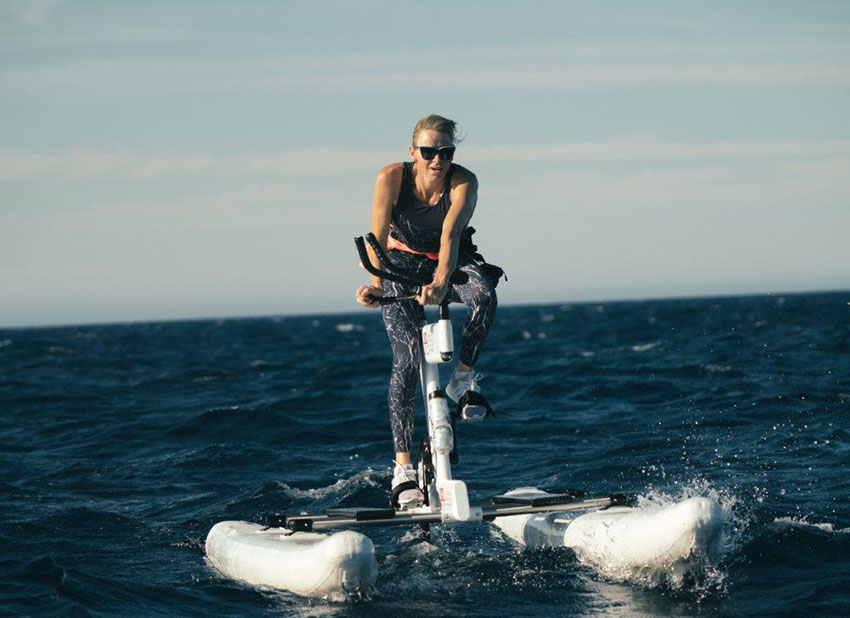 [Johannesburg; SA] Can you imagine cycling 180 kilometres? What about doing that distance on a water bike on the ocean over 24 hours? That is precisely what Her Serene Highness (HSH) Princess Charlene of Monaco is training for every single night and day!

“Navigating the ocean at night is no easy task. One feels so small and insignificant when facing this watery giant,” says HSH. The Princess is counting on the whole of South Africa to get behind her and support The Crossing: Calvi – Monaco Water Bike Challenge which will take place on 12 and 13 September 2020.

The aim of this Princess Charlene of Monaco Foundation’s sporting challenge is to travel from Calvi to Monaco in the shortest possible time by water bike, raising awareness of, and funds for the various programmes run by the Foundation.

The Princess continues to prepare for the Water Bike Challenge while holidaying with her family, including her children, in Calvi for the summer. The Princess trains daily in the vast, open ocean. The dedication shown by the Princess in training for the Water Bike Challenge is definitely a trait of a true Olympian. As is promoting water safety and ocean hygiene, which is HSH’s passion, and there is no length too far for her to go to do so.

“Her husband, His Serene Highness Prince Albert II, has been hugely supportive of the Princess’s efforts and often watches her train. As an Olympian himself, Prince Albert II knows what goes into this type of training. We were even fortunate enough to receive a video clip of His Serene Highness watching Princess Charlene train during their summer holiday in Calvi,” adds Chantell Wittstock.

The Challenge works as follows. From Calvi’s port, two teams of four internationally renowned athletes will take turns at sea for nearly 24 hours over 180 kilometres! The arrival is scheduled for 13 September at the Yacht Club de Monaco. And HSH Princess Charlene has been working diligently to train for the Challenge while promoting water safety and ocean hygiene.

HSH Princess Charlene says, “For a long time, water was my life. Discovering the joy of swimming inspired me to dedicate 20 years of my life to training and realising my dream to become an Olympic swimmer. Training and competing in the water taught me the importance of discipline, respect for oneself and others, team spirit, and dedication. Most significantly, I saw how learning to swim could not only change lives, as it did mine but also save lives.”

HSH added, “I’m also all too aware of the risks associated with water. Learning to respect the water and learning how to swim and stay safe in it can reduce these risks and give us great confidence and freedom.”

The two teams competing in the Water Bike Challenge are HSH’s team, Serenity, and team Notorious, led by Gareth Wittstock, General Secretary of the Princess Charlene of Monaco Foundation. It promises to be an amazing event.

The Water Bike Challenge follows on the hugely successful #strongtogether initiative that the Princess’s Foundation recently ran in South Africa. The initiative, aimed at raising awareness and alleviating the suffering related to the COVID-19 pandemic, reached 92 million people, and impacted 45 charities! It is one of many initiatives the Foundation runs, and “there are many more fantastic and impactful initiatives to come,” says Chantell Wittstock.

Recently, PCMFSA invited Clare Wiese-Wentzel to join the Foundation’s Board of Directors. Wiese-Wentzel is a writer turned attorney turned international business owner, and she does it all in excellence. “We are thrilled to have Clare on board. Her extensive experience and success in her various ventures will be a tremendous help to the Foundation. She believes in the Foundation, its principles, and its future. She is ready for the new horizons we envisage conquering,” says Chantell Wittstock.

And there are still many horizons to conquer! HSH has always been passionate about helping others, especially in her home country. Her Foundation not only focuses on raising awareness about the crucial issue of water safety, teaching people to swim and ocean hygiene, but also uses the transformative power of the positive values of sport by giving children access to a variety of sporting disciplines. Its Sport and Education initiatives include providing financial support to talented athletes who lack the funds to realise their dreams.

HSH is leading the charge with the Water Bike Challenge and asks South Africa to stand behind her and the Princess Charlene of Monaco Foundation to continue making a difference.

“HSH truly has the most generous and sincere heart. Her mission in life is to save lives, make a difference, and give back,” adds Chantell Wittstock. “She is so passionate about both Monaco and South Africa, the work she has done and continues to do is inspiring. She truly believes in her own words: ‘Together we will save lives. One person, one family, and one community at a time’,” concludes Chantell Wittstock.