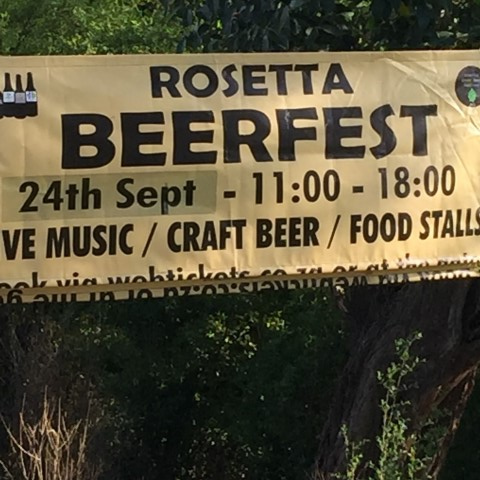 In the Natal Midlands where I live Heritage Day was celebrated with the organisation of a Beerfest in Rosetta. This is a farming community and a wealthy one at that. The nearest ‘township’ is in Mooi River named Bruntville. Needless to say there are a few shack settlements dotted around, notably in Rosetta itself and in neighbouring Nottingham Road where the inmates live in squalid conditions serving local, mostly Asian owned, shops and dealerships. Many of the farmers have gone to considerable trouble to accommodate their labour with titlehold in nearby Lidgetton. The Midlands is well known for its Spa’s, marriage venues, good private schools, exclusive golf estates, specialised home industries and ubiquitous craft beers.

We’ve had our share of farm violence over the years and sadly the interracial narrative still, for many, harks back to the old days – ’my boys’ being the least offensive.

So I thought I’d pop along, check out the scene, and see for myself if racism is still alive and well in the Natal Midlands. We are of course constantly reminded that the legacy of racism, colonialism and slavery is alive and well across the country – mostly by politicians who play the racism card while trying to explain away incompetence and corruption; by journalists who use it to explain any form of disagreement, particularly when it comes to the ‘legacy’ of unemployment, inequality and poverty; and more recently by students who think that it is university leadership that is fault in the #feesmustfall campaign.

I don’t really enjoy the idea of consuming vast quantities of beer in the middle of the day, but as Heritage Day has taken the form, across large parts of the country, as a Braai day I thought I might – for a change – and the fact is that 23% of adults in South Africa (8.9 million adults) have a braai on a weekly or monthly basis. Incidentally braaing is most popular in the Western Cape and Gauteng, where 34% and 31% of adults respectively braai weekly or monthly. (AMPS2015B)

There are of course those who argue that ‘braaing’ is not part of our heritage and should not be the way we celebrate Heritage DayHeritage Day, but 8.9 million adults can’t be wrong (Just like 2.6 million Scots who drink their Whisky with lemonade can’t be wrong!)

The first thing I noticed was that the Harley Gang were present, tattoos everywhere. Big white okes with sawn off lummies kind of makes you think – crass generalisation I admit – that there won’t be many black folk at the same venue. So I asked my daughters to pose!

But when I arrived at playground it was good to see mothers and children from the Rainbow nation playing and chatting.

The band was Undivided Roots, a mostly reggae band comprising members of one family from Pietermaritzburg. The lead guitarist is 10 years old, with the eldest brother Wadada (27) being in charge. They live in Edenvale outside PMB and are all home schooled in addition to playing great music. There was quite a lot of dancing, whistling, vibing amongst ‘the people’ all together. What a jawl!

Judging by the various forms of dress on display there were people in attendance from all walks of life.

I happened to bump into an English tourist, the first thing he said to me was, “is it always like this in SA? You’d never think, reading our newspapers, that this kind of ‘mixing’ ever happens in your country, I’m blown away.”

We’re often reminded of our ‘racism’; our journalists constantly tell us that it remains our biggest national challenge; a great friend comments that we whites are, and will remain, ‘recovering racists’ rather like those who suffer from substance addiction – never ‘cured’ always ‘in recovery’.

But for me a day like this reminds me of my individual humanity, of our collective humanity:

Just our people having a good time, celebrating our Heritage, knowing how far we have come – but being reminded, as we see the shack settlement across the road, – how far we, as a collective with a growing unitive consciousness, still have to go.