HERITAGE DAY: A FUN GAME to ‘OWN IT’.

As Heritage Day is coming up on the 24th, South Africa’s own version of the popular Monopoly board game – Monopoly Mzansi wanted to share some fun facts about the special places that make South Africa so great (see attached). Did you know the shoes on the statue of Nelson Mandela in Nelson Mandela Square, Sandton are almost 1m in length or that Vilakazi Street (another location featured on the board) is the only street in the world that has housed two nobel laureates.

Pass it on: what better way to celebrate Heritage Day than by owning South Africa’s most iconic board game Monopoly Mzansi, featuring 22 proudly South African locations. In celebration of this month, ToyZone is offering a R100 discount on Monopoly Mzansi valid until the 30 September 2017 – own your own piece of South Africa.

Have a happy Heritage Day! 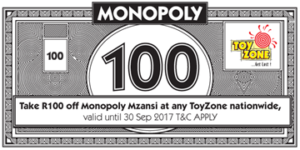