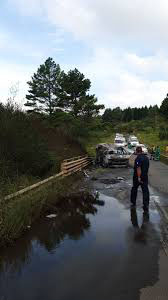 Media24 reported on Tuesday 18 February “Two people were killed, and 17 others injured when the minibus taxi they were travelling in overturned and burst into flames on the R103 near Rosetta, in the KwaZulu-Natal Midlands, on Monday afternoon.”

Most of the children lost their uniforms and their stationery and school bags, as they desperately attempted to pull their colleagues from the burning wreck. Many were burnt and all were traumatised. Sadly, the driver and one of the children perished.

The emergency services were quickly on hand and the children were transferred to Northdale hospital for burn wound treatment, two very serious cases were taken to Grey’s Hospital and Escourt Clinic. 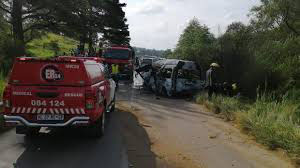 On Wednesday the community swung into action. By Friday afternoon enough money had been raised with donations from Michaelhouse Community Partnership (MCPT) and Clifton School; new uniforms bought from provider Pick Stores at a decent discount; home visits arranged through St. Raphael’s for both wound dressing and counselling; transport subsidised for the children to attend the funeral in Muden; Nottingham Road SPAR replaced the stationary, by putting out an appeals trolley, to which the wider community contributed and by making up the shortfall themselves. The DoE saw to the memorial service at the school, the funeral arrangements and the replacement of text books.

The children involved in the accident were from Asithuthuke Combined School in Zenzane Village near Balgowan. Asithuthuke is one of eight schools in the Midlands 1 programme that are involved with Partners for Possibility (PfP), an NGO which partners business leaders with Principals to improve the functionality of schools as places of learning. PfP is involved with over 1200 schools in every province country wide.

Functionality focusses on three components; school infrastructure, teacher instruction and school management. South Africa has 30 000 schools; 7000 secondary and 23 000 primary. The Joint Education Trust research indicates that 5% are world class, 15% functional as places of learning, and 80% dysfunctional. Dysfunctionality does not necessarily indicate failing, but rather being under-resourced or marginalized. PfP partners commit to a year’s service to change this. Steuart was assigned to Asithuthuke to work with Acting- Principal Silas Munyoro. Karen McKenzie (karen@symphonia.net) is looking to launch Midlands 2 this year, please contact her if you are interested.