There are many reports that show the challenges facing rural and township youth attending school in these areas which include lack of infrastructure, lack of trained teachers, no facilities such as libraries or computer labs, amongst many well documented challenges. What is often missing in such reports is the resilience and hunger that many of these youth have to get an education (which still remains one of the gateways to class mobility in South Africa).

This has been one of the core central focuses of Sakha Ingomnso Lethu’s flagship programme “Sakha Ulutsha Lwethu” (we are building our youth), to provide information and tools for rural and township youth to be able to access institutions of higher learning. This year in June/July Sakha Ulutsha Lwethu partnered with Duke University and the Organisation for Tropical Studies, South Africa office (OTS) to run workshops for rural youth in HaMakuya, Venda in Limpopo.

The workshops were focused on exposing the learners the learners in HaMakuya to various study options for post-high school career options. The University of Cape Town, Wits University and the University of the Free State provided application forms, prospectuses and various other informational packages to help the students make the best choice proper fit career option. In the formal presentation to the students, we focused on various funding options, as many of the students come from low income families, and an area with a very high unemployment rate and thus many households are dependent on the government grant and ‘piecemeal’ jobs.

OTS has been working in the HaMakuya area for a number of years now on various programmes such as the Global Health course (run with Duke University), and as part of the programme a number of American (mostly) undergraduate students visit the area for about 10 days, three of which are spent on “homestay” with the families in the area. Yet, the organisation realises the importance of not just taking from the community, but being able to give something back to the area and hence the partnership with Sakha was important. 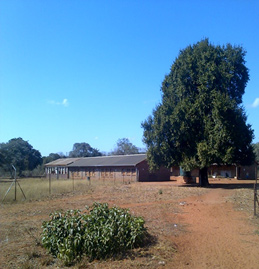 Although it was still school holidays at the time of the workshops, the students came out in numbers to listen and interact as some were in “winter school”, revising and already preparing for the final Matric exams. We heard the students want to purse careers in engineering, medicine, the arts, law and many other careers. Yet, there were many other challenges such as uncertainty about where they will source funding for higher education, as well as uncertainty about the National Benchmark Tests some universities run.

Joining Sakha on the workshops was Ms. Amber Abrams who teaches on the Global Health course with Duke and OTS, who stressed the importance of such workshops in the area, where often researchers come to mine data out, but do not return to assist. The director of OTS South Africa, Dr. Laurence Kruger, said that educational outreach is one of the key elements of the work that OTS does in South Africa and was excited to explore ways in which to sustain such partnerships.