THE 1962 STUDEBAKER RAFFLE ENDS WITH A HEARTFELT STORY 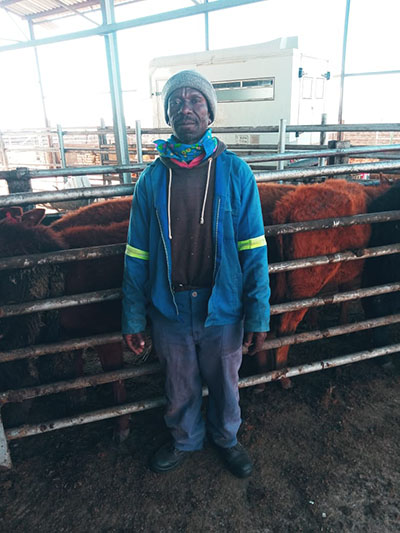 The month of August closed off on a high note for Mr Sam Q Mokoena, a farmworker from Petsana Reitz, Free State. Nothing could come as close to the exciting news that he had just won himself a 1962 Studebaker.

What is even more heartwarming is that the Studebaker belongs to his employer, Trent Odgers, who had bought raffle tickets for his employees and two sons and Sam’s name was selected among 883 other participants. Earlier this year, Trent learned about LITTLE EDEN Society’s desire to purchase two tractors that would assist with farming purposes. LITTLE EDEN is an NGO that cares for 300 children and adults with intellectual disability. Trent was generous enough to donate his Studebaker to LITTLE EDEN for it to be raffled, hopefully raising enough funds to buy the tractors. The vehicle, a genuine 1962 Studebaker, imported from the USA (apart from the bakkie which was manufactured in South Africa) has the original V8 Packard engine and 3 speed Dodge (Chrysler Corp) automatic gearbox and has strong leaf springs on the front and rear. Truly a collector’s item!

Raffle tickets were valued at R200 on www.quicket.co.za and over R175 000 was raised. On the day of the raffle, Tuesday the 31 August 2021, the process was audited by Nwande Incorporated and streamed live on LITTLE EDEN’s YouTube and Facebook platforms. Among the guests was the Chairman of the Studebaker Club, Detlev Borner, who is also a good friend of Trent. Mr Borner gave a brief history on the Studebaker model. The Studebaker Club have offered free membership for a year to the winner of the car and a Studebaker hamper. The CEO of LITTLE EDEN, Xelda Rohrbeck, who was joined on stage by a few of the residents, expressed gratitude for the support received for this campaign. “A very special thank you to all the supporters of LITTLE EDEN. It is this through this support that has enabled us to have a successful raffle of this magnitude and to make a significant contribution to the aim of contributing towards a tractor.”

The pulled-out ticket had Sam’s name. He was called on the mobile number provided and there was no response. The receiver called back and said his name is Grant, who happens to be the son of our donor, Trent! I mean what are the chances! It was later discovered that Sam does not have a mobile number and his ticket had Grant’s cell number. Everyone involved was later contacted to ensure that Sam was notified as the rightful winner. Sam has a very interesting story, as related by Trent. He had been working for a previous employer and when Trent took over the farm, Sam had not been paid by the owner and looked to Trent for payment. Following his payment, every morning he would arrive at work under the new management, even though he was not employed to be part of the new team. When the other labourers would jump in the bakkie to head to work, Sam too would jump in and would faithfully report for duty. Trent figured he should offer him a job as the gardener. This was a 2 months contract. Sam would help out on the farm and became an asset, even assisting with the Studebaker from time to time. To date, Sam arrived on the farm in 2011 and has never left. Asked how he feels about Sam’s new win, Trent has this to say, “It couldn’t have been won by anyone more deserving than Sam!” Sam has chosen to sell the car to Detlev who has agreed to honour the deal.

In speaking to Sam, he was completely overwhelmed. He shared how his wife had passed on in 2013, leaving him with two young kids, the youngest aged 1 year 5 months and describes it as an incredibly difficult time. He currently lives with his brother, who has been battling with ill health. With the help of his sister, Sam makes it his mission to provide for his children. “What a great blessing this is. God has finally answered my prayers. I have been able to take care of my children with the little I had, I can now take care of them with much more and will use this money wisely.”