UMLAZI’S HARVARD PRIDE MAKING GOOD ON PROMISE TO GIVE BACK IN SA. 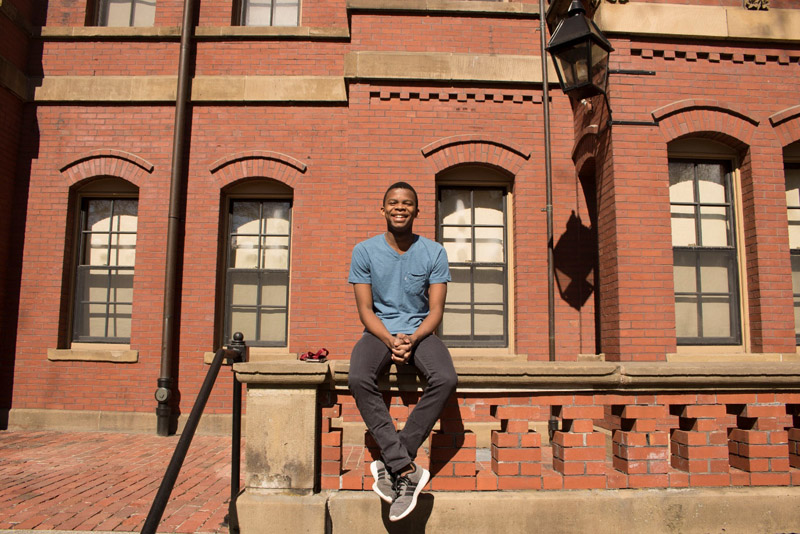 Ever heard of the Dlulisa Initiative?

Mfundo Radebe, who made waves last year after being accepted into Harvard on a full scholarship, will return to South Africa next month to launch an ambitious initiative to assist underprivileged learners throughout the country.

“The Dlulisa Initiative will truly make a big difference for South Africa,” says Radebe, speaking from his digs at the prestigious university.

“We already have significant commitments from private schools and companies to form those pivotal relationships that will allow the initiative to succeed. When I arrive in South Africa in May, the initiative will kick off and collections from the schools that have signed up will begin. We have also received several endorsements, including from Nobel Prize Laureate, Wole Soyinka,” he says.

Radebe was raised by his single mother in the small town of Umlazi, and faced great hardship in his younger years, but he refused to let these circumstances block his path. He worked hard at school, came top of his class and then began writing scores of letters to the ADvTECH Schools Division board letting them know that he was unable to afford a private school education, but desperately wanted a place at Crawford College La Lucia.

Last year, he graduated from Crawford after having become the first ever recipient of a full scholarship from the school, which is part of the JSE-listed ADvTECH Group, Africa’s largest private education provider. The group spends more than R100 million each year to enable gifted students to receive the world-class education they might not otherwise be able to access.

Every year, Ivy League universities visit ADvTECH schools to scout for the brightest and most promising young learners, which last year saw Radebe being offered the opportunity of a lifetime.

Not content to focus on his own success and studies however, Radebe also spent his first year on foreign shores setting up the Dlulisa Initiative, forming partnerships and setting up organisational structures.

The strategy of the initiative is to partner with companies as well as private and more privileged schools, even those who are already passing on resources, to provide a consistent stream of resources to underprivileged schools.

“By doing so, we also seek to create a network of accountable South Africans who will be making a difference. We allow our schools to track the difference they have made and to write personal messages of support to recipients. This is important. We are building an international advocacy campaign that will take these messages of support and the growth of the system that we will see to then fundraise internationally for the initiative, to ensure that we can get every single South African child the books and resources they need,” says Radebe.

Asked about what led him to start the initiative, Radebe says: “Dlulisa is truly about the big picture of what we can do as a country.  When I was at home after my first semester at Harvard, I realised that many of my textbooks, study guides, and stationery packs were still in my cupboard. My friends told me the same of theirs.

“I realised how fortunate I was as a young man from Umlazi to have been given all of these resources from my school Crawford. Without these resources, I would have never finished with eight distinctions. I might not have been a Harvard student today. I recognise that where I am today is through hard work, yes, but it is also about luck. That is why I think that every child should be given an equal playing field so that they can be the best that they can be. This is what we owe every single South African child as a country. It feels like a deep personal commitment that I think we should all undertake.”

Radebe has put together a formidable team to ensure the success of the Dlulisa Initiative.

“This initiative brings together some of the most accomplished young people, I believe, in the world, and I am privileged to say I call each and every one of them my friends,” he says.

“In South Africa, we have people like Jess Mandel who has improved Port Elizabeth’s governance structures, to Sibongakonke Kheswa who helped raise millions in the CEO Sleepout to help the homeless. In the United States, we have Miles Weddle who has a tutoring business that has tutors throughout the country, Russell Reed who started a non-profit that connects those living with disabilities to employment resources, and Katie Mulkowsky, who has conducted groundbreaking research on resource allocation in France and South Africa.

“We are all very passionate about South Africa. My American friends have been deeply touched by my story about how a township boy can make it to Harvard and feel a profound conviction that we should create a system that allows more people to get here.”

On top of his challenging studies, dealing with a healthy dose of culture shock and making the world a better place, Radebe also continues his habit of raking in the awards.

While still at school, he became a national debating champion with a strong interest in politics. He spoke at the National Mandela Day Gala and was also invited to become the first ever national young social cohesion advocate. He also won the international My Magna Carta – a creative essay competition in which young people are invited to create their own Magna Carta for the 21st century, a document that safeguards and promotes the rights, privileges and liberties of their country. Mfundo was named the international grand champion at the finals in London.

Recently, he was the recipient of a Civil Society/Social Cohesion Award at the SA National Youth Awards.

He says Crawford’s emphasis on academic excellence was integral in his success, in that it placed an emphasis on focusing on each individual child’s progress and not collectivising them.

In a few years from now, the future Harvard graduate whose peers already call him Mr President, aims to return home to effect even greater change, by entering South African politics.

“I am not sure in what role, but I feel that my deep desire to create an equitable and fair country where all children are given access to the resources they need can only come about when I step into the political arena,” he says.

And his message will be one of perseverance, of never giving up.

“The reality is that many South African children are not given the chance to be the best that they can be. I am today, however, because I constantly pushed myself and because I refused to give up to the status quo.”

For more information or to get involved in the Dlulisa Initiative, visit www.dlulisainitiative.org