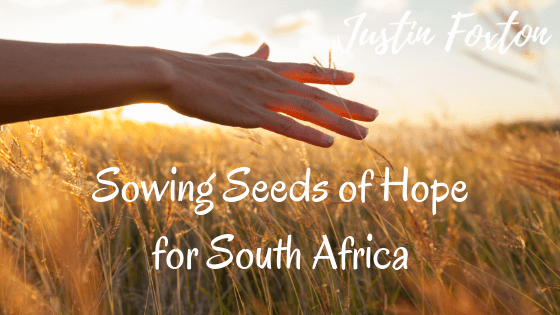 “Primum non nocere” is a Latin phrase that means “first, do no harm.” Apparently, all medical students are taught this fundamental principle and it basically means that when faced with a problem, it may be better to do nothing, than to risk causing more harm than good.

It may strike you that this is rather negative. If the whole world – when faced with an issue – did nothing for fear of causing more harm, then presumably nothing would ever get resolved. But, that is not the power of this maxim. Its potency lies in the somewhat un-Western notion of stillness, silence, non-doing when action or words would simply fan the flames of trouble and strife.

An example: Marikana. If “primum non nocere” had been the guiding motto of the police during those horrific days in August 2012, that atrocity would likely never have happened.

The aim of this monthly feature is to give all of us small, achievable actions that we can each do daily to contribute to the healing of our nation. But perhaps we should have begun with something even more basic; on the surface, simpler – yet fundamentally more challenging. Primum non nocere – first, do no harm.

What might this even look like for us living in South Africa? On a personal level, I think it suggests that if we have nothing positive to contribute either with words or deeds, then rather say and do nothing. Practically, this might mean bowing out of pessimistic conversations with friends or colleagues and taking a decision not to forward negative (and often untruthful) articles or statements on social media. If you have decided to leave the country to leave with the excitement of a new adventure top-of-mind rather than feeling the need to justify that decision with negativity about South Africa. You see negativity is an energy just as positivity is. We build stuff with positive energy. So, if you don’t feel positive – which is fine – then choose simply not to be negative. First do no harm.

On a broader level, I would suggest to companies and NGO’s, ask whether your actions – as well meaning as they may appear – may cause more harm than good. An example: you may decide that a community close to your business needs a community hall because you see people holding meetings under trees. You build a beautiful hall using your CSI budget but are horrified that within a couple of months the hall remains unutilized and has been vandalised.

You say: “What ungrateful people – we shall never help them again”. Trouble is, you didn’t ask them if they needed or wanted a hall. You made an assumption based on what you thought they needed. In fact, they tore down the hall and sold the materials so that they could raise money for piping water from the one community tap they have to several outlets. Now, you are angry at them and they are angry at you. Nothing good has come from what began as trying to do something helpful.

Another example of this comes out of my NGO The Peace Agency. We raised funds and built a home for abandoned babies in Hammarsdale, Kwa-Zulu Natal. We chose this area because one of our best carers from our other Baby Homes in Durban Thando Dlamini lives there and we wished to upskill and empower her to run her own facility. We built the place and it took forever. Literally nearly 3 years. But during this period, we were able to do some unplanned research. We were fortunate to discover that the community there didn’t need a home for abandoned babies – they don’t have any issue with abandonment. They needed a creche. So, we changed our plans slightly and Thando now runs a top-notch facility.

The lesson here is to conduct in-depth needs analyses before embarking on any community projects (yours or others). And if the need is not immediately evident and supported by all within the community – wait. First do no harm.

Finally, Napoleon Bonaparte famously said that “a leader is a dealer in hope.” If you can, choose to deal in hope. If you are running low on hope – just enjoy a period where you don’t deal in anything.

Rest perhaps and take all the time you need to rediscover a sense of possibility.

His writing is dedicated to the memory of 17-year-old Anene Booysens: gang raped, mutilated and murdered and Emmanuel Josias Sithole: beaten and stabbed to death.