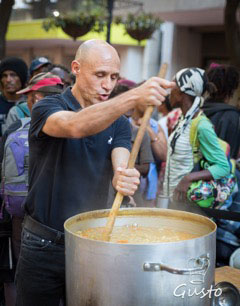 Founder of non-profit soup kitchen, Ladles of Love, Danny Diliberto (49) lived as a homeless person for 48 hours to experience what life is like for over 7000 homeless individuals in Cape Town.

During his time on the streets on the 29thand 30thof November, Danny lived as a homeless person, with no money, no cards, no cellphone and no assistance.

“I’m passionate about this country and its people. But there is one particular section of our society that is being overlooked and I want to change that. I hope to really show a taste of what life is really like for the have-nots, so we can all better understand it.” – says Diliberto

With footage recorded on a Go Pro, Danny hopes to highlight in a mini documentary the daily challenges these marginalized individuals face.

“ During my time on the streets, I will be wearing a chest cam to capture my experiences and will be carrying out interviews with some of the people I encounter. I will be visiting shelters, soup kitchens and rehab centers to show you how they work. I’m not sure where I will be able to keep clean or use a bathroom – but this is what I want to understand too” – says Diliberto

With his social experiment, Danny hopes to raise R48 000, for his soup kitchen that currently serves approximately 2000 meals a week to underprivileged individuals, schools and communities. Danny set up a campaign on donations based crowdfunding platform, BackaBuddy.

Danny hopes to create a dialogue around homelessness and encourage others to be proactive in solving the issue instead of looking away.

” I am hoping that once people understand the hardships of being homeless and that it is not just simply telling them to go get a job, then hopefully people will be more compassionate and understanding. I feel this will then make everyone more patient and proactive towards homelessness, making the situation better for both homeless and those not living on the streets.” – says Diliberto

Danny hopes to give the homeless a voice.

“Homeless people are an overlooked and marginalized section of our society. We don’t see them, and they are often invisible. With my BackaBuddy campaign I hope to give them a voice and share their stories and experiences, so shed light on what life is really like for the homeless” – says Diliberto

“We can no longer constantly complain to the authorities expecting them to solve the problem. We all need to start thinking out the box and start becoming more proactive in making the situation better for everyone. I hope the public will support my BackaBuddy campaign so we can continue making a difference” adds Diliberto

Support the campaign by donating on BackaBuddy here: https://www.backabuddy.co.za/homeless-in-cape-town-the-48hr-challenge