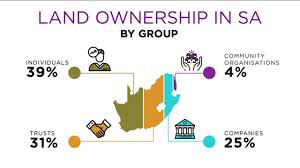 In sub-Saharan Africa, about 80% of people depend directly on land to grow their food. But over two-thirds of the continent’s productive land is now degraded – it has, to some degree, lost its productive capacity. This is driven by years of overgrazing, inappropriate agricultural practices, extreme weather events and the conversion of forest land into farmland. As Karl Hughes explains, reversing and preventing land degradation is critical if ecosystems are to keep working. But research shows that there is huge variation across – and within – seven countries that were studied. This means that restoration practices will have to be carefully tailored to the local context.

President Cyril Ramaphosa writes, “The Department of Agriculture, Land Reform and Rural Development (DLRD) recently announced that members of the public will be able to apply to lease 700 000 hectares of underutilized or vacant state land in seven of the provinces.

Agricultural land is the mainstay of our natural resource base. The availability and sustainable use of farmland to grow crops and for animal husbandry is key to our very survival.

South Africa has vast tracts of land suitable for agricultural production, with 37,9% of our total land area currently being used for commercial agriculture.

Like many other countries, our arable land is under threat from land degradation, water scarcity and urban encroachment. We are also losing prime agricultural land through land-use changes.

Given our history, broadening access to agricultural land for commercial production and subsistence farming is a national priority.

Between 1994 and March 2018 the state has delivered 8,4 million hectares of land to previously disadvantaged individuals under the land reform programme. But this progress amounts to less than 10% of all commercial farmland.

In my State of the Nation address earlier this year I committed that state-owned agricultural land would soon be released for farming.

This is a major milestone in the agrarian reform process, and gives effect to the promise of the Freedom Charter that the land shall be shared among those who work it.

We must also ensure that farmers are supported along the road to sustainability and profitability.

As part of this programme, beneficiaries will be trained in financial management and enterprise development. Experience has shown that emerging and small-scale farmers often lack the financial skills to exploit market opportunities and integrate with value chains.

The South African government has made almost 900 farms available for emerging farmers to lease on underutilised or vacant state land. The government is offering 30-year leaseholds, with an option to buy, which raises the old issue about how these farmers can raise finance without collateral.

The plots in question are found in all provinces with the exceptions of Gauteng and the Western Cape.

The District Beneficiary Screening Committee will screen the applications, which, in turn, will make recommendations to the Provincial Technical committees (PTC). The PTCs will review these and then submit them to the National Selection and Approval Committee for approval. Applications who don’t make the grade can turn to the Land Allocation Appeals Committee.

South Africa’s efforts at land reform, which aim to rectify enduring racial disparities in ownership, have generally been regarded as a flop. This is, in part, because of the bureaucracy involved, which is overseen by a state clearly lacking capacity.

This is one of the points driven home by Wandile Sihlobo in his insightful book on land reform, Finding Common Ground, where he details cases of prospective emerging farmers who gave up after waiting years only to discover their applications had not been processed.

It will be interesting to see in a year’s time how much of this land is on its way to becoming productive and commercially viable, and how much of it will remain underused.