Manelisi Mapukata is an organic urban farmer based in Gugulethu, where he lives with his wife and three children. The name ‘Manelisi’ means ‘last born’ in isiXhosa, a position in the family that entitled him to the inheritance of his father’s home when he passed away. Manelisi learned to love gardening when he was a young boy, and he has decided to use his newly acquired land to pursue his passion for growing vegetables. 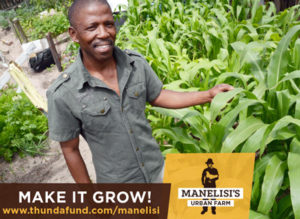 Determined to expand his knowledge of farming, Mandelisi attended a training course offered by gardening centre Abalimi Bezekhaya, sought advice from neighbouring farmers and even collected ‘How To Grow Food’ articles from YOU magazine. He also purchased some chicken and geese, using their manure to fertilise his soil. In this way, Manelisi managed to sustain himself and his family off of the produce he grows in his garden.
What does farming mean to Manelisi?
Manelisi now shares his gardening knowledge with the Gugulethu community in the hope of inspiring others to do what he has done – use their own backyards to better their lives. He hands out seedlings to get people started and shows them how best to utilise the space they have. However, Manelisi maintains that his very best advice for farming is simply to “love your plants, because they won’t survive if you don’t. Everything in this world has ears; you must love everything that you touch’.

Mandelisi practices this philosophy of love and care by mentoring future generations and teaching them what he knows. Not only does he give gardening tips to his neighbours, but he also teaches children at local schools how to plant and grow their own seedlings. His aim is to show the youth in his area that there is an alternative to getting involved in drugs and gangs.

How can you help?
Manelisi’s hope for the future is to develop a farm that might one day be able to keep a whole community of youths off the streets. By donating to our Thundafund campaign you can be a part of helping him in this admirable endeavour. He has recently been granted additional land on which to expand his farm, but he lacks the resources necessary to develop it to its full potential.

Manelisi has big dreams for his new farm – to have a container in which he can grow mushrooms, to start a restaurant using his fresh produce and to run everything off of solar panels. For now though, Manelisi just needs funds in order to be equipped with the most basic of farming facilities and tools, such as a water pump, a chicken house, poles and fencing. Ideally he is hoping to raise enough to build a farming tunnel in which he can grow flowers and vegetables.

Manelisi will be able to buy a gardening tunnel and the fencing, tools and water system he needs for his new plot of land. Remaining funds raised will go towards purchasing solar panels and setting up an on-site restaurant, a mushroom-growing container and a chicken house.

Get involved!
Make Manelisi’s dream come true by contributing and sharing his crowdfunding campaign: www.thundafund.com/manelisi
You can also follow his story and progress on Facebook (www.facebook.com/manelisiurbanfarm) and Twitter (www.twitter.com/manelisifarm).

For any further information, you can contact Rosie Campbell or Kait Keet at Design for development rosie@d4d.co.za 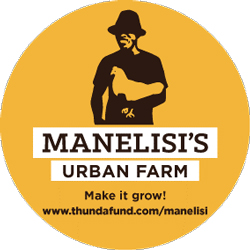