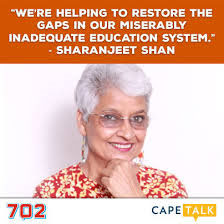 South Africa’s youth face many challenges, among them an education system that too often leaves them ill equipped for the world of work. Sharanjeet Shan, however, is using her role as executive director of Maths Centre, a Johannesburg based not-for-profit, to make a difference – she tells us how.

South Africa’s been a story of many twists and turns. Abundant natural resources, solid infrastructure (though with room for improvement) and its geographic location as the gateway to Africa all augur well for the future. But it’s clear that all is not well in the rainbow nation. Stalling economic growth, frequent power blackouts and rising unemployment present a complex array of challenges to the country’s policymakers.

For Sharanjeet Shan, the surging level of joblessness is of particular concern. Recent data shows that the unemployment rate is now at 26.4%, the worst level in 12 years, and more than 50% among the young. Shan, the executive director of Maths Centre, a not-for-profit organisation that strives to improve maths, science and technology education, traces much of these problems back to the country’s schools.

“The constitution tells us that all children are entitled to an education but if you’re walking up to 10km every day to and from school, often without breakfast, then all the disadvantages get compounded,” she says. “Only half of the class of 2014 completed grade 12, which is the last grade at school. Where are the missing 500,000 students? Where did they go? Nobody can tell you that. By the current figures, 7.5 million young people between the age of 18 and 35 are not in education, employment or training and nothing is accessible to them. This is a crisis.”

Shan was appointed executive director of Maths Centre in 1995. Born in India and educated in England, she taught math and science for 19 years in England and rose through the ranks to become a school inspector before moving to South Africa. “For some reason, people around the world look at mathematics as this horrendous subject that is difficult and frightening,” she says. “When I arrived here only one out of 300 black Africans – less than 1% – were passing the subject at a level good enough to access further education and higher education. This was a real legacy of apartheid, when young black Africans were not allowed to study pure mathematics, just basic arithmetic.”

The constitution tells us that all children are entitled to an education but if you’re walking up to 10km every day to and from school, often without breakfast, then all the disadvantages get compounded,

So, there was much to do then and, unfortunately, much to do now. The World Economic Forum 2014-15 Global Competitiveness Report ranked the quality of the education system 140th out of 144 countries and placed the quality of maths and science education very last on its list. Shan’s organisation aims to equip teachers, learners and parents with learning materials and programmes to help improve these results, focusing on maths, science and technology. “We believe it starts with teachers,” she says. “So we help them gain their qualifications and experiences, and our other efforts include providing teaching and learning materials.” In 2014, the centre had worked with 520 schools, with 174,695 maths and science students benefiting from their guidance – the 81% pass rate speaks volumes, but Shan is keen to stress the bigger picture.

“Maths is pivotal to economic growth,” she points out. “We are growing into a global economy and everything has a connected thread. Understanding qualitative and quantitative numeracy is the key to being successful because in any business you need to be able keep the books, do accounting, understand profit and loss, and so on. There isn’t a single business as i understand it where mathematics up to a certain level is not required.”

The role of mathematics – and science and technology – to the country’s future prosperity suggests that the centre should have a close relationship with South Africa’s government. This is true – but only up to a point. “The relationship with the Department of Education, broadly speaking, is pretty tenuous,” she admits. “In South Africa we haven’t come to a point yet where we can put together an NGO/departmental/business triangular relationship where projects are conceived and implemented with everyone playing their part.”

Communication, she continues is key. “We work in the department’s space, so we have to be very respectful and now, having established a sense of credibility, we are invited to the different forums where one is involved in looking at in-service training and education, professional development of teachers and so on. The relationships with provincial departments are much better because the projects are more connected through the district offices. They have the authority to roll out the national strategy in their own way in each province and we work very hard to have good relationships with them. But at the end of the day, we are an NGO and for our funding, I always refer to myself as a ‘professional beggar’. Unless you have money to work with, then you will close – so this is always a substantial part of my time.”

Shan and her colleagues use their funding, together with donations such as calculators, text books and maths sets, to run a series of campaigns, ranging from skills development to encouraging parents to become more involved in their children’s education. “A nation runs on skills of different kinds – engineering in particular,” she points out. “A nation does not run on a few people going to university and acquiring PhDs and publishing papers. While this is necessary, our advocacy campaign for skills training has really captured the imagination of the big private sector organisations we work with.

“Another advocacy campaign is “Parents matter, parents count” because parents are often scared of getting involved with their children’s school and asking for a report, for example. When I was a schools inspector in England it was the other way around. This campaign is about getting parents together and showing them how to get involved in schools, without antagonising and aggravating teachers as unions are very big here and they can stop anyone doing anything, including us.”

Shan goes on to cite the power and attitude of the country’s unions as a key hindrance to further progress. “Everything must be approved by the unions,” she says. “The biggest issue for unions should be that our workers need to access more wealth and opportunities, none of which comes without education. So, unions should be pro-education but very often I’m afraid that they are not, mainly due to systemic problems within their leadership. Everyone thinks they are right and everyone else is wrong. And it’s getting worse as we are now falling behind other African countries in literacy and numeracy.”

Such issues temper her natural optimistic perspective – but this is something she fights to hold on to. “Let me put it like this: being a champion of children and of parents and grandparents means I have to be optimistic,” she says. “I can see the possibilities and solutions crystal clearly, and as long as someone in government over the next 10 or so years has the will and determination, then yes I am optimistic for the children we work for. But transformation is not going to be easy and won’t happen overnight. We all need to come together and focus on what really matters – which is the country’s children.”