The Mandela Multi-Purpose Exhibition Centre was officially opened in Howick, KZN exactly 30 years after his release on 11 February 2020.

Situated on the R103 just off the Howick North off-ramp on the N3 this new multi-purpose centre features a world-class exhibition as well as an impressive work of art constructed by South African artist Marco Cianfanelli. The sculpture is made up of 50 steel columns strategically arranged so that, from a particular vantage point, they come into focus as Mandela’s face. 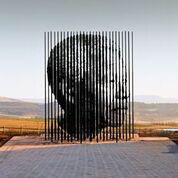 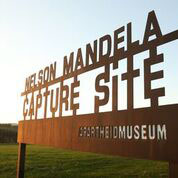 The Director of the Apartheid Museum in Johannesburg, Christopher Till, who is responsible for the project, told media that the new Visitor Centre is “an extension of what we do at the Apartheid Museum. We felt that we should put together an exhibition that a new generation of South Africans would be able to identify with.”

Visitors are met with a new immersive exhibition that rivals even top international museums. The space includes a 360o surround film, a dazzling display of historical artefacts and photographs, as well as a replica of the Austin Westminster that Nelson Mandela was being driven in when he was arrested in 1962. 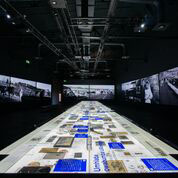 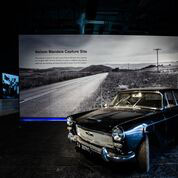 The story of the exhibition focuses on struggles in KwaZulu-Natal in particular. Starting with the Bambatha Rebellion of 1906, it traces decades of resistance, culminating in the mass mobilisation of the 1980s. In this way, the place of Mandela’s capture becomes a gateway to understanding the history of this province, and its contribution to the freedom of all South Africans.

Upgrades to the Site

“A great deal of hard work has gone into this site since the day it was officially unveiled on 5 August 2012,” said Tourism Minister Kubayi-Ngubane. The minister was joined by KZN MEC for Cooperative Governance and Traditional Affairs (COGTA) Sipho Hlomuka. Together with KZN Premier Sihle Zikalala, they made history as they officially unveiled the Visitor Centre to the public.

“As a South African, one cannot help being overcome by emotions in this place. It is here that apartheid police finally captured Madiba on 5 August 1962 after he had been on the run for several months,” said Hlomuka.

Ms Thuli Mtolo, Head of Operations at the new Visitor Centre, has been overwhelmed by the response the centre has already received. “We are welcoming hundreds of tourists through our doors every day – both local and international,” she said. “Our hope is that this space becomes not only a place of reflection but also one of change. We want Nelson Mandela’s legacy to inspire both South Africans and visitors from abroad.”

Mtolo’s words rang true the following day as COGTA organised for local school children to visit the Capture Site and experience the exhibition for themselves.

The Visitor Centre plans to welcome many more school groups in the future and renovations are underway to develop an Education Centre on the Site.

IT REALLY IS WORTH A VISIT – PLEASANT SURROUNDS, COFFEE BAR, EASY PARKING, FASCINATING MUSEUM AND SCULPTURE