A Great Initiative from Prominent Paints! 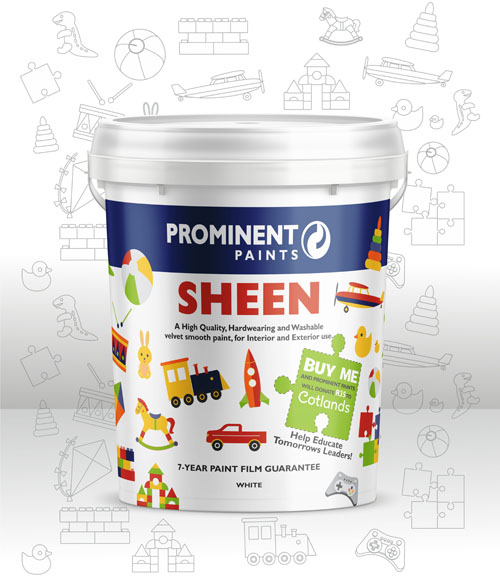 In celebration of Youth Month 2017, PPG Group company Prominent Paints, has launched its second #feelgood fundraising campaign in support of non-profit organisation – Cotlands.  The paint company has launched a special Cotlands promo pack which is retailing for R1099.00 incl VAT and is available exclusively through its Select Store partners nationwide.  For every promo Sheen White PVA 20L paint sold – Prominent Paints will donate R35 to the early childhood development charity which serves vulnerable children up to the age of six. Upping the ante – this year the company has set a target of R175 000 and must move 5 000 units to achieve this goal.

Prominent Paints spokesperson for the campaign, Lani Carstens, has challenged contractors, builders, body corporates, schools and home DIY enthusiasts, in fact anyone needing white paint, to pay it forward by supporting this worthwhile cause.   Adding to this she says that with a shelf-life of well over 12 months before opening, there’s no reason not to stock up with the Cotlands promo paint ahead of the Spring painting season.

“Cotlands focus is on addressing early childhood development and education gaps. Learning and youth development is the foundation of our future and something everyone at Prominent Paints is committed to supporting,” says Carstens. “We believe the single most important investment any country can make is in its people and this begins with education from the earliest age.  By the end of Grade 12, we have lost half of every group entering the schooling system, which is a disturbing trend. Government cannot be expected to do it all. We need to bring about change and reform the current education system collectively.”

Carstens adds that by partnering with Cotlands Prominent Paints is investing in the future leaders of this county. “For these reasons, when deciding on the beneficiary for this corporate giving campaign, Cotlands was an easy choice.”

By providing early learning playgroups, toy libraries, nutrition, health, psychosocial and residential child care to vulnerable children, Cotlands is able to give young children in under-resourced communities the opportunity to thrive into adulthood. Cotlands currently provides these services to more than 8 000 beneficiaries around the country.

“Whether it’s a decision that will impact customers, staff or members of the surrounding communities in which Prominent Paints operates, we believe that whatever we do must be guided by our mantra to: Make it Better. For this is the very essence of Prominent Paints.  It is our hope that this initiative, which is geared towards making life better, will deliver beyond our wildest expectations and in so doing serve the children in Cotlands care,” concludes Carstens.

To find out more about this deserving charity that relies on financial support to survive, visit www.cotlands.org.za

Prominent Paints was established in 1981 and celebrated its 30 years of manufacturing in SA in 2011.  Prominent Paints is a proud member of the Green Building Council of South Africa (GBCSA) and from an ecological perspective, its paint is lead free, complies to, and even exceeds the standards set by the GBCSA.

Drafted and distributed by SIMONSAYS communications on behalf Prominent Paints: