Allister Sparks: Become activist citizens in this polyglot village of ours 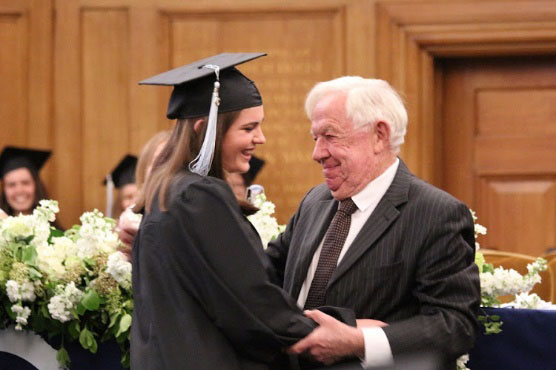 Allister Sparks in May at the graduation ceremony of his granddaughter, Vicky Sparks at Southbank International School in London. Picture: MICHAEL SPARKS

I so enjoyed this read. Allister Sparks’ book “The Sword and the Pen” is a must read for anyone interested in journalism and the pursuit of truth. In this world of fake news and moral decline, finding the truth, standing up for it, defending it and articulating it seems to be an ever-diminishing skill – particularly amongst politicians, and sadly, even amongst journalists. Steuart Pennington

“I come to you not as an educationist or a vocational specialist to tell you how to get on in you careers. I am a journalist, a news hound. Have been all my life. I joined my first newspaper 66 years ago — I guess that was before many of your parents were born. Makes me feel a bit like Methuselah.

So what has this old fogey got to say to you?

Well, if journalism does anything, it pitches you into the vortex of life. You meet a huge range of people, from kings to crooks, and you witness the passage of events from close-up. It’s life at the rock-face. And in the course of that you get to know a lot about life. In bits and pieces, I guess. It is said that a good journalist gets to know a little about everything, and a lot about something.

In my case, I suppose, what I have come to know a lot about is the turbulent history and politics of my own country. I have witnessed the rise of the extreme racist policy of apartheid and seen its collapse. I was there as the great Nelson Mandela gave birth to the new democratic SA; and now I am watching my reborn country run into difficulties under a corrupt and incompetent president.

So what can I tell you from that rollercoaster experience?

First, that your real process of learning begins now. Now as you leave school. What school has done for you is to prepare you for a life-long learning process. I knew little when I left school; and now, in my octogenarian years, I am still learning — and aware as time runs out how much I still need to learn.

I still remember an assembly lecture by my old high-school headmaster as my class was preparing for its school-leaving exams. Learning, he said, was like climbing a mountain.

But if there is one supreme truth I have discovered in my long climb it is that there is no final truth. There is no summit to that mountain. No attainable perfection in the quest for a better life, for the perfect social order.

When you are young, you tend to be a rebel. There is so much wrong in the world that you feel you must put it to rights; you must become an activist. The old order, the older generation, is so static, so stuck in its ways, so fuddy-duddy, so ossified, that it must be broken down and make way for a new, more dynamic, more equitable order. If you are a worthwhile young person you have to be an idealist. Maybe even a revolutionary: a Che Guevara, whose portrait hangs on so many young people’s walls.

Of course it’s not only young people who are attracted to these radical ideas. Marx and Engels and Lenin and Stalin and Fidel Castro were not young. But young people are easily attracted to ideologies that seem to promise some kind of messianic triumph of good over evil and the advent of the perfect solution.

But be warned — there is no such thing. There is no utopian solution. It’s a nice idea, but the quest for it can be very dangerous. Because the recurring promise of ideological solutions to all the ills of the world have been the cause of most of history’s great conflicts.

This doesn’t mean you mustn’t become an idealist. Oh no! That’s what youth is for, to inject a wake-up jab of idealism into the stodgy old society. It is your duty as citizens when you leave here to be idealists, activists if necessary. Never allow injustice, or the violation of human rights, or anything that might lead to that to pass unchallenged. Always remember Edmund Burke’s admonition: “All that is necessary for evil to triumph is for good people to do nothing.”

But always beware of the pitfalls of ideologies. They can be intoxicating. Idealism yes, utopianism no. And there’s a thin line between. Be an idealist, but always have enough empathy to see the other side of any coin.

Now let me return to where I began, with how fortunate you are to have had your education here in this broadly internationalist environment. I want you to look at the world you are about to plunge into. It’s undergoing the most dramatic change in all history.

Let us take note, even as we gather here today, that the pace of global integration is speeding up. Jet travel and digital communication have ensured that. Business has become transnational, and all those involved in it have spread around the globe as a result. And as long as the wide inequality gap remains, the “wretched of the earth,” as Frans Fanon called them, will keep moving relentlessly towards those parts of the world where they believe they will have better lives.

There is bound to be a backlash in the developed countries against this relentless human influx, but believe me it is unstoppable — whatever the likes of Donald Trump and Boris Johnson may say. It is going to be one of the most challenging social and political realities that your generation will have to face.

So my message to you is this: be conscious of the need to live harmoniously in this polyglot village. You enter it with a huge advantage, having been educated and spent some of your most formative years here in an international, multicultural community. You know it is not just possible, but that it’s stimulating and energising. Take that message with you as you move from here out into the great world of the global village. Become activist citizens in it.

Take Archbishop Tutu’s idealistic metaphor of the “rainbow nation” with you and apply it to the “rainbow village.” Which is to take pride in your own identity, but recognise the value and contribution of all the others alongside yours — because it is all the colours together that makes the rainbow beautiful.

Let me conclude by passing on something Nelson Mandela once told me, which was that while he was in prison, he came to understand what would be required to bring about change in apartheid SA. He was confronted by prison warders who were among the most racist and brutal of all white South Africans in their dealings with black people. He wanted to find out why. He started to engage them in conversation and soon found that they had many problems — they were not from the cream of white South African society: they were poorly educated, poorly paid, they had money problems, family problems, all manner of problems, and he being a lawyer found he could offer them legal advice.

They began coming to him for help, and that opened the door for him to question them more deeply. And as he came to understand them better, he realised that the source of their racist aggression was fear. Fear of the black majority, fear of their own economic, personal and national survival as white Afrikaners if the black majority ever came to power.

That is when he realised that the only way black South Africans could ever be freed was if he could free the white Afrikaners of their fear. That is when he began to think in terms of combining the ANC’s struggle campaign with a policy of racial reconciliation, to reduce those fears and open the way for a negotiated transformation. And that is how it happened.

So the message is, get to know “the other.” Empathy and understanding. You already have that message. Go forth with it and good luck to you all.”