DEBATING: DOES IT TAKE YEARS OF PRACTICE? 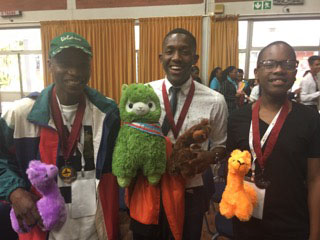 An Unlikely World. This was the theme for the 2017 World Scholars cup; a debating competition that plays host to more than 2000 students from over 50 countries. It was also a world in which three students from Haythorn Secondary school found themselves in when they flew to Cape Town to participate in the event.

With assistance from the Nelson Mandela Capture Site, under the umbrella of The Apartheid Musem, Tinotenda Mukucha, Nduduzo Nkabinde and Phiwokuhle Maphanga were given an opportunity to participate in the competition’s global round in Cape Town.

“We first met the boys when a local NGO, the Alternatives to Violence Project (AVP) came to visit the Capture Site. The premise at AVP is to give children a way to communicate the problems that they face in a disadvantaged community without resorting to violence. Debating is a wonderful example of this and so the chance to learn and share these skills with their ‘’peace clubs’’ at school was something we thought invaluable.” Georgie Marques, Nelson Mandela Capture Site

But first they had to qualify, which they did by competing in the local round hosted in Durban. Although the boys had never debated before, you would never have guessed it, and watching all three of them progress, learning each time through constructive criticism from their peers, was truly astounding. Nduduzo was even recognised for his achievements during the debate Showcase!

With a major subsidy from the World Scholars Cup and hotel rooms generously provided by Tsogo Sun the Apartheid museum was able to raise the necessary funds needed to fly the boys to the next stage, allowing all three students the opportunity to see and experience cultures and people from different parts of the world –  and a different part of their very own country! A chance unlikely to have come about otherwise. Through the mutual desire for learning they made many friends and have said that they will continue to keep in contact with the international community they are now a part of.

The Apartheid Museum and Nelson Mandela Capture Site would love to give more students the opportunity to participate in the World Scholars Cup. If you would like to contribute towards this incredible opportunity please donate to: