South African farmer Cobus van Coller scans the flashing computer screen in the cab of his harvester. As the machine mows down corn stalks, numbers instantly update, giving the precise yield and moisture levels on each part of his field.

“This shows you if you’re going to make money,” he said in a demonstration of “precision” farming — the use of technology to target farm inputs precisely to maximize profit.

As precision farmers go hi tech to boost yields, some are also adopting a “conservation” approach to land management, which involves limiting soil disturbance to build up nutrients in the ground and increase production. 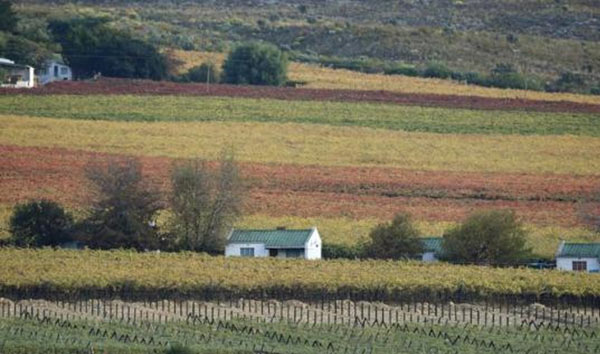 As a result of these two new methods, which are revolutionizing agriculture globally, South Africa is growing more food with less manpower — a trend with profound social and political consequences in the country.

Rising yields are welcome but jobs are being shed as farmers use more technology, while automation will lead to bigger farms.
This is at odds with policy proposals by the ruling African National Congress (ANC), which is seeking to limit farm size and create rural jobs.
Technology is threatening to uproot such efforts.

Samples are scooped from each hectare of a field, which is marked off into grids. The field map that emerges is color-coded to denote exactly what needs to be applied in each square.
Van Coller also uses the technology for planting. “The GPS tells the computer where you are, and the computer tells the seeder which product to apply and how much.”

Caption: Farmworkers walk between vineyards near Worcester, South Africa May 21, 2015. food with less manpower — a trend with profound social and political consequences in the country.  Credit: Reuters/Mike Hutchings

“We need to build up our soils again because they have been so degraded,” said Hendrik Smith of industry group GrainSA.

Rich rewards are being reaped.

Grain yields in South Africa have increased 120 percent over the past two decades, according to Nico Groenewald, head of the South Africa Agribusiness unit of Standard Bank, in part because of these new approaches.

South Africa’s maize crop this year is down one third due to drought — but things would be worse without the new methods.

Conservation farming also calls for cover crops to be planted in between the planting of cash crops, which could actually boost employment. But many farmers for now are content to till less, not plant more.

“Our precision services in southern Africa have grown 19 percent per year for the last five years,” said Rod Humphris, managing director of Omnia, which provides fertilizer and farming services.

Consolidation is another consequence. Van Coller plants 2,000 hectares and has been buying farms.

And when it comes to land, being bigger risks opposition from the ANC. Earlier this year it said it aimed “to accelerate the pace of land redistribution” to blacks from whites by capping ownership at 12,000 hectares or two farms.

Critics say many of the transferred farms have failed as newcomers lack capital and skills — and South African agriculture is becoming more capital intensive and high-tech.

Only around 10 percent of land owned by whites has been distributed to blacks since apartheid ended in 1994 — far short of a 30 percent target.

SA – the Good News via Reuters