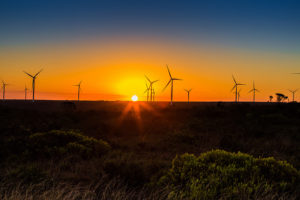 Built by a consortium led by British company Globeleq, the 138 megawatt (MW) wind farm is one of the largest in Africa. The facility was built under the government’s renewable energy programme for independent power producers.

In May 2014, Globeleq and its local and international partners unveiled the 50 MW De Aar and 50 MW Droogfontein solar photovoltaic plants in the Northern Cape. Also part of the government’s programme, the two plants represented a combined investment of R3 billion.

“The completion of these facilities is the result of a truly global partnership with the government of South Africa and Eskom, and the private sector of developers, investors, lenders, constructors, suppliers and the local community,” Globeleq CEO Mikael Karlsson said in a statement last week.

“It demonstrates significant support for independent private power producers in the region and indicates the sustainability of the renewable energy sector.”

According to Globeleq, more than 700 people worked on the site during the wind farm’s construction, and 45 percent of the people were drawn from the local community.

“A percentage of the project’s operational revenues will be reinvested into the local community through socio-economic and enterprise development programmes, creating the skills needed to support the growth of the renewable energy industry in South Africa,” the company said.

SA – The Good News via The South African