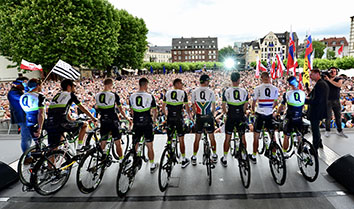 Nederburg, the exclusive premium wine partner of Team Dimension Data for Qhubeka, is calling on you to get behind the pro-cycling squad as it competes in the world’s most iconic cycling race: the Tour de France.

Now in its 104th year, the 2017 edition of this prestigious Grand Tour race started in Düsseldorf, Germany on 1 July, and concludes with the Champs-Élysées stage in Paris, France on 23 July. Comprising 21 stages and covering a gruelling distance of 3 540 kilometres, the race demands the highest skill, most extraordinary discipline and unyielding will to succeed. The riders have all these abilities and more, and together with their sponsors call on all of Africa and the world to support them.

The pro-cycling team, affectionately known as “Africa’s Team”, pedal for a cause. They raise funds and awareness for Qhubeka, a non-profit organisation that mobilises for socio-economic progress by distributing bicycles to needy South Africans in exchange for work done to improve the environment, community or academic results.  Qhubeka sees bicycles as tools of change, with access to wheels providing a connection to opportunities.  The name Qhubeka is an Nguni word that means “to carry on” or “to move forward”. It aptly demonstrates what Qhubeka aims to do:  help people to travel faster, further, carry more, be fitter and access more options.  Since its inception in 2005, Qhubeka has distributed bicycles to over 70 000 deserving South Africans.

“Nederburg is actively supporting this great cause, not only via its partnership with the Team Dimension Data cycling team, but also by housing Qhubeka’s first bicycle assembly facility in the Western Cape at our brand home in Paarl, and funding some 200 bicycles for distribution in Cape Winelands communities and beyond during the course of 2017,” says Robyn Bradshaw, Nederburg’s global brand development manager.

“Just recently, three neighbourhood watch organisations overseeing safety in the Paarl East area were given the first 50 bicycles built at Qhubeka’s bicycle assembly plant at Nederburg.   They are now better equipped to fight crime in their communities. Up until now, patrols were done on foot. Bicycles allow neighbourhood watch members to cover more ground quicker, increasing their effectiveness,” Bradshaw explains.

Master bicycle mechanics, Beverley Roode and Janine Johnson of Bicycles and Beyond (BAB) operate the bicycle assembly facility at Nederburg on behalf of Qhubeka. They established the non-profit BAB in 2015 with the specific aim to empower communities by providing training in bicycle maintenance and riding. And this is exactly what they, together with Qhubeka, are in the process of achieving at Nederburg. Four previously unemployed women from the communities that surround Nederburg now work in the assembly facility, supporting Roode and Johnson. They are Jennilee September (31) from Smartie Town, Tammy Letoli (24) from Groenheuwel, as well as Feroska Sitter (35) and Georgina Simpson (33) from Chicago.

“As a winning wine team, Nederburg believes in backing great talent, especially when it’s for a great cause. We are fully behind Africa’s pro-cycling squad and especially proud to be helping Qhubeka to change more lives. Transferring skills and building knowledge is a key priority for Nederburg, a brand that believes that on-going curiosity is essential to successfully carrying out its core business of producing award-winning wines,” Bradshaw states.

Show your support for Team Dimension Data, as well as Qhubeka, by joining Nederburg’s conversation on social media.

To find out more about Qhubeka and to contribute, please go to www.qhubeka.org.

One of the South Africa’s most distinguished names in wine, Nederburg has an exceptional track record for international and local awards, trailblazing innovations and refreshing, contemporary wines that combine rich fruit flavour with superb structure. The winery is especially well known and respected for its enviable reputation for excellence in the making of Cabernet Sauvignon and dessert wines.

Nederburg is the 2017 Platter’s By Diners Club South African Wine Guide’s ‘Winery of the Year’, and the only South African winery featured in the esteemed Drinks International ‘World’s Most Admired Wine Brands’ top 50 list this year, in 36th position.  Last year was the first time Nederburg was included, in 49thplace. The winery was also named the ‘South African Wine Producer of the Year’ at the 2016 International Wine & Spirit Competition (IWSC), where the 2013 vintage of its Private Bin R163 Cabernet Sauvignon was awarded a trophy for the best Cabernet Sauvignon in the world. That’s not the end of the story. Nederburg’s Heritage Heroes The Anchorman Chenin Blanc (wooded) 2016 recently earned a platinum award for best South African Chenin Blanc at the 2017 Decanter World Wine Awards. These are just some of the note-worthy accolades achieved by Nederburg over the past year.