In the 16 years that I have been populating www.sagoodnews.co.za with ‘positive and informed’ articles and facts – and in the 600 or so presentations that I have done on SA around the world – I have always been able to refer to the World Economic Forum’s Global Competitiveness Report (WEF-GCR) and the surprising number of measures where we are WORLD BEATER’S.

The WEF-GCR 2018 report evaluates the world’s 140 largest economies, as measured by GDP, and compares their competitiveness across 12 pillars using +/- 120 measures.

The devil is always in the detail

WEF economist Roberto Crotti explains, “The latest report uses a new methodology based on the rapid transformation of the global economy due to the fourth industrial revolution. We have used a considerable number of new measures, having said that, compared with the previous methodology the picture would look much the same. But, many of the factors that will have the greatest impact in driving competitiveness in SA in the future have not been the focus of major policy decisions in the past.”

Among its weaknesses, South Africa’s performances on the Health pillar (43.2, 125th) and Security (43.7, 132nd) sub-pillar are among the worst in the world. Driven by high incidence of communicable diseases and high rate of homicides (34 per hundred population, 135th), these factors are major challenges for the economic and human development of the country.

Low ICT adoption (46.1, 85th) is another important restraint on South Africa’s competitiveness. Only 54% of the adult population has access to the internet, and only 70 out of 100 people have subscribed to mobile-broadband services (66th). Similarly, the digital skills (116th) and critical thinking skills (78th) of the current workforce are inadequate for the progress of a successful economy in the Fourth Industrial Revolution.

So where do we do best and worst? 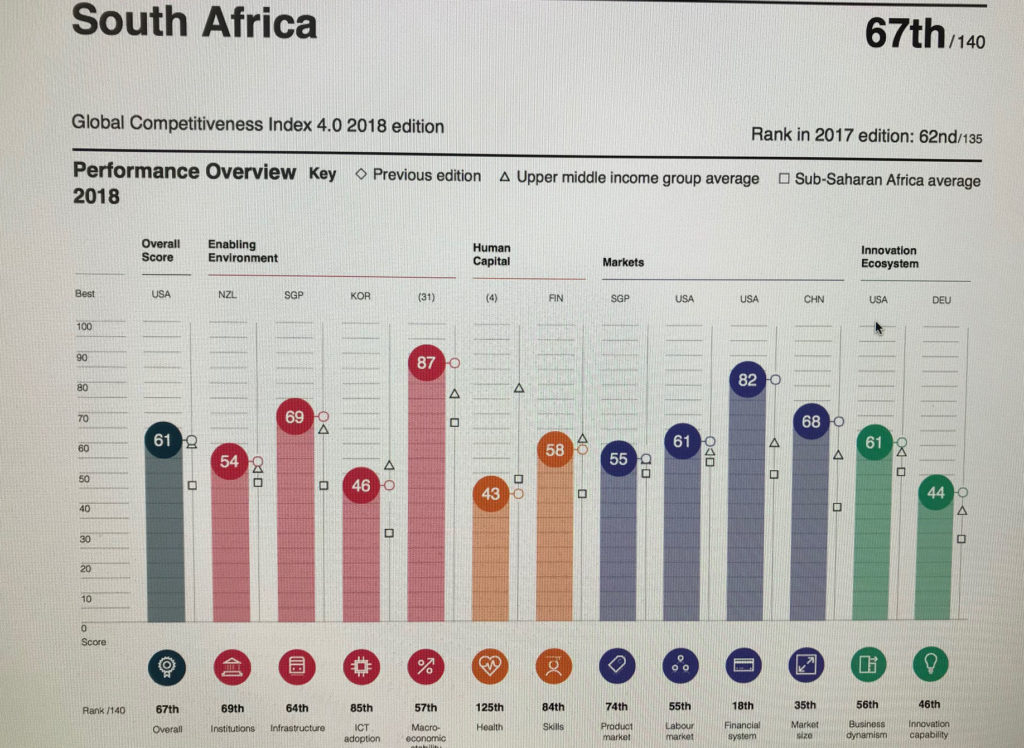 Crotti goes on to say “Successful economies in the 4IR (4th Industrial Revolution) era need to:

Clearly the legacy of the Zuma era has taken its toll. We used to excel in the measures of auditing and reporting (was 2nd now 55th); soundness of the banking system (was 2nd now 62nd); efficacy of legal framework (was 9th now 40th); and property rights (was 20th now 97th).

However, the country should improve in areas including health (125th), institutions (69th) and business dynamism (56th). While SA has been commended for its strong institutions by the credit rating agencies and does well in terms of social capital and budget transparency, the report says the government could be more future-oriented.

SA only lags behind Mauritius in sub-Saharan Africa. In terms of the Brics nations, SA beats India and Brazil but trails far behind Russia and China.

The US claimed the top spot for the first time in a decade.