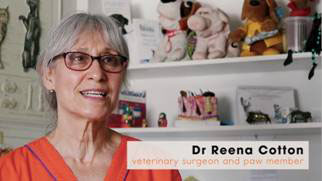 “I have a very special passion for welfare and I have been associated with Mdzananda and supporting them for at least 15 to 18 years,” says Dr Reena Cotton, “But when I heard that they had lost their largest funder and were considering closing their doors I knew that I had to step in and make a difference.”

Dr Reena Cotton, a loved and well known veterinarian in the Sea Point community opened her practice, Vetpoint, nearly 15 years ago. Being a private veterinary clinic treating small animals including dogs, cats, birds, rabbits and the like, she has always had a heart for welfare organizations and  tried to assist wherever possible.

“Since before I opened Vetpoint and was working as a veterinarian at another practice, I have been supporting the Mdzananda Animal Clinic in Khayelitsha in a non financial capacity. I support Mdzananda because it does a wonderful job in a community which might not otherwise have access to pet care. They go out to the community educating people on looking after animals and they do a wonderful job sterilizing and treating animals,” says Dr Cotton.

“When I heard that Mdzananda had lost their largest funder I was worried. They told me about a campaign that they were launching to try raise enough funds to cover their deficit and I immediately wanted to be a part of it. I decided to do so by signing up as a Paw Member.”

Mdzananda received news from their largest funder that, due to the economic state of Europe and budget cuts, this organisation would be withdrawing their funding. This financial year the donation from the international funder was reduced by 1.4 million rand. The donation will reduce further in 2018 and then full extraction can be expected in 2019 where a 2.2 million rand yearly donation will be withdrawn.

“Of course losing our largest funder is extremely scary, especially since they were covering around 65% of our monthly expenses,” says Marcelle du Plessis, Fundraising and Communications Manager of Mdzananda. “Even though it is a very big knock, we are still extremely grateful for the vast number of years that this organisation was able to support us.”

Though the thought of closing their doors had crossed their minds, the team at Mdzananda is positive that the public will stand together to support them in this difficult time.

Even though we have lost such a large amount of funding, the number of pets needing our help keeps increasing. As a result we actually need more funding this year in comparison to previous financial years,” says du Plessis.  “We want to stay proactive and as a result we have launched our largest campaign yet called “Become a #PawMember.”

Taking their funding loss as well as their increased funding need into consideration they need 3000 new Paw Members to sign up, each donating R100 per month.

“To date, four weeks after our campaign launch, we have had 280 new Paw Member sign ups. Even though this number is fantastic, it is a long way from the 3000 we require,” says du Plessis.

It was during this time that Dr Reena Cotton from Sea Point signed up as a Paw Member. A video was filmed showing Dr Cotton’s commitment to the cause and encouraging members of her community to sign up too.

“We created a video to express my commitment visually as I want to encourage more people to sign up.  We can all spare one meal out per month and instead donate R100 to Mdzananda,” says Dr Cotton.

Dr Cotton’s video can be seen on the Mdzananda Animal Clinic’s  youtube channel (https://youtu.be/_z7hYeIAkKo) . If you would like to become one of the 3000 Paw Members you can sign up at www.mdzanandasecure.co.za or contact info@mdzananda.co.za.

The Mdzananda Animal Clinic is a permanent, veterinary council registered, NPO animal clinic in Khayelitsha, a township just outside of Cape Town, South Africa, home to 400 000 people (2011 census) and their pets. The clinic serves an average of 700 animals per month through consultations, hospitalization, general and orthopaedic surgeries, continuous sterilizations, mobile clinics and an animal ambulance. Mdzananda has a strong focus on community empowerment and education to ensure responsible pet ownership into the future.