I, like many of my compatriots, sat aghast, as the State of the Nation Address collapsed in a heap. Franklin D. Roosevelt’s words below rang hollow.

I sat there mesmerised by what I never thought possible in a country so proud of its constitution, its democratic transition and its re-entry onto the global stage.
“What went wrong?” I pondered, “Why has our parliament degenerated into scenes reminiscent of the worst of possible sporting events with the ref powerless in the face of player indiscipline and spectator horror?” 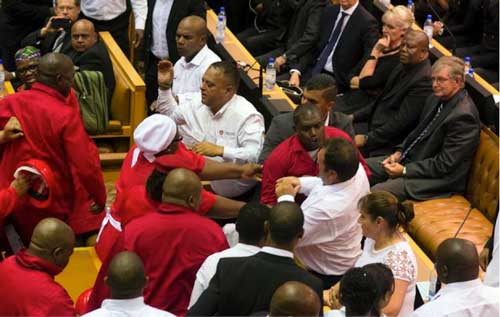 In what was possibly an overreaction the first thing I did was google ‘Banana Republic’, but I quickly got over that as I read the definition “the term banana republic is a pejorative descriptor for a servile dictatorship that abets or supports, for kickbacks, the exploitation of large-scale plantation agriculture, especially banana cultivation.”
“Well, that didn’t help. Maybe Angola or Zimbabwe, but not us, we are bigger and better than that!”
“Surely?”
Process vs Content
For many years I was involved in Labour Negotiations, mostly characterised by two (sometimes three or four, if there were rival unions) parties sitting in a room with what seemed intractable differences.
Management wanting to contain or reduce costs, Labour wanting to improve their terms and conditions and improve their standard of living.
There was little or no ‘common ground’ on the CONTENT issues. Mgt. offering 5%, Labour demanding 25%; Mgt. wanting the use of ‘casuals’ in peak periods, Labour demanding full employment rights for all. The list of ‘demands’ was substantial, sometimes seemingly endless, Mgt. resources always limited, in both ‘good’ and ‘bad’ times.
BUT, both parties knew that a legitimate, credible, fair, transparent, ethical, and respectful PROCESS was critical if there was to be any possibility of establishing common ground and reaching agreement.
Someone (a Chairperson) needed to focus on the PROCESS only, while the negotiators debated, sometimes harangued, over the CONTENT.
In parliament the Speakers job is to focus on PROCESS recognising the differing interests in the room. It is his or her job to ensure that the PROCESS is:

And take every reasonable step to protect it (and not the President).
Surely being party, either directly or indirectly, to authorising a jamming mechanism is in violation of these principles?
Surely arranging for the Public Order Police to be on standby, and then calling on them, is in violation of these principles?
Surely “putting the EFF in its place” and “showing the EFF who is boss” is in violation of these principles?
Surely our Speaker Baleka Mbete is able to distinguish her role as chairperson of her party (the ANC) from her role as ‘Chairperson’ in the State (as defender of the institution of Parliament)?
As Chairperson of the State she is the custodian of parliamentary PROCESS. It is her duty to uphold the dignity of parliament.
Surely then, she would have anticipated the rowdiness of the EFF, which was all about CONTENT, and advised the President to start his SONA with the following:
PROPOSED SONA INTRODUCTION

If the EFF remained unconvinced and raised ‘A point of order’ our Speaker should have allowed two or three and then stated firmly.
“I have anticipated many of your questions, I give you an undertaking that the President will not leave this room without addressing them, now please take your seats and remain quiet until the President has finished.”
Surely, the cabal of Ministers who were discussing the EFF’s disruptive tactics would have considered this?
It seems not, jammers and armed Public Order Police were preferred.
The response around the world has been unanimous and unambiguous.
Helen Zille writes in her Weekly Newsletter:
“The events that unfolded last week, before, during and after the State of the Nation Address on Thursday evening, will go down in history as a catalytic moment that either helped to break — or build — our democracy.
The difference between these two outcomes depends on the lessons South Africans learn from these events, and how the people who really matter in a democracy — the voters — respond to them.
The dominant narrative at present — which poses a grave threat to democracy — is that we are witnessing a battle for supremacy and control over Parliamentary proceedings between the ANC and the Economic Freedom Fighters (EFF).
Based on this assumption, the ANC went into the State of the Nation Address with a carefully choreographed “battle plan”, executed by the Public Order Police, the SABC, and the Speaker who “commanded” the ANC’s forces from a prepared script on the table before her. The ANC were going into battle (together with key institutions of state), to rout the enemy. They either did not understand, or care, about the grave constitutional implications of what they were doing.”
Tony Leon writes in Business Day 16 Feb:
“Presumably, and perhaps fatefully, the speaker and her party colleagues decided to confuse means and ends. Parliament and the people who elect it are indeed entitled to demand proper debate and not the one-trick-pony antics of serial disrupters. But when armed heavies, signal jamming and the full apparatus of the PW Botha iron fist are unleashed, then it may be said that they “destroy better than they know”.
Or perhaps they — the current rulers — know only too well and simply do not care, which brings us to the second fork in the road set out at Kempton Park in 1993. Although the parliamentary building, even the Tuynhuys presidential office next door, were designed to the architectural specifications of PW Botha, the democratic furniture of our new order was cut from new and radically different cloth. We were meant, among other things, to replace the culture of authority with that of persuasion; democracy in place of brute force. Yet what was unveiled on Thursday night was far too reminiscent of the old era and seemed to bury the new.”
Former – President Thabo Mbeki is reported in the Mail and Guardian 16 Feb to have said:
“I think we would all of us agree that what happened in parliament [on Thursday] was very troubling, my reading of the problem is that the problem is political, and you don’t use administrative instruments to resolve a political problem … If the problem is political, you’re not going to change it by quoting a rule. You’ve got to confront the political problem.
“Let’s not say, ‘You’re out of order, you can’t ask that.”
(As we went to press this statement has been contested by Mbeki’s spokesperson, the responsible journalist is holding his ground).
CONCLUSION
As citizens we vote, and in return:

And when things go wrong with regard to the above: