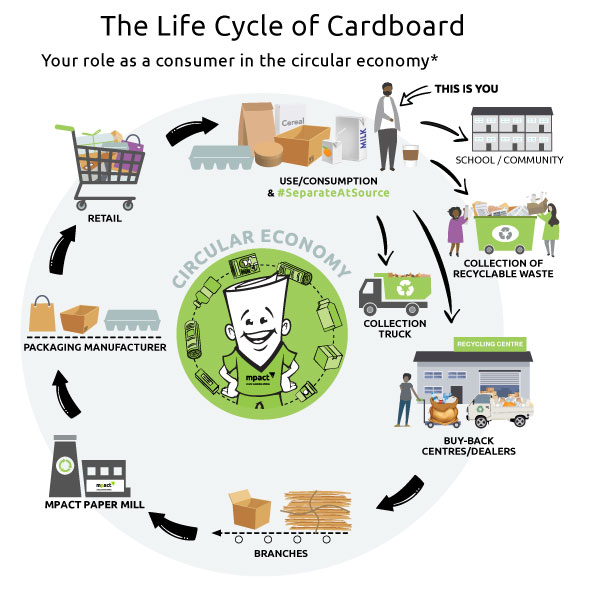 [Johannesburg: 13 September 2021]: South Africans have long become familiar with the call to recycle their waste. This has become ever more apparent as people worked from home during the Covid-19 pandemic, as the waste that was normally generated in the office parks and business operations is now being generated and piling up at home.

But, with National Recycling Day approaching on 17 September, what practical measures can people take this year to really make a difference?

“Although National Recycling Day works to raise awareness about the issue, and to encourage and galvanise people to take action, recycling shouldn’t be confined to just one day a year,” says John Hunt, Managing Director at Mpact Recycling, the leading recycler in South Africa. “Recycling can be a part of everyday life, and a little effort goes a long way in making a real difference.”

As a country we boast some strong recycling rates. According to RecyclePaperZA, in 2020 1.1 million tonnes of paper and paper packaging were recovered for recycling into new products making the paper recycling rate just short of 70%.

Over the past 15 years, a total of 19 million tonnes of paper and paper packaging has been diverted from landfill through paper recovery and recycling.

At its core, recycling means the mechanical or chemical process of converting recyclable waste into reusable material. In practical terms, it means finding ways in which to use resources such as paper, plastic and glass multiple times over, instead of letting them end up in a landfill.

“We encourage people to take the time to learn what materials can be recycled, as many different forms of packaging are actually recycled right here in South Africa,” continues Hunt. “We are currently sitting with a shortage of recyclable waste that can be used in the supply chain to create new products, due to a number of factors over the last two years including the Covid-19 pandemic, the recession before that and now consumers just not having the disposable income to buy things.”

“The drop in consumer spending, coupled with the ban in alcohol sales, for example, saw a steep decline in the volume of glass that was recycled,” he says. “65% of glass collection comes in through collectors and buy-back centres who earn a living from their hauls, meaning that their livelihoods were directly impacted.”

“It’s important to also know the difference between recyclable materials and those that are biodegradable or compostable,” he says. “Many people justify dumping the latter since the perception is that it will simply disappear and break down into natural elements. This isn’t always the case, and in many instances, it can also contaminate the recycling waste stream.”

The benefits are not just that recycling ensures waste doesn’t go to landfill, benefitting the environment, but also that it can create jobs – essential in an economy such as South Africa’s where unemployment rates continue to rise at an alarming rate. It is not just about recycling, but rebuilding too.

According to a report by the CSIR, waste in South Africa has contributed R8.2 billion worth of resources into the South African economy. The CSIR further estimates that the recycling industry provides income opportunities for between 60 000 to 90 000 waste pickers alone. Recycling is not just a matter of recovering recyclable material, it’s a total economic system.

Mpact is leading the way towards a circular economy in South Africa. A circular economy is an industrial system that is restorative by intention and design. For Mpact’s products, this means that what cannot be reused should be collected, recycled and made into new products. It is good business that benefits the environment, the economy and the world.

There are a number of ways for people to get involved and become part of this circular economy. Households separating their own recyclables from everyday refuse is the most efficient. Giving these recyclables to your local collector, or dropping  them off  at your local shopping centre is an option. There are also pick-up programmes via schools, communities and offices which not only raise recycling awareness and create income opportunities for these institutions, but push recycling levels to new heights.

A good example of how the circular economy operates right here within Mpact can be demonstrated by one of the most frequently used packaging material in the world, cardboard. It begins with separation at home or at the office, after the contents have been consumed. The used cardboard is then collected by a collector or dropped off at a school, community, shopping centre or buy-back centre. From here, the cardboard box (along with other boxes) would make its way to any of Mpact’s 14 recycling branches countrywide, where it is baled. The branches then deliver the baled cardboard to the Mpact paper mills located in Springs, Felixton and Piet Retief where it is then made into new paper. This paper is sent to any of the 9 Mpact Corrugated branches and made into new corrugated boxes. The packaged boxes are then sold to manufacturers who package the goods for wholesalers and retailers. The boxes are then unpacked by the retailers and get collected for recycling. The box of cereal or six pack of milk that the consumer buys at the retailer ends up back in the household or office again, and this too gets collected or delivered for recycling,  and the cycle continues.

“It is really important that people keep their recyclables clean, which means keeping them out of the normal bin and away from wet waste. When they are dirty, or contaminated with food or other waste, often they cannot be recycled,” says Hunt. “The sooner the waste gets into the recycling stream, the better.”

“When recycled properly as part of the circular economy, it not only benefits the environment, but people’s livelihoods too,” says Hunt. “Let’s invest in a better South Africa together.”

More information on Mpact Recycling can be found at www.mpactrecycling.co.za, or on Facebook, Twitter and LinkedIn: @MpactRecycling

About recycling: a guide to jargon

There is so much jargon that surrounds recycling that many people find confusing and misleading. However, once this jargon is understood, it is easier to work out how recycling can be part of everyday lives.

As the leading waste collector in South Africa, Mpact Recycling, part of the Mpact Group collects and receives approximately 500,000 tonnes of recyclables per annum. This includes recovered paper, cardboard, plastic, glass and cans.

All recovered paper material is supplied to the Mpact paper mills to be manufactured back into paper. This is then used to manufacture innovative board products, which are sold to the South African packaging industry. Other collected materials are sold to other recycling industry partners for processing into products and packaging.

Mpact Recycling runs numerous pick-up programmes via schools, communities, and offices. Not only do these initiatives raise recycling awareness and create income opportunities but push recycling levels to new heights.

It is part of Mpact Recycling’s mission to develop practical, economically viable and environmentally sustainable solutions that bring the world closer to a true circular economy. 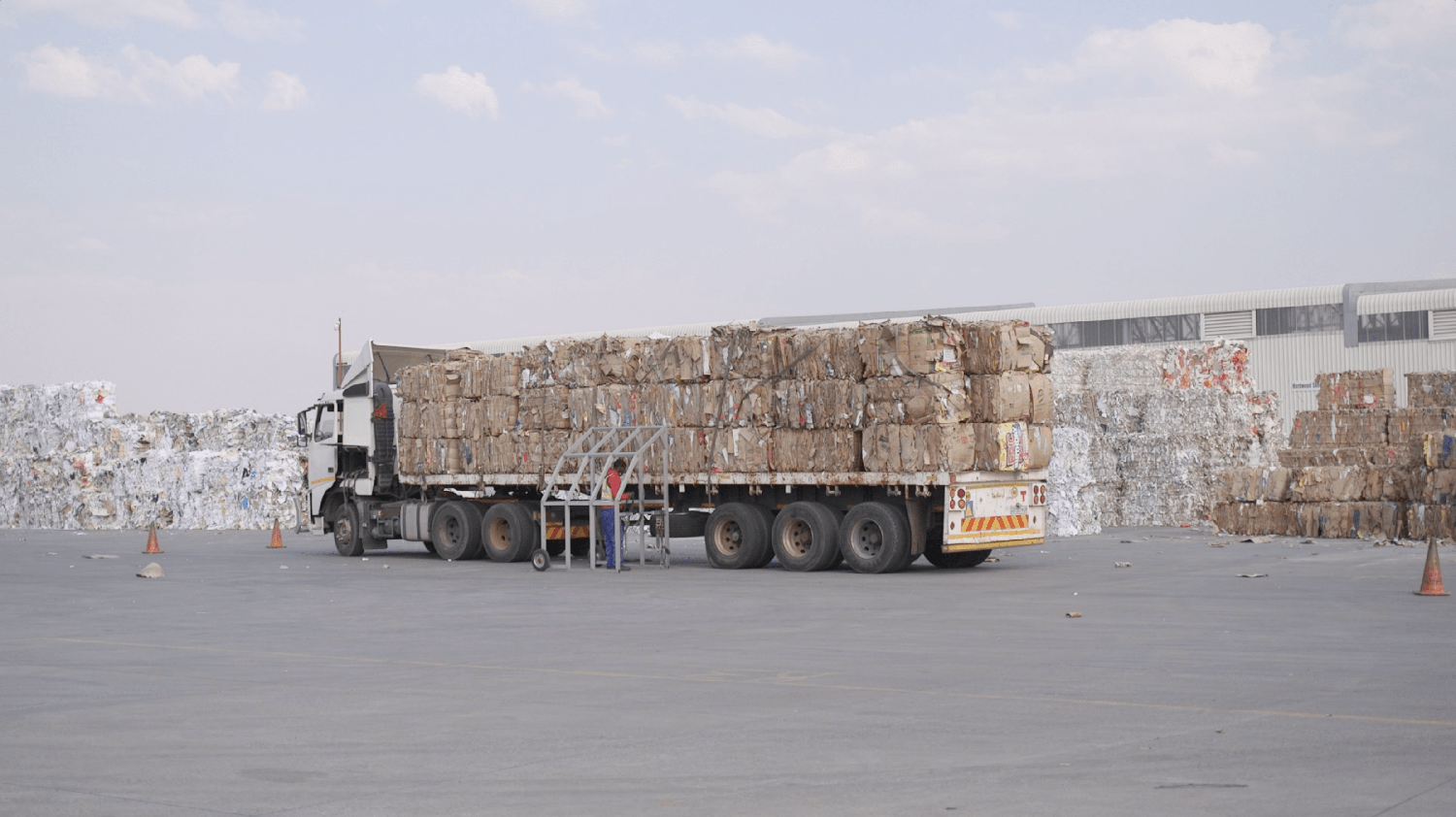