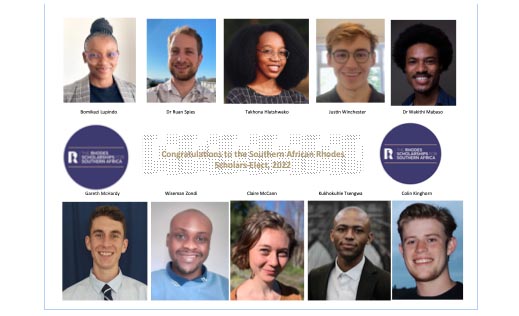 Ten exceptional young people from Southern Africa have been announced as Rhodes Scholars-Elect for 2022 including a graduate from eSwatini, thought to be the first from that country, and two Scholars hailing from the same small town in the Eastern Cape.

Our 2022 Rhodes Scholars-Elect are diverse in backgrounds and disciplines; but all share the following qualities: academic excellence and intellectual curiosity; energy to use their talents to the fullest; courage to lead and make a difference; moral force of character, quiet determination and integrity; and a commitment to service and making a positive impact on the broader community.

For the second year in a row, the global pandemic required the Rhodes Trust to be agile and resilient. Travel restrictions and lockdowns still in place in September 2021, resulted in virtual selections taking place over the following two months in Southern Africa.

Our finalists and selectors did not disappoint. Across the sub-continent the selection committees rose to the challenge; seamlessly facilitating virtual selections across 10 regions.

“In 2021 applications for the Southern African Rhodes Scholarships increased by 17%. Our selection committees were spoilt for choice and had excellent applicant pools from which to shortlist candidates for interviews. Overall, the virtual selection process has been iterative and thorough, rigorous but fairly implemented across the regions in Southern Africa.”

“We are excited by this new cohort of Rhodes Scholars-Elect, who have graduated from universities across our region, with six coming from UCT (University of Cape Town). For the first time ever, a graduate from eSwatini has been awarded the BLMNS Rhodes Scholarship. Two of the 2022 Scholars-Elect hail from the same rural hamlet, Matatiele, situated at the junction of the Eastern Cape, KwaZulu Natal and southern Lesotho –what are the odds?”

“The Scholars selected have studied a panoply of subjects at the tertiary level, ranging from economics and philosophy, to law and industrial engineering, to medicine and psychology, to electrical engineering and development. All are academically gifted, socially committed, and exceptional young leaders, who we believe will have impact on Africa and the world in the years to come.”

The 2022 Rhodes Scholarships for Southern Africa have been awarded to (in alphabetical order):

(To read more about our 2022 Southern African Rhodes Scholars-Elect, please see the profiles at the end of the press statement.)

The Covid-19 pandemic has highlighted the need for courageous, impactful leaders, working across borders and across disciplines, collaborating on big global issues and seeking solutions. People of vision, dedicated to service of others.

Described as “a globally inclusive and thoughtful community of leaders”, the Rhodes Scholarships are awarded to young graduates of outstanding intellect and character, with proven leadership abilities and a commitment to service. The awards are granted to high potential all-rounders and are based on talent and excellence, irrespective of the field of study. Selection of Rhodes Scholars is made without regard to gender, gender identity, marital status, sexual orientation, race, ethnic origin, colour, religion, social background, caste, or disability.

The Rhodes Scholarships were first awarded in 1903 (https://www.rhodeshouse.ox.ac.uk), following a significant bequest. Annually, more than 100 Rhodes Scholarships are bestowed to high achieving, young graduates from 60 countries across the world. The ten Southern African Rhodes Scholars will join a further 92 international students in Oxford, who will make up the Class of 2022.

A list of Rhodes Scholars from Southern Africa reveals a distinguished cohort committed to their country, to impacting positively on the lives of their fellow South Africans, and to standing up for the world. Notable South African Rhodes Scholars include, amongst others: