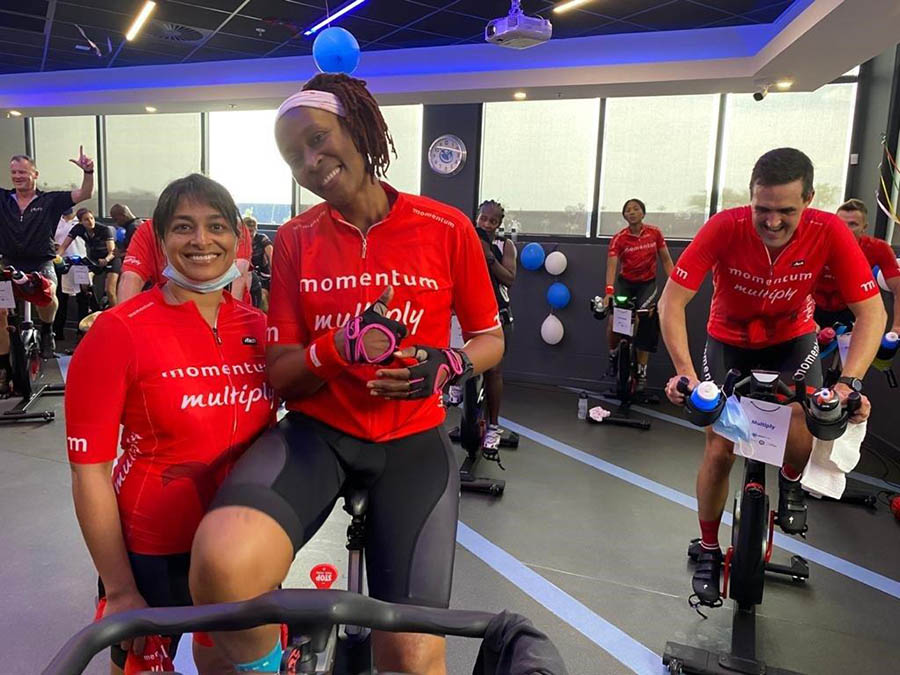 Along with seven other physically-impaired champions, athlete Tracy Mckay has proven that living with a disability is no barrier to achieving your goals, with the recent attempt of breaking of a world record.

In October 2020, famed mountaineer Saray Khumalo and breast cancer survivor Cindy van Wyk attempted to break the Guinness World Record for the most funds raised during an 8-hour cyclothon – a stationary cycling event – and they did it all in the name of digital literacy.

Supported by Momentum Multiply, Planet Fitness and Vuma, and thanks to the tireless efforts of 138 cyclists, #Spin4Literacy raised over R704 000 for iSchoolAfrica, a digital literacy programme that empowers rural schools through the installation of digital libraries. The #Spin4Literacy initiative is currently undergoing Guinness World Record certification for the most funds raised during an 8-hour cyclothon.

What made the exercise even more inspiring was the fact that not every person who participated was considered able-bodied.

Surfer, swimmer, and now world-record-breaking cyclist are just a few of the titles used to describe Tracy Mckay. And while she may also be medically classified as a paraplegic, this is one title she refuses to define her. It was Mckay’s determination and passion for breaking barriers that made her the perfect companion to Khumalo and van Wyk in their record-breaking attempt.

“This was a challenge that was impossible to turn down,” says Mckay. “While the race was gruelling, I saw it as an opportunity to show that anything is possible when you put your mind to it.”

While Khumalo cuts an impressive figure as the first black African woman to summit Mount Everest, two of the Durban-based teams at #Spin4Literacy, Made For More and St Giles Association for the Handicapped, provided even further inspiration to spectators and participants alike.

Team Made For More – representing an organisation that empowers people living with disabilities to discover their abilities – saw Mckay join double-amputee Dave Williams, visually-impaired Sabelo Ngema, and wheelchair-bound Natashia Siebert on their bikes in a quest to raise funds to help address the digital divide that impacts South African children.

The funds are managed by iSchoolAfrica which installs digital libraries in rural and township schools across all nine provinces in South Africa. Each library consists of a mobile iPad lab supported by curriculum-based apps, award-winning numeracy and literacy software, teacher training modules, dedicated programme facilitators, and mentors who guide learners in their studies.

The iPad-based learning programme includes solutions for children with disabilities such as autism, visual impairment, deafness, cerebral palsy, motor functionality and dyslexia. As such, iSchoolAfrica is setting up a digital library in the South Coast of KwaZulu-Natal at a special needs education centre as a tribute to the disabled teams that took part in breaking the record.

Says Mckay, “We live in a digital world that has enabled people like me to accomplish more than I may have been able to in the past.

“While I may be physically impaired, digital tools give me the mobility I need to more easily go about my daily life. Yet, there are those with disabilities who do not have access to these digital tools. A library like this will open their minds to the possibilities that the digital realm presents, and thus open up their worlds,” says Mckay.

Khumalo concludes, “Tracy and the Made for More and St Giles Association for the Handicapped teams proved to us that it is within our power to overcome our circumstances and personal obstacles, but it is also our responsibility to help others do the same. We hope that these digital libraries will assist our children in paving their own way towards a brighter future.”

To help South Africa’s children bridge this digital divide, donate to #Spin4Literacy and support Saray Khumalo and her fellow cyclists in maintaining the momentum they have pedalled so hard to create. Donate now.

Admin135Good Deeds, NGO0
We use cookies on our website to give you the most relevant experience by remembering your preferences and repeat visits. By clicking “Accept All”, you consent to the use of ALL the cookies. However, you may visit "Cookie Settings" to provide a controlled consent.
Cookie SettingsAccept All
Manage consent