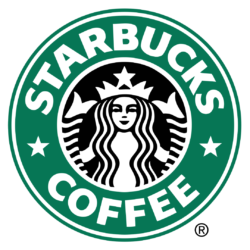 In a Commencement Speech for Arizona State University (ASU) Howard Schultz talks of opening the first two stores in SA and his discovery of UBUNTU.

It is inspiring, compelling and heart-warming, and worth the read!

“I would like to begin my time with you today by sharing a personal story.

Last year, Starbucks Coffee Company opened our first store in South Africa in Johannesburg. I had never been to South Africa before, did not know what to expect. Certainly could not be prepared for the level of poverty and what I saw in the townships throughout the city. We opened two stores and lines were out the door in anticipation of Starbucks coming to the market but before we opened the stores, I gathered the 50 young people who would embrace the green apron and represent the company. I sat with them for a few hours and wanted to hear each one of their personal stories.

As they were sharing their stories with me, despite their poverty, their plight in life, there was so much joy and gratitude in their hearts. But what I learned was two things. One, all 50 of these young people had never had a job before. They were all unemployed for their entire life and you should see the self-esteem and the sense of security as they were getting ready for their first job. But the second lesson was as they were going around the room and talking to me about their story, I kept hearing an African word I had never heard before. A word that Nelson Mandela used all the time. The word is “Ubuntu” and finally, I got up the courage and I asked what does this word mean that you keep using. They couldn’t wait to share it with me.

As I have the honor to speak with you today, I ask you to keep that story in mind because everything I’m going to share with you today is through the lens of ubuntu.

I grew up in Brooklyn, New York, in public housing. The projects as it was called back then. My parents were both high school dropouts, and they could barely afford $96 a month rent in our two-bedroom apartment for my brother, my sister and my parents.

However, from my earliest of memories, my mother instilled in me her belief in the American dream and the promise of America. That a good education and hard work will open the doors to a better life, and that provides me with an important lesson to share with you all today. That your station in life does not define you and the promise of America that is for all of us.

When I was 7-years-old, I had a defining moment in my life. I came home from school one day and saw my father laid on a couch with a cast from his hip1 to his ankle. He had a series of terrible blue collar jobs as a high school dropout, army vet, but this particular job he had in 1960 was probably the worst.

He was a truck driver delivering and picking up cloth diapers before the invention of Pampers. He fell on a sheet of ice in March of 1960, and in March of 1960, if you were a blue collar, uneducated worker, you were dismissed if you had an accident. No workers’ compensation, no severance, no health insurance and I saw the fracturing of the American dream and I saw my parents go through hopelessness and despair at the age of 7. And those scars, that shame, that is with me even today. 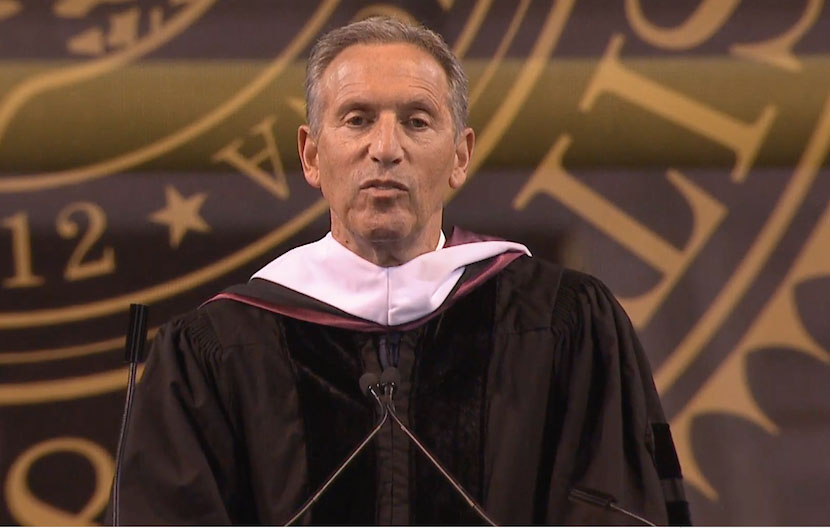 As a young boy, I could have never imagined that I would one day build a company of my own, let alone a company that would have more than 26,000 stores in 75 countries and employ more than 300,000 people.

But from day one, I really wanted to build the kind of company my father never got a chance to work for. A company that honors and respects the dignity of work and the dignity of all men and all women. And that is why we became the first company in all of America to provide comprehensive health insurance 30 years ahead of the Affordable Care Act, as well as ownership in the form of stock options for all of our employees, including part-time people because it is my firm belief that success in business and in life is best when it’s shared.

Starbucks Coffee Company went public in 1992, and from 1992 to 2006, we were on a magical carpet ride in which everything we did turned to gold. But in 2007, the music stopped. We had lost sight of our shared purpose and our guiding principles, in which growth and success began to cover up mistakes and a disease set into Starbucks. That disease, hubris. We lost our way and believe it or not, we almost lost the entire company.

During this cataclysmic period, I was reminded what it means to love something and the responsibility that goes with it, as well as an understanding that leadership and moral courage is not a passive act.

My partners and I took it personally, and we transformed the entire company. We galvanized the entire organization around our core values and servant leadership. Every business, every organization, even every family, must be true to its values and reason for being. Our core purpose and reason for being then and now has always been to achieve the fragile balance between profit and humanity.

Today the equity of the Starbucks brand has never been stronger and our track record of creating shareholder value and social impact over the last 25 years has virtually been unparalleled.

We have built one of the most respected and recognized brands in the world, with the view that today the rules of engagement for business and business leaders have changed. That we must do more for our people and the communities we serve. And most importantly, that not every business decision is an economic one. And that success is not an entitlement. It has to be earned and earned every day through the lens of humility.

Only in America can a poor kid from public housing have the privilege and the honor to be the commencement speaker at the largest and most innovative university in the country.

I stand before you as living proof of the American dream. Joining many of your parents, your professors and generations of graduates before you. But today, you may question the strength of that dream and the promise of America. That’s fair.

My generation has not made it easy for you. Our political leaders on both sides of the aisle have not acted with enough courage, nor honesty in addressing the long-term challenges we face. They have been more focused on fighting with each other than walking in the shoes of the American people and vitriol rules the day in Washington.

I’m extremely optimistic, especially when I look out and see you, because the future is not up to them, not up to Washington, it’s up to you. 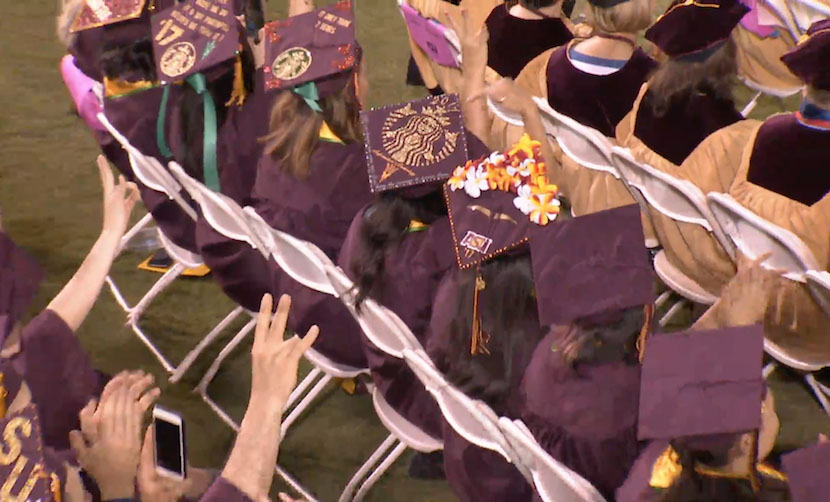 This milestone in your life may come with some anxiety about what tomorrow holds and you may have questions that only time can answer.

But as a young man, who once sat nervously at his own commencement, I encourage you to always trust yourself and to be mindful of these three enduring questions: How will you respect your parents and honor your family? How will you share your success and serve others with dignity? And how will you lead with humility and demonstrate moral courage?

You are leaving this campus as the best prepared generation in the history of our country. You each possess entrepreneurial spirit, the passion and the commitment to create the future you deserve. However, don’t stop there. Try not to rely only on what you have learned in the classroom.

Summon your compassion, your curiosity, your empathy towards others and your commitment to service. Give more than you receive and I promise you, it will come back to you in ways you can’t possibly imagine.

Each of you is here today because of someone else. A parent, a sibling, a teacher, a neighbor, a mentor, someone who had faith and confidence in you, like my mother had in me, and nurtured your dreams.

As you leave here today, take a moment to think of those who have come before you, who have helped you along the way, who are at your side today.

If they are here, embrace them and thank them for the gift of education and for the support and the love that they have given you.

Your generation can bring people together like no other. You can innovate, create and lead. Your generation will transform our economy and create millions of new jobs. You will develop cleaner energy. You will make it so racism only exists in history books. Yes, you will. You will be the generation that teaches the world that we are at our best when we recognize, respect and celebrate our diversity. You can and you will make your mark on our country and our shared humanity. Dream big, and then dream bigger, a more innovative dream, a more inclusive dream.

All of you will preserve and enhance the promise of America. The promise that propelled me out of public housing. The promise that will propel you forward, regardless of the color of your skin, your religion, your gender, your sexual orientation or your station in life.

Go forward and continue to make your parents and your family proud. God bless you and thank you and congratulations to the class of 2017! Thank you! Ubuntu! Thank you!