We could call it a ‘double impact’ initiative! First, The Big Issue aims to move unemployed people into the formal job market. Moreover, spreading good news in a magazine gives the South African people a way of making positive change happen.

We could call it a ‘double impact’ initiative! First, The Big Issue aims to move unemployed people into the formal job market. Moreover, spreading good news in a magazine gives the South African people a way of making positive change happen.

Since 1996, The Big Issue gave a work to 17 000 people around Cape Town – and has a major presence in most metropols. These persons distribute the magazine to passers by, they work with dignity and manage to improve their lives. 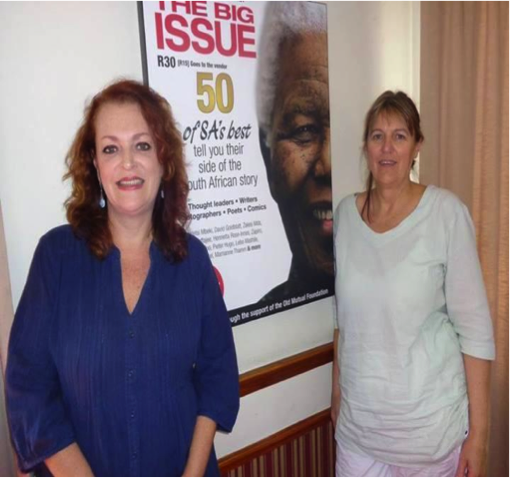 Why was The Big Issue created?

Trudy Vlok: “The Big Issue was created as a response to the problem of poverty in the streets of Cape Town, and the fact that there were no economic opportunities for people to be able to take care of themselves, and feed themselves and their families. People were dependent on hand-outs. The Big Issue was a way to provide job opportunities for people who don’t really have skills and don’t have access to job opportunities, so they could earn their own living.

How does it work exactly today?

“The way that it works is that someone who is unemployed and who needs to make an income can come to us, we start them off with The Big Issue magazine, which is the job-creation tool. They go out and they sell it, and they make money. Then they come back, and from then on, these people purchase the magazine and sell it for double what they paid, the profit is their income.

They become small business people in their own lives, they have to manage their money, manage their stock, manage customer relations… so an important part of what they do is the dignity of working for yourself, and actually doing something of value.

“Yes, we have a program about formal job placement, where vendors who show an interest can move forward into the formal job market. We help secure the necessary training and we help with placement.

That is called ‘a move-on program’, and we move on hundreds of vendors every year.

What are the main results that you are proud of?
“I think the things we are the most proud about is mostly personal – everybody has a different thing. I would say that over time we have provided work for over 17 000 people, and in that time people have earned 20 million rand. They have earned by themselves, through their own work, with dignity, and they have been able to take care of themselves and their families, without having to beg. That is what we are to most proud of.

“Glynis O’Hara, Editor: The Big Issue has at least two aspects. The first is about good news and spreading the word about people who are agents of change especially, and people love those stories, because they are overwhelmed by deluge of bad news usually on television, on newspapers… so that is very popular!

The second is about ‘big issues’, so we try and tackle ‘big issues’ in SA: something that is a special report or an investigation, and a current issue. So, there is always something serious as well, but it won’t be what you read in a normal newspaper at all.

Could you give three words that can describe the spirit of The Big Issue?

Since the beginning of The Big Issue, what was the biggest difficulty you met?

“I think for The Big Issue, forever, the biggest difficulty is… raising money. It is a sad thing but it is. We have a social mission that makes a difference to thousands of people’s lives, but we need to raise money to fulfil that mission. That is always hard, every time.

Today, a lot of young South Africans want to embark on an entrepreneurial adventure to help society, could you give them some advice?

“The best advice is that you have to really believe. You have to be able to hold on to your passion, just fight all the setbacks, and you will have to not let the cynics squash you.

“It is really about you. Be connected and be about to hold on the beliefs and that passion despite anything else is happening around you. Not an easy thing, but that the only way to make things happen.

How do you see your organization in five or ten years? What are the big challenges of The Big Issue?

“Our five and ten year goals are to have the national full print. Making the Big Issue available for poor people in other cities, so they can use it to better their lives and we can get more exposure around the country. Our challenges are financial.

“I have been here for 17 years, and every day, in some way, I am reminded of why I love doing it. I think it has got a lot do with the fact that we work through trusting the people who are most impacted by the work that we do, and on a daily basis you can see how people are changing their lives, because we happened to be here. I think that is important.