The latest update to The Economists’ Big Mac Index for the start of 2021 shows that the rand is still one of the most undervalued currencies globally.

In the mid-2020 index, the local unit was found to be the most undervalued in the report, but has started 2021 on a slightly better footing, thanks to global optimism about a Covid-19 vaccine, and an end to the battle for the US presidency.

The Big Mac Index is an initiative created by The Economist that aims to measure whether currencies are priced at their “correct” level.

It is based on the theory of purchasing-power parity (PPP) – the notion that, in the long run, exchange rates should move towards the rate that would equalise the prices of an identical basket of goods and services (in this case, a Big Mac burger) in any two countries.

The Big Mac is selected for comparison as the popular fast-food meal is widely available across the world, and remains fairly consistent in pricing; however, it is by no means an exact science.

The index has however, become a global standard, included in several economic textbooks while also becoming the subject of at least 20 academic studies, the group noted.

The difference between this and the actual exchange rate – R15.52 to the dollar at the time of the report – suggests the South African rand is undervalued by 61.9%, which is the fourth most undervalued currency measured by the index in July. 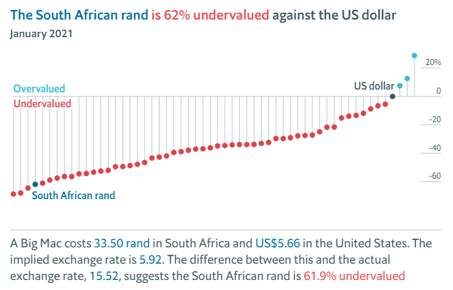 However, the raw index does not tell the full story of currency valuation.

Because many argue that, due to PPP, the cost to produce a Big Mac is cheaper in poorer countries than in richer ones, The Economist factors in another important indicator – GDP per capita – to draw a more accurate conclusion. 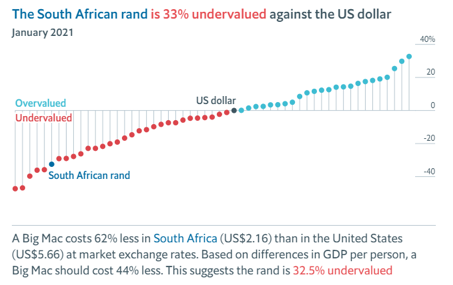