I came across Ian von Memerty’s review of the book “Factfulness”written by Hans Rosling recently. Because of the ongoing contest between ‘good news’ and ‘bad news’ in the work I do, I ordered it immediately and found it a fascinating read, it makes the fundamental point that we divide the world into two distinct sides; good vs bad, because this is:

Hans Rosling, writes “Journalists know this. They set up the narratives as conflicts between two opposing people, views, or groups. They prefer stories of extreme poverty and billionaires to stories about the vast majority of people slowly dragging themselves towards better lives. Journalists are storytellers. It’s easy to report on all the bad things happening in the world, it’s much harder to report on the good things, billions of improvements that go unmentioned. Do people have a worldview dated to the time when their teachers left school? Do teachers promote a fact-based worldview in their classrooms?” 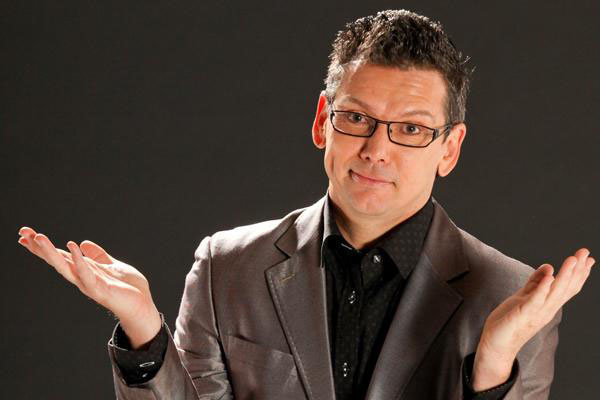 ‘Factfulness’ explains why being negative is in our DNA and is always a default position – BUT if you choose a fact-based framework you will begin to see the world as a very different, and much more positive place – Steuart Pennington.

Ian writes “Factfulness is a fascinating read and, if you accept Rosling’s arguments, it is a book that cannot help but shift your perception of the world and help calm your reaction to the daily onslaught of looming disaster. 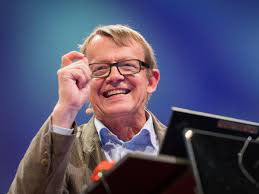 During Roslings long and varied career he realised that experts in many fields were routinely operating on assumptions that were completely at odds with the data. By the end of his life he had lectured at the United Nations, the Davos World Economic Forum, multibillion-dollar corporations, the leading financial and education institutions around the globe and had changed the way the United Nations assessed the financial status of individuals and countries.

Everywhere he lectured he would also test the audience about the facts (data) which would affect the decisions in their fields of speciality. The results were gobsmacking – women’s activism groups, finance ministers, documentary filmmakers, statisticians got the answers wrong by massive margins – between 52% and 94% of their answers were wrong, across a whole range of topics. These were highly educated, intelligent and informed experts, and they were scoring worse than chimpanzees on multiple choice questions.

One example: In the last 20 years, the proportion of the world population living in extreme poverty has:

The correct answer is 3, but in their online polls, in most countries, less than 10% of respondents got the answer right. (Likewise, in SA we claim that poverty has worsened over the past 20 years, the facts tell a different story)

The two major questions he faced were – First – Why? Answer, our human intuition is informed by personal bias, outdated facts and news bias. Our negative view of the world is essentially misinformed bias.

Second – How do we change that? In an easy-to-read and well-thought-out way he presents his conclusions. It is a detailed and comprehensive book, which I cannot attempt to summarise, but I have four main takeaways from this book.

The first takeaway is that the “negativity bias” which we read and swallow daily is an evolutionary redundancy which has not yet been able to adapt to the massive developments of the last two centuries. In our very recent past, all humans had to be wary, fearful and sceptical, otherwise you were far more likely to be killed, attacked, and robbed of both your food and your family. This is in our DNA and influences the way we see the world, and the way we assess media articles and online and television stories which have no possible chance of affecting us immediately. (So for example the swine flu epidemic of 2009 killed 31 people in two weeks, and generated roughly 8,000 articles per death. In the same period 63,000 people died of TB, and those deaths passed by without comment, so we didn’t notice! Likewise the French were asked to estimate what percentage of their population was Muslim, the average answer was 40%, the fact is that it is 4%.)

My second takeaway is our inability to grasp this central and confusing fact – “things are bad but they have never been better”. The clearest example he gives is that in 2016, 4,2-million babies died globally. In isolation that is an horrendous figure. But as he puts it , it also a beautifully small number, because in 1950, 14.4million babies died and the number has continuously dropped every year (most data is from United Nations and GapMinder and can be independently verified in the bibliography of the book).

He supplies an endless stream of global data about health, democracy, income, population, nutrition, disease – which prove that a bigger percentage of people live better lives every day than the day before. It does not mean we need to stop fighting to improve the world, but it does mean that we need to know that we are succeeding – everywhere. (Bill Gates reminds us that fewer people live in poverty today than ever in world history – TIME Jan 2018)

My third takeaway, is that we still use the terms first world and third world as valid definitions although they have been outdated since 1963. Every country in the world has people who live in four income groups:

Of the seven billion on the planet today,

The ‘middle’ is groups 2 and 3, where five billion people live with most of their basic needs met. Every year the middle gets wealthier, healthier and live better lives by every measurable definition. Which means that tomorrow’s markets are not in the West, it is those huge hordes of individuals who have more to spend today than they did yesterday. By 2030 rich consumers in the ‘third world ‘ will outnumber rich consumers in the ‘first world’. There will be ‘one world’. 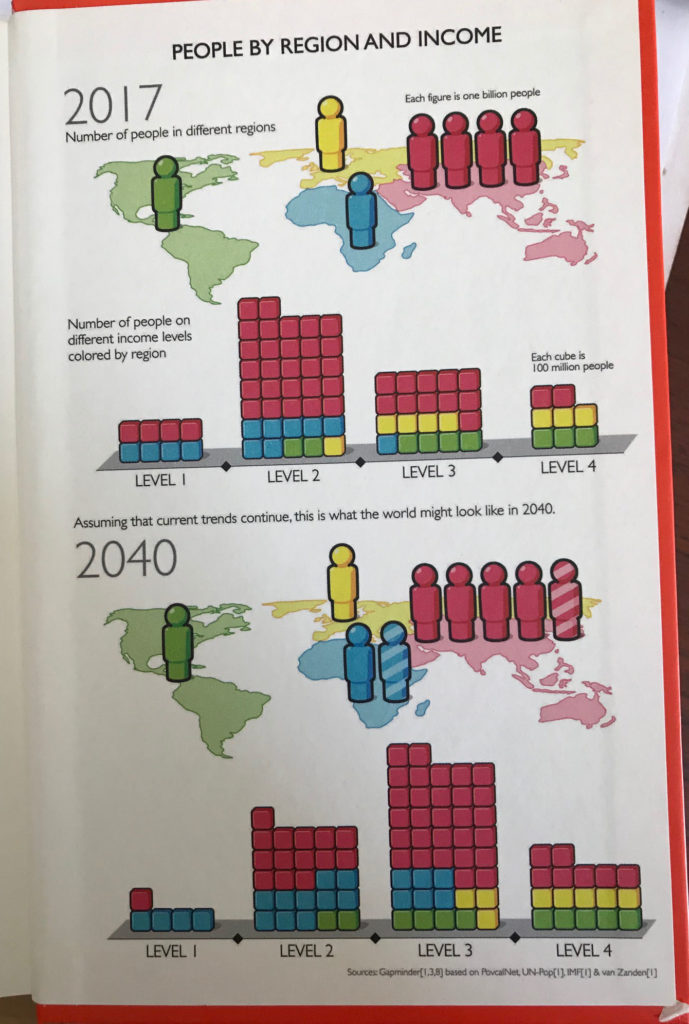 And my fourth and most important takeaway is this, that as we swallow the news, we need to actively “not believe” the quickest simplest explanation which affects us viscerally and emotionally – and assume that things are getting worse. We need to make sure that we are seeking two measurements at least, two facts, that will mean that we can begin to see a bigger picture.

The facts tell us that murder has declined by 50% in SA over the last 20 years, and is lower than some countries in the ‘measured’ world (150/235 countries don’t report the crime stats); if inequality is measured, not just by income, but by access to formal housing, fresh water, electricity, education, social grants, technology, and healthcare SA as become a much more equal society; if the impact of the NGO sector on education was incorporated as well as the number of black matriculants entering tertiary institutions the measure would be very different.

As Hans points out over and over again, the people that complete the questionnaires that give rise to these ‘labels’ make assumptions that are simply wrong, and not based on fact.

Ian gives an example “Recently the 50-year-old black old man who works for us one day a week had a psychotic episode (the first of his life). His friends among the shacks where he lived have cellphones and so were able to phone for an ambulance, which took him to a hospital where he was treated for three weeks, before being assessed and transferred to a state psychiatric facility. (When I visited him there it was clean and efficiently run by helpful staff.) He was treated and he is given monthly medication – all of this for free; which means that he has been able to get back to work and start reclaiming his life.”

I shudder to think what would have happened to him had he had that breakdown in 1990.

The statistics alone did not tell the picture of how the life of that poor community has improved. I needed both the local and personal and national perspective to get a more accurate picture.”

Things are bad – but they have never been better.

Rosling became internationally famous with a series of arresting visual displays on YouTube that went viral proving that we were ALL hopelessly out of touch with the facts. View those visuals Testimonials, here, here and here. (Watch these they are terrific)

They are easy to watch and give an easy kick start into the actual realities.

But his book intrigues. Buy it and try it – if for no other reasons than that you will feel more in control, more hopeful and better able to inform yourself. DM

Getting better every day – despite the appearance of things